I decided, after the last couple months, that I was going to cancel this subscriptions. The last few boxes have been very disappointing and, to be honest, I didn’t even want this one. However, I didn’t cancel in time, so I was charged for one final box, the theme being “Dressed to Kill”. I’m not hopeful going in, but maybe I’ll be proven wrong.

As an aside, originally, this box was supposed to feature a set of Deadshot cups, but the they apparently arrived to the Nerd Block headquarters with cracks and scratches in them, so the box was delayed while they found a replacement, hence the lateness of this review. So, let’s start with said replacement item, shall we? 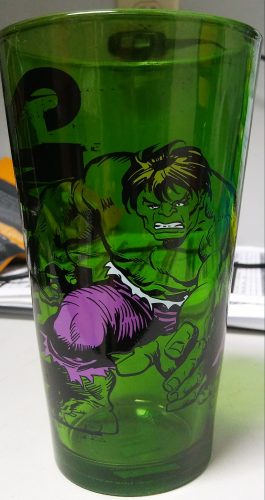 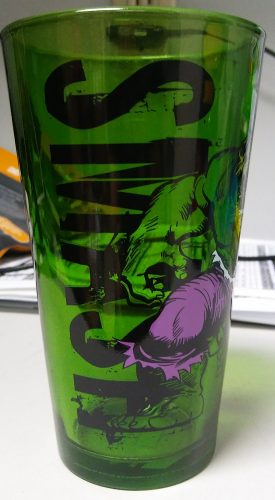 It’s a glass tumbler featuring The Incredible Hulk, which is a replacement I am fine with. It will get plenty of use, and it looks nice. Plus, I have very little interest in Deadshot, not to mention that the cups in question were apparently made of plastic, which just sounds incredibly cheap. No wonder they were all broken in shipment.

Next item? The monthly lapel pin. 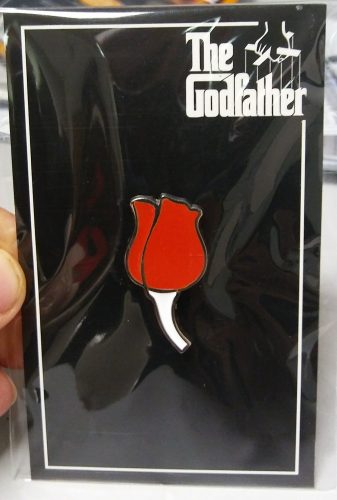 The pin itself if fine, I guess. However, and I know I’m in the minority on this, I don’t give a single damn about The Godfather franchise. Not one. I found the movies very “meh” at best, so this does nothing for me. I’ll throw it in with the rest of the other thousand pins we have, but I’ll never wear it for any reason. 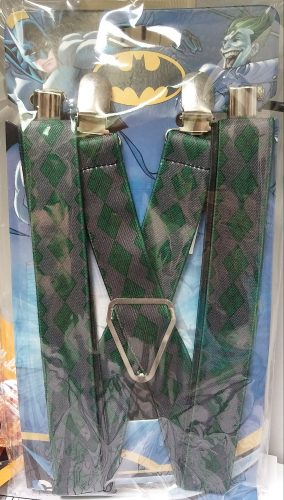 Suspenders? Really? Okay, this is the second set of these I’ve gotten in these boxes (with different themes), and I couldn’t care less either time. These are supposed to look like a pair of the Joker’s suspenders, and even as much as I love the Joker, this is stupid. I’m not a 10 year-old, I’m not a senior citizen and I have no plans of ever cosplaying as the Joker or anyone else that requires suspenders, so this piece of crap is going on eBay (where it probably won’t sell, for obvious reasons).

If one lousy Joker item wasn’t enough, we got two! The second is a piece of artwork. 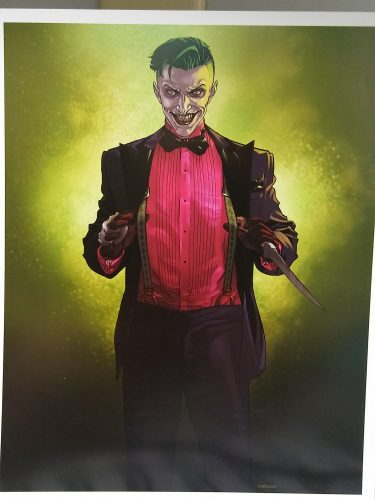 While the artwork itself is good, this is the worst interpretation of the Joker I’ve seen not played by Jared Leto. He seriously looks like the hipster/emo version of Dante from DMC: Devil May Cry took a bunch of amphetamines, with a little bit of Oswald Cobblepot from Gotham thrown in for good measure.

Onto the next franchise, we’ve got something from Anchorman, a franchise I literally own nothing from, save for the first movie. 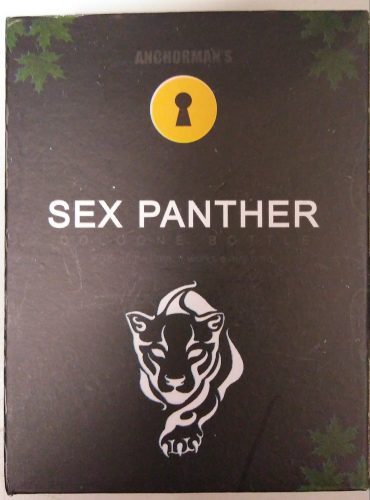 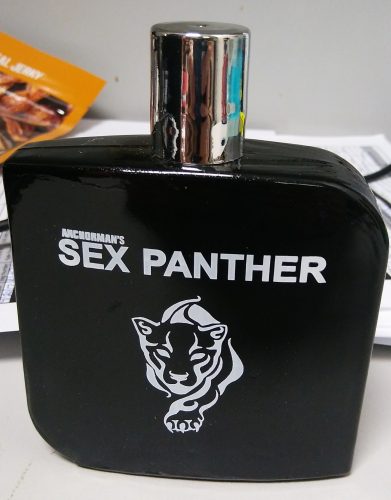 Now, when I first saw this in the box, I didn’t read the front of the packaging all the way and thought this was actually a bottle of cologne. I don’t wear cologne, but the missus likes it when I do (if I do), so I thought maybe I’d get some use out of this.

Turns out it’s nothing but a bottle you can PUT cologne in.

So, let’s get this straight: It’s a bottle for you to put your cologne in, which ALREADY COMES IN ITS OWN BOTTLE WHEN YOU BUY IT. What the hell is the point of this? Who in their right mind wants to take the time and energy dumping cologne from one bottle to another? What would be the point? Who would you be trying to fool? And why? Also, I don’t know if you’ve ever poured cologne out of a bottle, but it’s a chore. Cologne doesn’t pour well, and you’d likely spill half the bottle, wasting money along with time. What a useless item. I guess I’ll put it on display on my desk, but honestly, I don’t care.

And finally, we get the monthly t-shirt. 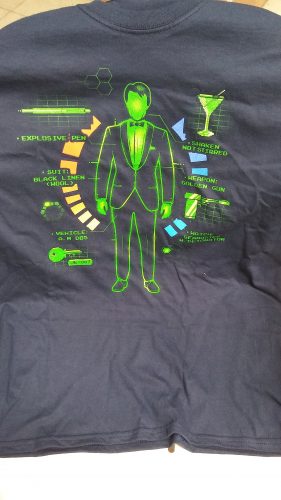 It’s a t-shirt featuring the world’s favourite secret agent, James Bond. Well, everyone except me, I guess. Much like The Godfather, I just have never been interested in this series. A few of the Sean Connery and Roger Moore movies were decent, but nothing I ever got excited to see or wanted to have in my collection. And honestly, even if I were more interested, this shirt would be disappointing. It’s such a generic design with a bland colour palette. The Bond shirt we got in a Loot Crate a couple years back was more interesting, even though it featured a simpler design. Unless one of my friends buys this, it’s going on eBay as well.

Overall, this is easily the most disappointing box I’ve ever gotten in any subscription box, ever. It makes me even more glad I canceled my subscription with Nerd Block. Aside from the Firefly Cargo Crates, I am done with these subscriptions for a while. I may do Japan Crate or Doctor Who Block after Comic-Con season is over, but right now, there’s just no real reason to keep going with them.

Alright, that’s it for me and Nerd Block. It was fun at first but didn’t take long to feel like a waste of money. I’m not sorry to keep my $25.00 every month that used to be reserved for them. So long!

I am straight edge and a freelance writer currently working for several sites. I also do personal training. Currently, you can see my weekly WWE Smackdown recaps on CamelClutchBlog.com, video game reviews on BurningAngel.com (warning: although I only write game reviews there, it is an adult entertainment site) and mostly wrestling-related stuff on Man Cave Daily (mancave.cbslocal.com).
You might also like
AnchormanBox SubscriptionsDC comics