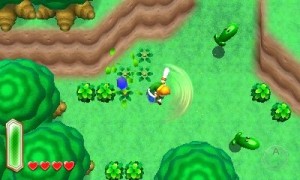 Nintendo have announced today that a new Legend of Zelda game will be released for the 3DS late 2013. As a huge Zelda geek, this is very exciting news, especially since it will be the first original game released for the console.

That’s right folks, whilst the new game, which is yet to have been given a title, is set in the same world as A Link to the Past, it will feature an entirely new storyline and original dungeons.

The game will fully utilize the 3D features as well as involving a new element, where Link will transform into a 2D drawing and be able to walk on walls, something which will be used during puzzles in the game. This feature will also show off the the 3D effects and it really does look pretty swish.

If you have a 3DS, head to the Nintendo eShop right this instant, yes, now, because Nintendo have released a 3D trailer showing off the game play in the upcoming release. And oh my, does it look snazzy. If you head over to the eShop on your console you can download the free video, 59 seconds of pure Zelda bliss. If you don’t have a 3DS, sucks to be you. I was so ridiculously excited when I found out they’d release a 3D trailer that I almost fell up the stairs running to find my 3DS. Did I mention I love Zelda?! 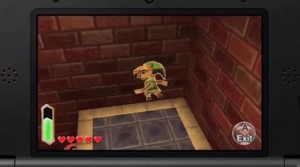 A Link to the Past was originally released for the SNES in 1992 and really is a fabulous game, so utilizing the same world will definitely interest fans of the more retro Zelda games. However, the fact that the new 3DS game will be an original release is rather exciting, as most people were expecting another 3D remake, such as what happened with Ocarina of Time. Not that I’d complain, of course. I’m a Zelda fanatic and have loved each and every game they’ve thrown at us, even those for the abomination that is the Wii. 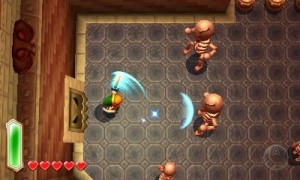 Ocarina of Time for the N64 has, and always will be, my favourite game of all time. I’m obsessed. I have a Zelda tattoo from the N64 era on my wrist and the Hyrule Historia, released earlier this year, is without a doubt my favourite piece of geek memorabilia.

The Legend of Zelda series will always be a hugely popular and successful series, for both old and new fans. It’s a great game for younger gamers whilst also pushing adult gamers to the limit. I mean, some of the temples and dungeons in the earlier games really were a bitch!

I seriously cannot wait for the new Legend of Zelda game because from what I’ve seen so far, it already looks magnificent. The game is yet to be given a subtitle but is planned for a release in time for the holiday season. Well, I know what I want for Christmas!

I'm an aspiring film journalist living in Chester. Into all kinds of geekery from N64 to Xbox, graphic novels, cosplay anime and more. I have an unhealthy obsession with Pokémon and the Legend of Zelda series. So much so that I have two Zelda tattoos and various Pokémon lurking all over my house. In my spare time when I'm not busy being a real person and working, I'm writing or making retro games jewellery. I'm also obsessed with pandas. They're fabulous.
You might also like
a link to the pastbreakinglegend of zelda

The Legend of Zelda: A Link Between Worlds – Release Date and New Dungeon System