How do you begin to explain to someone that you are infatuated with a fictional being? I don’t really think you can.

Throughout the years I have become seriously obsessed with my fandoms. Doctor Who is one of them.

My first experience was with the new revamped series that aired in 2005. At first I found it difficult to connect with the ninth incarnation of The Doctor. He didn’t seem a likeable character at all. I found myself questioning why geeks everywhere were raving about the new series.

It wasn’t that Christopher Eccelston was a bad actor or anything. In fact he was great. He managed to flawlessly create a new personality for our beloved Doctor with seemingly no effort (although I’m sure it wasn’t as easy as he made it look.) 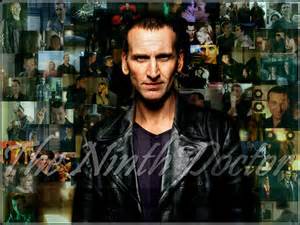 As I got further into the first season of the new series, this new incarnation started to grow on me. His costume was simple, his leather jacket being his most notable item. He was funny yet also had a manner of being serious when it was needed. The chemistry between him and Rose Tyler (Billie Piper) was absolutely chicken skin worthy.

He wasn’t “out there” and flamboyant like his predecessors. This Doctor had a darkness in him. When you looked in his eyes there was also a sadness. Guilt was prominent in his voice. I’m not sure why I feel a connection to characters who are this way. They seem more “real” to me I suppose.

Now imagine Me explaining the series to my husband, a complete jock and closet geek. Can you hear it? My lengthy, long winded description of an alien who saves Earth in his blue box? Yeah, I’m still explaining it to him.

After some time, I eventually went back and watched the series that featured Nine. This time around I focused on the actual doctor more than anything else. Again, I didn’t really like him. Then I got to the episode titled, “Dalek.”

The Doctor and Rose have accidentally stumbled upon a collection of alien artifacts located below the Utah desert owned by a private party in the year 2012. There they discover a lone Dalek. It is then that we really start to see Nine in a whole different way.

The Daleks are an alien race that fought the Time Lords in “The Time War.” The Doctor thought the race to be extinct and shows a great amount of fear as soon as he lays eyes on this lone creature. It is after the creature yells, “EXTERMINATE” that we learn it has been damaged in some way and cannot actually exterminate anything anymore. The Doctor is visibly relieved at this discovery and immediately starts to tell the Dalek what has happened. 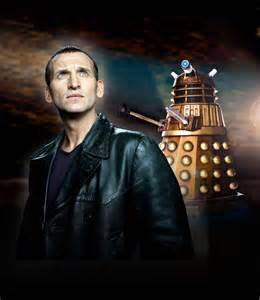 It is this episode that first starts to explain what occurred to make this Doctor so dark. He blew up his home planet in an effort to destroy the Daleks and in the process, he kills off all the other Time Lords. This action effectively left him as the last of his kind. In this moment I felt such a deep sadness and literally almost cried, (I’m overly emotional when it comes to fictional stories.) The look on The Doctors face is gut wrenching. The one thing he has in common with this lone Dalek, his sworn enemy through all time and space. Isn’t that really what we all want to see? Our hero and the villain having something in common like that?

So having never really seen much of Doctor Who until I was an adult, Christopher Eccelston was a perfect choice to get me into the show. After watching his amazing performance as Nine, I knew I had to watch the earlier episodes, (I was all of five years old when it went off the air.) I’m so glad I did. 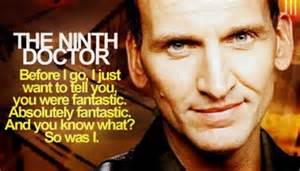 In the end, I felt almost cheated for not having seen the show before Eccelston, and for there not being more of him on the show. Tennant and Smith do a great job as well, but this particular Doctor will always be the one I picture when I imagine The Doctor.

Brittany Thornton aka The Wookie, lives on the majestic islands of Hawaii. A mother of two up and coming geek daughters. A Whovian, a Tolkien lover, a Trekkie and obviously a fan of Star Wars, you'll usually find her on XboxLive, playing Destiny and getting killed... a lot. Want to win her over? Books, bring books. Food helps too.
You might also like
breakingChristopher Ecclestondalek