previous
Isometrics: Ride to Hell: Retribution and the bizarre appeal of the giftedly bad
random
next
Why series about immortal characters should never last more than three seasons...

Welcome to Nitpicking: The series that un-photoshops super models.

For those of you who don’t listen to podcasts, or know me at all, here’s a little factoid about me: I will straight up get into fights over LOZ:OOT. It is the best game ever made, it’s a simple as that. The game has the honour of being absolutely pivotal role  in not only the Zelda game  series but also its (sometimes rather convoluted) Timeline. I love it, but it is no way perfect. In playing through this masterpiece recently, I’ve noticed a few…flaws. Such as:

At the very start  of the game, we witness the Great Deku (pronounced Dee-Kuu, or Dai-Kuu? answers on a postcard) Tree send Navi the fairy to aid young Link on his quest to save the country of Hyrule (more on that later). “It’s time for the boy without a fairy to begin his journey” He says. So Navi (clumsily) makes her way to Link’s house. We have seen  her relationship with the Great Deku Tree to be one of great respect and maybe even love.Her Zeldapedia entry describes her as “one of the Great Deku Tree’s fairy children. Remember that.

So blondie kills the spider (with 4 legs…wha?) which inexplicably kills the GDT, even though it was supposedly the curse that was killing him. After a lengthy, unskippable  cutscene, he goes grey and leaves this mortal plane. Navi’s reaction to this?

This response completely  lacks the shock or sadness one would associate with the death of a loved one. Add this to her constant nagging and interruption to your play throughout the game and we can only logically conclude that Navi just dosen’t give a a flying shit about your quest, your friends and your experience. She will be heard and that’s all that matters which makes her a borderline sociopath. And at the end of the game she leaves, for no other reason than to break your 11 year old protagonist’s heart. There is literally no reason for Navi to leave. At all.  She’s the reason Link gets lost in the forest and has to go through the terrifying ordeal of Majora’s Mask. It’s entirely her fault. and does she care? does she fuck. 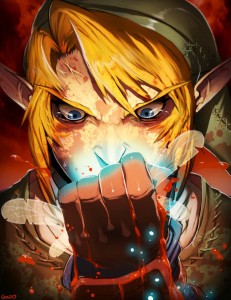 I’m a drummer of 10 years. Sometimes I will come across something incredibly complicated that I think “gosh, I hope future Mike nails this, ‘cos there’s not a snowballs chance in hell I’m gonna crack this doozy!” Then , eventually, I get it. When I finally master said beat, or song, or technique, I smile, or laugh, or cheer, happy that managed it.

What I, or any of my musician friends, don’t do, is this: 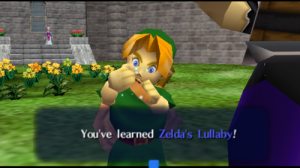 Seriously? what the Jesus-on-a-space-hopper is he doing? Link learned the song, his limbs didn’t just become independent of his body. He’s looking at his instrument like it’s just simultaneously told him the twist ending of The 6th Sense and where the G-spot for guys is.  It makes no sense for Link to make this face. There is no reason for this, I mean the guy is supposed to be The HERO OF TIME. I don’t want to entrust my fate to a guy that is that surprised by an ocarina.No sir. Nuhuh.

You first meet Darunia, King of The Gorons, after saving (murdering) the GDT. You’ve met the lovely princess Zelda, and she’s sent you off on a merry quest. She’s given you a signed letter, allowing you to go all the way up to sunny holiday destination Death Mountain. Then after playing a song ONLY THE ROYAL FAMILY KNOWS to open the door to the Goron King, he completely rejects you. He’s grumpy because there’s a dinosaur in his rock cave ( and fair enough too, I fucking  hate dinos in my rock cave) and purely based on a) your size and b) the fact that he is in a shitty mood he won’t speak to you and refuses to believe you are the royal messenger. That is until you play him another song.

In the space of around 15 seconds Link ( a person he loathed 16 seconds ago) manages to lift his depression, change Darunia’s  mind about him, and give him a sacred Goron gift of the bracelets, which allow you to lift bomb plants and blow a hole in the cave to lay the smack down on some pesky Dodongos.

Keep in mind, at this point you’ve had around 5 minutes max contact with the dude, and yeah, you’ve saved his kingdom but what he does next is astounding. In what is a really awkward custcene, Darunia gives Link the spiritual stone of fire, and then becomes SWORN BROTHERS with him. I don’t even. They ( the gorons) then chase our hero down the hill with the threat of rib-breaking hugs. Eesh. The point is Darunia came on way too strong, way too fast; It’s like if the pizza boy proposed after you gave him a tip. You need counselling, Darry.

That fishing guy looks a little bit like Randy Marsh 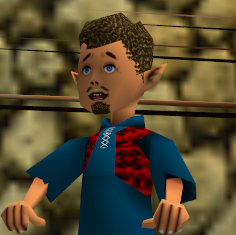 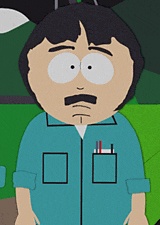 Now you’ll read everything the guy says in Randy’s voice. I’m not even a little bit sorry.

The King Zora is a slow-ass fool

After surviving death mountain, you are tasked with retrieving princess Ruto of the Zora people from the belly of Lord Jabu-Jabu. In order to do this you have to get past the King Zora, who sits at the entrance to where Lord Jabu-Jabu lives. Ruto being his daughter, he is naturally concerned and lets you get past him. This all seems fine but the the major problem is the almost 30 seconds he takes to move his huge ass all of about 4ft. Why did a programmer decide this was a good idea? why do we have to watch it?

Once fat-ass gets out the damn way, Link enters (steady now) Lord Jabu-Jabu to find Ruto and act as a little green renny. The only issue is that this dungeon could IN NO WAY fit inside the fish that swallowed Link.Take a look:

How a fish managed to stay out of water for that long is a question for another day, kids.

Now that’s a big fish, nobody’s gonna’ take that away from Jubby. If we use the pots in the picture as a scale then after the rather sloppy application of maths we can guestimate that this fish is around 70 pots long.Ish.  The mouth cavity alone takes up around 1/4 of his body is the first room of the belly dungeon, the 2nd floor of which looks like this: 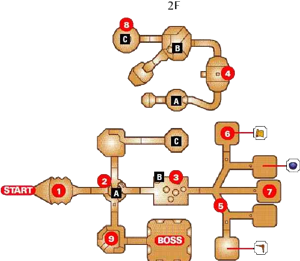 That starting point and room no.1? That’s the entire mouth cavity. Also notice this is just the 2nd floor?  there are another 3 floors inside. Rooms 8 and 4 aren’t even attached, so there’s only one feasable answer (besides chastising me for over-analysis): Jabu Jabu is a Tardis.

Finally, and seriously creepily, the Dead Hand  boss is the worst of all the Zelda series. Found at the bottom of the Kakariko Well, there’s about as much strategy as avoiding sexual assault, or an escaped lion; keep away from the pointy bits and don’t let it grab you. 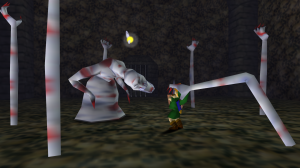 This all constitutes a rather tough childhood for our green-clad hero. But as the old addage goes “It gets better as you get older” . So at least Link has adulthood to look forward to. Right?

Want more nitpicky goodness? wait around for part two then!  Got a game, movie, song or TV show you’d love to pull apart? get commenting below.

Hailing from Kent, England, Mike is a writer, editor and podcaster who has just finished his degree at CCCU. He also is a drummer of 11+years, plays in several bands, and is available for session work. His other interests are Batman, music which doesn't suck and pizza. Follow Mike @The_Dark_Mike
You might also like
breakingHyrulelegend of zelda