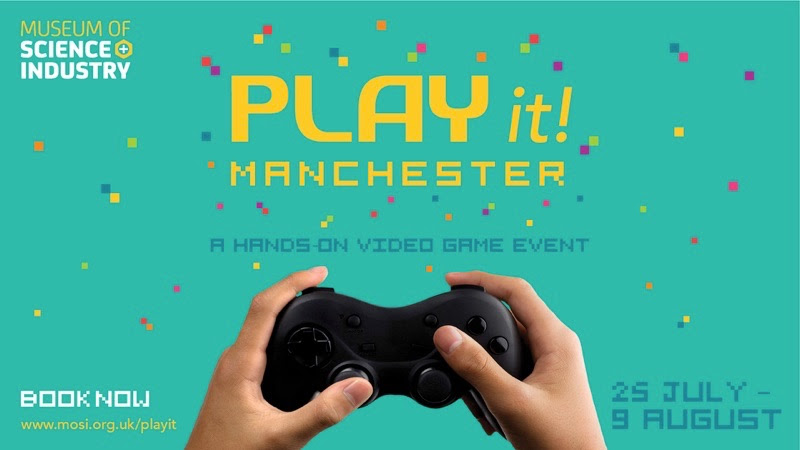 So I attended my first press event and oh man (or woman), I couldn’t be more happy that the Play-It press event was it.

On arrival I didn’t really know what to expect but being greeted with a handful of cosplayers having photos taken was a pretty interesting start and with Mr Geary, Geek Pride’s founder, shouting at a slice of tomato, interesting was definitely the operative word … who said journalism wasn’t fun?

Anyway, I should probably start talking about the actual event now though to be fair…

The Play-It event is the museum of Science and Industry’s latest interactive exhibit, which has been carefully created and managed by the people that bring you Play Expo. Firstly, and I’d say most importantly the atmosphere was absolutely amazing. I say this because I don’t think I’ve ever felt more comfortable, and in some ways, at home at an event than I did at Play-It, part of me wanted to chat, part of me wanted to compete but not a single part of me wanted to leave when it came to closing time.

The room (which was quite sizable) consists of banks of consoles all with a different game; apart from a few dedicated areas made for competitive play, such as the Halo 4 circle, and the golden eye arena as I like to call it. From the original elite on the Acorn Archimedes to Elite: dangerous on the Oculus, you could really see the amount of effort that had gone into planning this journey through the ages of gaming, I even managed to see granny’s Garden which for a lot of people in their 30’s could be the first game they ever played.

I was lucky enough to also chat with a few of the cosplayers that were wandering around the room and as I’d expected, everything they had to say was overwhelmingly positive. A friendly master chief (from Chief Collective) was almost too excited by the night’s free beer and food while Lara Croft (Gone Rogue Cosplay) was happy just to be able to play Tomb Raider.

I cannot express enough how much I enjoyed the night and how much you will enjoy a visit the MOSI’s new exhibit which is running from now until the 9th of August. Bring your friends, bring your family and obviously bring your inner geek.

The Reply guys have done an amazing job of capturing what makes social gaming great and I can’t wait to see them again at Play Expo.

Check out some photos of the event HERE

Nestled in the tranquil reaches of Cheshire lives Jordan, a casual writer and lover of video games. When he's not exploring a dungeon or flying a spaceship, you can bet your sweet ass he'll be complaining about something.
You might also like
GamingMedianews