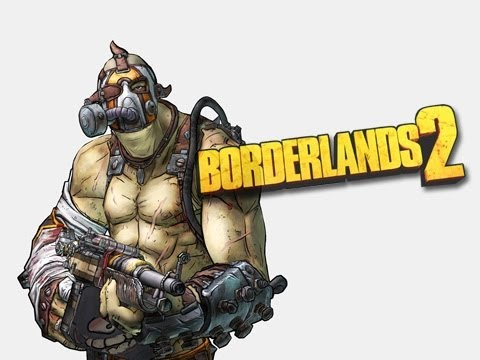 So, my Borderlands obsession, it started with Mordecai. I don’t know why, normally I am not the type to go for that type of character. Normally I go for the big beefy type that runs into a battle with both hands gripping the handles of two mighty war axes, ready to cleave some skulls and shouting at people in the dragon language. Or something remotely similar to that.

I began the first game with that in mind but with this being my first ever first person shooter I decided to go with sometime different. I glanced over the first characters, a sexy woman, I didn’t know what her deal was so I skipped her, Roland just looked too boring and then I saw Brick, he looked like the type to go for but then I spied Mordecai…

When the second game came out I read up on the characters and at first was stuck between Zero (just a number) and Maya the Siren. After much deliberation (my partner was playing co-op with his BFF -n’aww- and I noticed that Zero ran like an idiot) I decided to go with Maya, I was a strong, sexy woman, tattooed and powerful! Maya’s powers were frikken’ amazing, she was sassy, sarcastic and able to take care of herself and ran around with her commando boyfriend phase-locking bandits. Yeah, I get far too into this game. 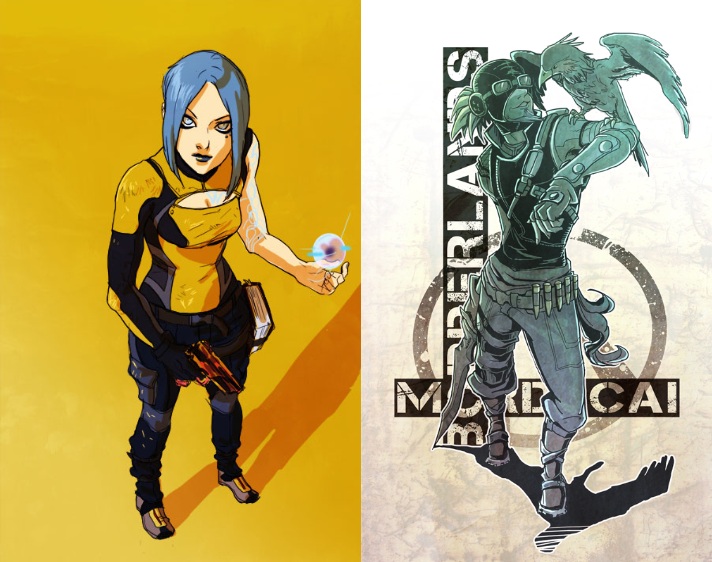 I thought nothing could beat her power- at level 52 I could kill a person with a single phase lock with no gun. I WAS AMAZING.

But then the rumours started, a murmuring between the bandits, someone epic was coming! A badass to beat all badasses. A psycho that could out-crazy all psychos. A vault hunter to out-awesome all vault hunters!!! I was kind of un-impressed at first… Nothing could beat my Siren… Could they? And then Krieg arrived. Roaring things like “BATHE IN THE MEAT CHUNKS!!!”  “THERE’S NO BBQ ‘TIL I SAY THERE’S A BBQ!!!!”  and “NIPPLE SALADS!!””  I heard his shouts and laughed like a maniac and decided to run with him. Shouting my own nonsense at the TV. 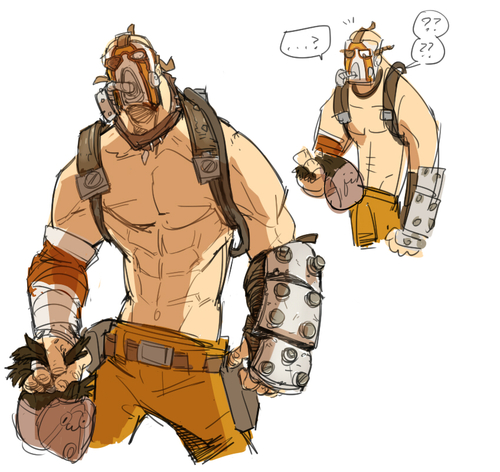 I wasn’t expecting much from him to be honest but I liked his personality profile, his dual personalities, and the fact he had been experimented on.  Like The Joker, The Mad Hatter, Sweeney Todd, he screamed insane but also sounded like he just needed a big bear hug. This is something I like in a character.

At first all I liked about him was his random babbling but then I reached level five and I acquired the Buzz Axe Rampage skill and OHMAHGAHD! Suddenly I was unleashed upon Pandora like never before! Krieg ran into battle like a raging bull, cleaving skulls with his bloodied Buzz Axe, which was satisfying on an unquestionable level.

Krieg’s skins and heads are all awesome and named comically, showing  Krieg’s anger in their names with a constant usage of capital letters (“MY LEFT BOOB SAYS “OBS”!” “I CAN HEAR YOUR BLOOD!” “WHO THREW THAT!!!”) 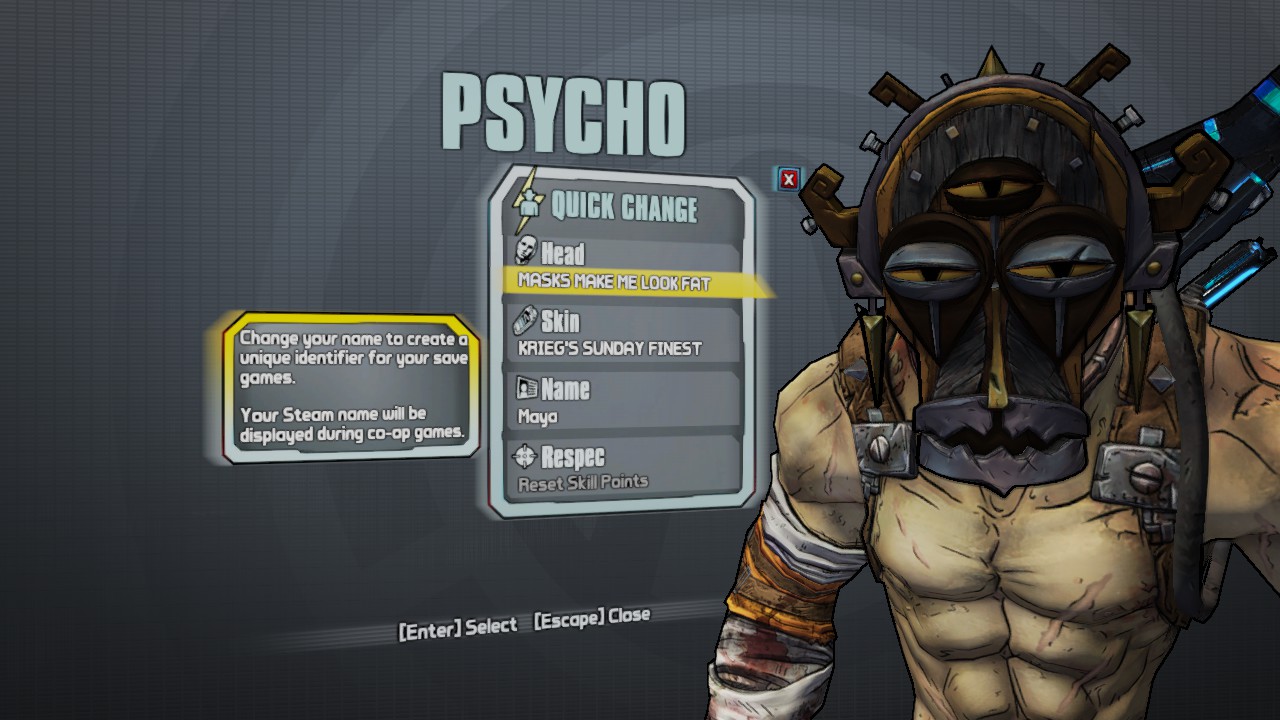 My Krieg is only around level ten. But it has been the best ten levels I have played. He is already a colossal seething mass of muscles and anger and I cannot wait to unlock his skills. I am focusing at the moment on the ‘Mania’ skill tree but may branch off into the ‘Hellborn’ skill tree; which requires a lot of setting myself on fire and every skill ends with “… WHEN YOU ARE ON FIRE!!!!” 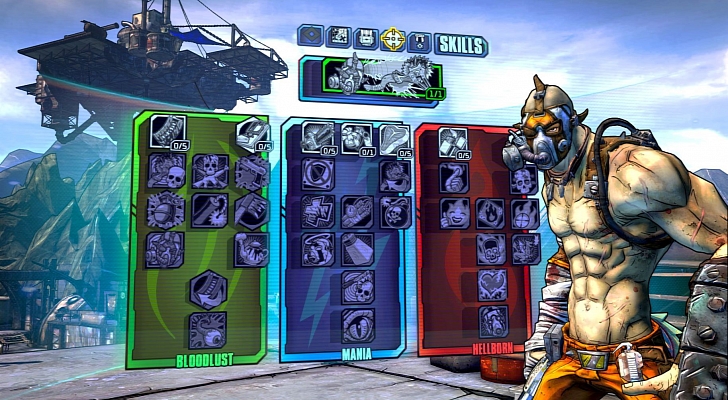 My interest in the ‘Blood Lust’ skill tree was minimal; I don’t really enter into the whole piling tokens up to boost stats thingy-mi-bobbies so I steered clear. I prefer the action skills that I don’t have to faff around with. So after reading each of them all I decided I wanted to be able to transform into a mutant Psycho before anything else! YAY FOR MORE ANGRYS!!!!”  So I am concentrating on this skill tree, it includes boosting my health stats and my melee attacks, which is always a plus!

So… All in all this was basically about how much I am loving my new hunk of flesh; Krieg. I just really want to give him some cuddles before running around with him exploding some bandit heads. He is an absolute blast to play and it’s well worth buying the DLC. 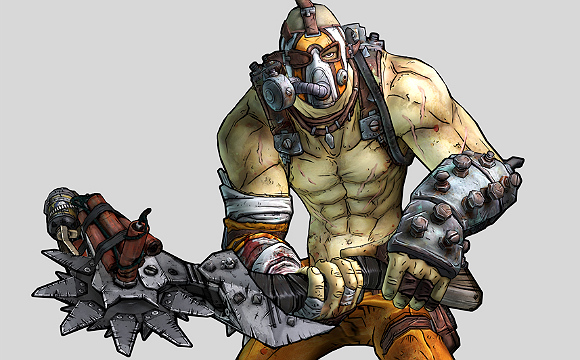