We all want superpowers, from TK to  invisibility if you are reading this then you have probably already decided and are patiently waiting for your moment to become a hero or villain, equality and all that.

My favourite heroes as a whole are probably the X-Men. I long for my X-gene to trigger revealing unto me my powers. Whilst this is considered a fantasy, who’s to say it has not already happened, people can perform great feats and that may well be what real world super powers are.

Take Derren Brown for instance. Now before you start I will say that, yes he states that he has taught himself and anyone could learn to do it. But aha, that is exactly what someone with the gift of telepathy would say. We all know what would happen should powers reveal themselves to the human race. Big fat science experiments, the nasty cut you open, sensory deprivation, pain test, kind of experiments. I mean the ‘man’ refuses to confirm they have aliens, why on earth would they reveal humans with superpowers. We role-players know the scenario, shady government organisations and people disappearing. So yeah I would be a little cautious about announcing I could read people’s minds.

The reason he has got away with it is showman ship, he is intelligent and subtle about the use of his abilities, just enough for us to exclaim “that’s amazing, no way”.  So if Derren Brown is a mutant,  there must be more. For my research I turned to, well mostly the internet, but also my mate Guru Mel, the perfect person to point me in the right direction. 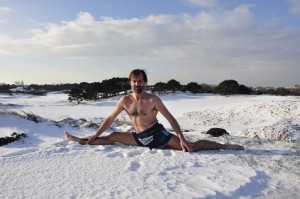 Wim Hof, now 53, found his teenage self, running through the snow barefoot with no unwanted side effects like losing toes to frost bite.  As everyone who is new to their powers would, he began a series of frosty challenges to push his limits. All credit it to him; he holds 18 Guinness World Records including running a marathon above the Arctic Circle in shorts, climbing the highest mountains in the world in only his shorts (although he failed to master Everest but this was due to an injury) and swimming under ice for 66 meters.

As you would expect the scientific community clambered in their snugly mittens and padded jackets to test his claims. Dr Kenneth Kamler, described as practising extreme medicine (which is apparently is medicine in extreme climates, not doing a kidney transplant whilst sky diving), monitored Hof when he immersed himself in ice for 1 hour, 13 minutes. Kamler confirmed the effects of Tummo meditation allowed Hof to control his own body temperature and maintain a normal internal temperature of 37c. Furthermore, in 2008 Hof took part in the “The influence of concentration/meditation on autonomic nervous system activity and the innate immune response” case study where it was proven that Hof could directly influence his Autonomic Nervous System and Immune System using, well what is basically, special yoga.

Immunity to extreme cold is a rather limited power, really only useful if operating your super hero activities out of Russia, Norway may be the Arctic, that’s it! Though I suppose he could be the next Father Christmas, assuming he can also navigate the world and deliver presents in a very short period of time. Want to know more check out his website

Michel Lotito, known as Monsieur Mangetout (Mister Eats-it-all) consumed a whopping 9 tonnes of metal in 25 years.  In his youth he was diagnosed with the condition Pica, a mental disorder in which people compulsively eat non-food items such as Lego and mattresses.  As time went his boring diet of dirt inevitably became quite boring and so he began experimenting with more dangerous items such as nails and glass, learning along the way that his stomach and intestines were double the thickness of the average human, allowing him to consume almost anything.

Realising how entertaining this may be, he began performing from the age of 16 and he became famous for devouring metal, glass, rubber and other such indigestible materials.  It took him about two years to munch down on a Cessna 150. In his lifetime he ate 2 beds, 7 television sets, 6 chandeliers, 18 bicycles, 15 shopping carts, breaking each item down into tiny small pieces and swallowing them down with mineral oil and a lot of water as lubricant. Now I’m not sure who funded his expensive diet because planes don’t come cheap. Guessing a scrap heap is like Costco for this guy. Sadly he died in 2007 but this was not due to any ill effect of consuming everyday objects.

For the next guy I want you to watch this video, you will need no more convincing. Not only is the video presented by the world’s bendiest man but the focus of this video is an Indian man who can conduct high voltage electricity through his body frying an egg in the process. Watch it and be amazed.

The reason that none of these people have succeeded in becoming heroes is because on their own, the powers aren’t all that significant. But just think, if Nick Fury could bring them together as a team…okay so they wouldn’t be the Avengers, but they would be able to attempt smaller feats. May be, just may be these extraordinary people are just the first indications of our evolution into the era of super powered humans. It will not be evident in our lifetime, but rest assured it is where we are heading, your future great great grandchild could be Cyclops, a sulky douche with awesome uncontrollable eye beams!

NB: I have no scientific basis for that statement, so don’t quote me on that.

Editor and occasional writer for Geek Pride! I prefer Star Trek over Star Wars, collect comics and wish I could be a superhero one day. I tabletop RPG as well as a little gaming, design the odd t-shirt now and again, update my Geek Parenting Tumblr and when I have cash to spend (which is rare) I scour the internet for Wonder Woman collectables. Also Doctor Who and Firefly rock!!
You might also like
becpussbreakingDerren Brown