previous
IDW set for all new Rogue Trooper series and re-release of classic story.
random
next
An Open Letter to DC

With the 40th anniversay of Red Sonja coming up Dynamite Entertainment ,currently enjoying massive exposure thanks to the relaunch 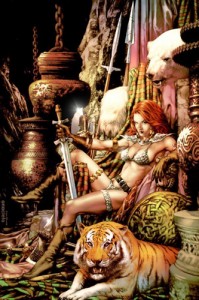 of their most well known title with new writer Gail Simone, have revealed plans for a new mini series Red Sonja: Legends written by a team of female writers.

Gail Simone had this to say,

‘The idea just took off, as some of my artistic heroes, people like Colleen Doran, Amanda Conner, and Nicola Scott all contributed these gorgeous, eye-popping pieces of art for the book. It made everyone tremendously happy and gave us a wonderful extra kick for our relaunch of this classic character. So when Dynamite told me that the 40th anniversary of Red Sonja was coming up, I thought, I wonder if we could do the same thing, but with all my favorite female writers?’

Andy Haigh started writing to counteract the brain atrophying effects of Retail Hell, now it's an addiction. Andy is an unrepentant sequential art absorbist and comics are one of his passions. Other interests include Film, Music, Science Fiction and Horror novels and quality TV like Game of Thrones. He can talk about these at great length if only someone would listen. He lives a somewhat hermit like life in The Shire, spends too much time on social media and is still waiting to go on an adventure.
You might also like
breakingcomicsDynamite Entertainment