A while back, I commented on Twitter that if any game deserves a modern day revamp or reboot, it’d be Road Rash… and a little while after making the comment, I heard that my wish had come true and a studio called DarkSeas Games were working on the project, dubbed Road Redemption. Now I’m not saying I had anything to do with that, but… you’re welcome. 😉

Anyway, it seems the project in question hit Kickstarter last month, and as of this morning has hit it’s $160,000 target with 48 hours to spare! This means we’ll once again be able to mash our friend’s heads in with pipes and chains while riding at 120mph on PC, Mac, Linux, and Wii U in August 2014.

The “spiritual successor” to Road Rash even has the blessing of co-creator Dan Geisler, who said “I want to play that! Get funded and kick ass!” 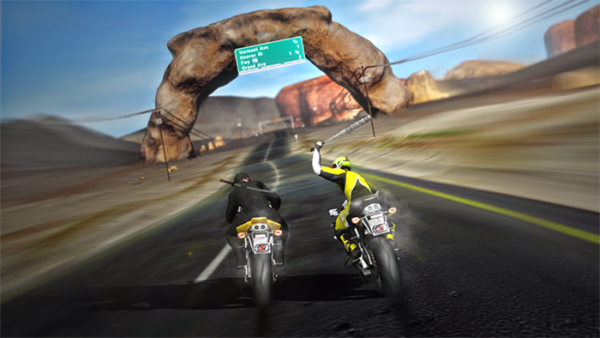 So if you want to get in on the ground floor and bag yourself a DRM-free version of the game, you need to get onto the game’s Kickstarter page and pledge $15 or more within the next 2 days.

Should the project hit it’s stretch goal, DarkSeas are looking to develop an XBLA version, and incorporate Oculus Rift support into the game, and judging by the tech demo they’ve shown that’d be amazing!

Movie and videogame geek, basketball player, guitarist, waffle connoisseur & expert in being a slacking bastard. You'll find me gaming on PS4 as "SpasmicPuppy" most of the time... I'm addicted to Destiny.
You might also like
breakinggamekickstarter