previous
Being a Geek
random
next
Angry Lovebirds

So I’m writing this in retrospect. I made this costume for Halloween 2011 but it seems like too good an opportunity to miss now I’m writing these tutorials, so I thought I would bring it back to life one last time.

Watchmen was a big deal for me. I’m a huge fan of the graphic novel, so when I heard that they were adapting it for screen I went a little crazy. If someone checked my browser history for the amount of times I watched the Watchmen trailer over the months leading up to the films release they would probably think I was a little nuts. I imagine it’s because of this that when I saw their concept of the Silk Spectre I was a little bit dubious to say the least. The outfit was all wrong, dammit! 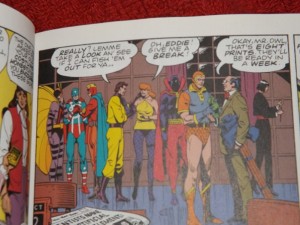 Anyway, the movie finally came out and all was forgiven. Carla Gugino gave an excellent performance and I don’t think I’m the only person in the cinema that day who damn near bit right through their lips at ‘that’ scene. But enough of my babble, lets get down to it. 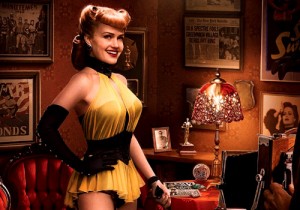 The movie-style costume is fairly basic, and there are plenty of ready made ‘off the peg’ versions out there which would do the trick just as easily, but they are slightly innacurate and I like to think of myself as a bit of a purist, so out came the sewing machine.

Admittedly, the hardest part of this outfit was finding the right fabric. The colour had to be just right, as did the texture. Sadly I couldn’t splash out like I wanted to on the finest silk, but I managed to find a pretty decent match down at the local haberdashery. 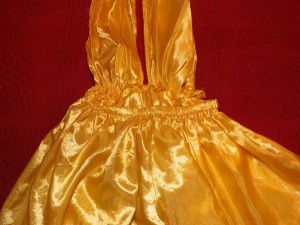 Next came the sewing. I didn’t make a pattern for this as it turned out to be much easier to play it by ear. It definitely helped that I had Mama Fairfield on hand for the tricky measuring parts; if you’re going to try this one I wouldn’t recommend going it alone. We made the dress in 3 parts; the first two parts are sewn onto the black choker, which was quite easy to get hold of online. Make sure you get one which can be taken off easily otherwise you’ll end up stuck in your dress, as this is pretty much all that will be holding it up! The fabric itself was cut into rectangles and ruffled under the choker so that the bottom part could be pulled out and round my waist. We put the stiches under the collar so that it’s all hidden when you’re actually wearing the dress. 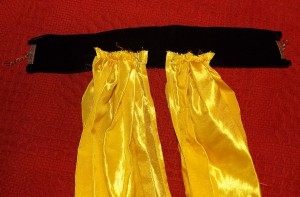 The skirt was made with one long piece of fabric, cut shorter at the front in the style she wears it. We used an elasticated waist-line as it would be hidden under the belt so it didn’t matter too much that it bundled up in the middle, and it actually added to the effect. This was a simple case of stitching together the two ends, trimming the fabric to the right length by using pins to hold the shape in place then sewing it up along the pins (making sure that the seam was at the side before doing so), and adding a seam on the top and the bottom to neaten it up, the top seam was left slightly open so the elastic could be pulled through (Protip: put a safety pin through the end of the elastic whilst pulling it through the fabric and it’ll go much smoother). Once this was done we stiched the two top pieces of fabric to the skirt to create a dress. 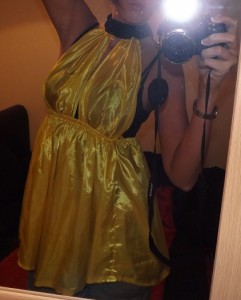 Now, even excusing the horrendous selfie this is clearly not a flattering look, which is where all the additional costuming comes into play. Sally wears something underneath her costume which would not look out of place on the Rocky Horror Picture Show. 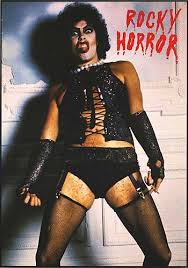 But y’know… Much MUCH sexier of course.

I don’t think I need to go into much detail here, most of these items can be picked up on the high street so here’s the shortlist: stockings, suspenders, burlesque knickers (the big ruffled type), a black basque or corset, big belt (I eventually found the right belt on Ebay, but it wasn’t easy), some sexy boots and some big earrings. I had to compromise on the boots and go for some 50’s style kitten heels instead, I just couldn’t find the right style in my size.

She also has a riding crop in the promo photos, but I didn’t notice her using it during the film so you could be forgiven for skipping that part. Curiously she only wears one glove, so I bought a pair of long-sleeved gloves and saved the other for a rainy day/another costume some day. I found little pearl buttons on Ebay and hand stiched them on to resemble her glove in the promo shots.

For me, not being terribly girly or talented in such things, hair was a bit of a drawback. I spent months practising the ‘do. Youtube was my friend in those early days, and a clip that might be particularly useful can be found here:


Though I must warn you, the girl can talk! Skip to the second hairstyle for the one based on Sally Jupiter. If you can’t find a hair rat for sale then I’d recommend buying a ‘hair donut’ from Claires Accessories and cutting it to create a tube, make sure you sew the ends though or it’ll unravel.

The make-up is typical pinup style, bold red lips, dark black eyebrows and lots of liquid eyeliner. Here’s a good tutorial to help you get this style:


You’ll note that he adds a beauty spot onto the left eye, switch it over to the right eye and we’re bob on.

So here it is, the final product worn at Manchester Comiccon last year. Did I mention I have some very attractive friends? Well, now you know. 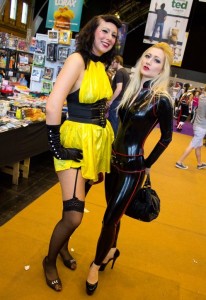