previous
Let me tell you about the ending...
random
next
John Constantine Hellblazer Farewell

Shipping: Most of it I just don’t understand

It was about a year or so ago that I joined Tumblr, a decision taken when I decided to share my enthusiasm for geek parenting with the internets. It was about 8 months ago that I totally fell for Supernatural. My husband and I had tried to watch season one a couple of years ago but didn’t finish. Then two people whose opinions I have the utmost respect for insisted that we should stick with, it so we did and BAM! I am a totally Supernatural fangirl! So I did what fangirls do and I turned to the unending source of fandom – the internet.

I started with Tumblr and boy was I quickly confused. I discovered something I find quite disturbing and really don’t understand; I had encountered the hardcore world of shipping.

For those who don’t know, the Urban Dictionary definition:

[quote]A term used to describe fan fictions that take previously created characters and put them as a pair. It usually refers to romantic relationships, but it can refer platonic ones as well. (Just think of “shipping” as short for “relationSHIP”.)[/quote]

The discovery for me started with one word Destiel. Was this a character I had missed? I was only two or three seasons in, maybe it was a spoiler, do Dean and Castiel really merge? Feel free to mock me for my naivety, though I use the internet everyday there are still many things I have to google, like the pronunciation of meme. But then, hey, that is okay because not everyone can know everything.  Naturally curious, I searched the Destiel tag, what I found somewhat confused me, and occasionally horrified me. Destiel it turns out is the name shippers give to the non-canon romantic relationship between Dean Winchester and Castiel. 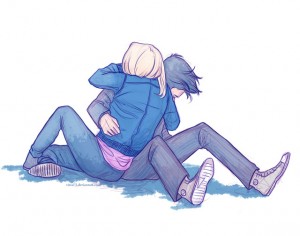 My first thought was “What romantic relationship?” and this is one of my problems with some examples of shipping. I realised that I ship. Mine is Rose and the 10th Doctor. From their first meeting I truly believed they were the perfect soul mates for each other; I spent a lot of their time together crying, tears of joy and sadness. I’m not stupid, I knew that this would never end exactly the way I wanted, and yes I am still a little unsatisfied that she ended up with the clone. Their romantic relationship was heavily implied by the writing and acting throughout the two seasons they spent together, so it is not a massive leap and completely believable to say they were mutually and romantically in love.

Dean Winchester is a pie eating slut, he has bedded more than his share of women and even fell in love with one. He is heterosexual and the writers have made that clear. As for Castiel, well we have seen him sexually aroused by pizza delivery man themed heterosexual porn and have proper hard snog with a female demon,  so I suspect he is sexually attracted to woman. But as a celestial being I would completely believe he is beyond humanity’s petty categories for love. Spoiler: you remember that time he became God and took it upon himself to smite all the gay haters in a church, so he is definitely a supporter of gay rights, though hasn’t displayed any leaning towards being gay.

Castiel raised Dean from perdition and has become his protector, friend and occasional enemy. He has not fallen romantically in love with Dean, not once have they nearly kissed or declared feelings of any other definition than brotherhood.  So to force a sexual relationship on them, to me, feels very wrong. The writers have created these characters as we see them; we learn who they are through their actions. Taking a few lines out of context to make a gif  is not evidence of romantic love.

Please don’t start assuming I am a homophobic, I believe we can love any adult we want. I was fully up for the sweet lovable Ianto and Captain Jack Harkness because the writers allowed me to see the developing relationship and I was saddened when Jack lost Ianto. And I think this is my point- the writers wanted the characters to fall in love and so for the most part I believed and respected it, even if it was a bad idea and not going to end well. That is to say I don’t always agree with the writers, I could never quite believe that Willow and her werewolf were meant to be, but when she met Tara I was happy with that pairing which is why when it ended the way it did I cried like a baby. So should the writers of Supernatural decide that Dean and Castiel are to fall in love and become romantic, then as long as they write it well, and by that I mean not just elbowing it in to please fans, then I will support their relationship all the way. I want my shipping to have already be hinted as and thus not completely out of character.

Which brings me to the second reason shipping disturbs me, the escalation to slashing. It is every person’s right to choose their sexual partners, I strongly believe this and will defend and support gay and bisexual rights. I think back to my teenage years, I’m afraid to admit but I was a huge Take That fan. I loved Mark Owen and Robbie going so far as too invite them to my house for tea (they never came) but I did not want them to fall in love with each other and I never ever wanted to see them having sex. A: because they are not gay and neither am I and B: As I teenage girl, I wanted them to fall for me. I do understand that a gay male may fantasise about male characters having same sex relationships, but I am confused as to why so many of the disturbing images of Dean and Cas, Sherlock and Watson, Tony and Steve etc. seem to be created by heterosexual teen girls. Honestly if I am missing something please feel free to comment below.

I am led to believe there has also been a campaign by these shippers/slashers to have their fantasies become canon for Supernatural, and I think my good friend’s response to this sums up how I feel: “Hell they are welcome to enjoy whatever the fuck they like in their own heads…and fan fiction and Photoshop or whatever…but suggesting that the show should change to accommodate it just enrages me”  Quite right too, I believe it to be disrespectful to the fandom and show.

I am true romantic who strives for happily ever after.  I accept people’s rights to be creative and respect the various fandoms of which I am a member, but shipping and slashing established characters into unfeasible relationships is something I want no part of. Many writers/producers of the TV shows I love can frustrate and anger me but I respect they are the people who decide the lives of the characters they create. I don’t want their canon changing to please the needs of a few fans.

My conclusion, some shipping I understand, some of the more extreme horrifies and offends me, but, like many other disturbing things on the internet, I know I can avoid it. My research into shipping has made me realise I am a dedicated follower of my fandom’s canon and like to stay true to the characters, to force them into a relationship that is out of character,  to do so is to change the person you loved, so what’s the point? Editor and occasional writer for Geek Pride! I prefer Star Trek over Star Wars, collect comics and wish I could be a superhero one day. I tabletop RPG as well as a little gaming, design the odd t-shirt now and again, update my Geek Parenting Tumblr and when I have cash to spend (which is rare) I scour the internet for Wonder Woman collectables. Also Doctor Who and Firefly rock!!
You might also like
becpussbreakingslasher