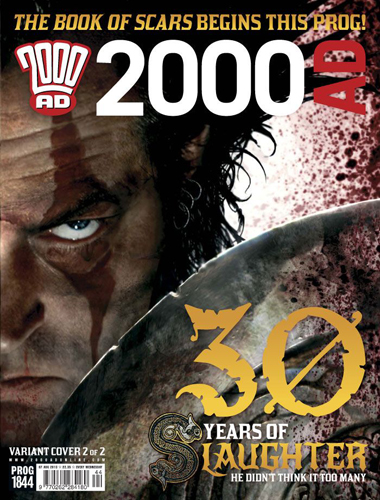 A new Slaine story celebrating the character’s 30th anniversary titled ‘The Book of Scars’ starting in 2000AD Prog 1844 has writer and creator Pat Mills teaming up with some of the characters classic artists including Simon Bisley and Glen Fabry.

Slaine, a fantasy based on Celtic and Irish myth and legend with other influences (Robert E Howard’s Conan being a major one) first appeared in 2000AD in the early 80’s. Recently the character has been synonymous with the eye popping digital art of Clint Langley however it was ‘The Horned God’ story originally published in the late 80’s with stunning fully painted art from Bisley that first ensured the character would join the ranks of 2000AD’s best loved classic characters.

You can get the digital edition at 2000AD’s site here

Andy Haigh started writing to counteract the brain atrophying effects of Retail Hell, now it's an addiction. Andy is an unrepentant sequential art absorbist and comics are one of his passions. Other interests include Film, Music, Science Fiction and Horror novels and quality TV like Game of Thrones. He can talk about these at great length if only someone would listen. He lives a somewhat hermit like life in The Shire, spends too much time on social media and is still waiting to go on an adventure.
You might also like
2000ADBook of ScarsClint Langley