This morning, fanboys and fangirls throughout San Diego Comic-Con had their pants explode this morning when this image was shown on the screen as writer/director Zack Snyder came onstage. 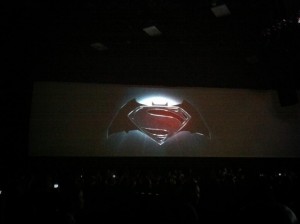 Zack (the legend behind the “Dawn of the Dead” remake, “300”, “Watchmen” and the latest Superman film, “Man of Steel”) said that he was working with writing legend David S. Goyer (“The Dark Knight”, “Call of Duty:  Black Ops”, “Man of Steel”) to bring together Batman and Superman, but it won’t be like anything we’ve seen before.

This is actually the second time these two legends have worked together, considering that Goyer and Nolan wrote “Man of Steel” and Snyder directed it, but it will be Snyder’s first time writing with him. When someone asked whether it would be a collaboration or a fight between the two heroes, Snyder pulled an interesting trick out of his sleeve. He pulled actor Harry Lennix, who played General Swanswick in “Man of Steel”, to read the following bit of dialogue:

If that rings a bell, then odds are that you remember this scene:

Batman/Superman fight, fast forward to 2:02 for the juicy bit.

Following that, Snyder said it wouldn’t be an adaptation of “The Dark Knight Returns”, but it would be inspired by the book. At that point, the fans in the audience lost their ever-loving minds.

AND NOW FOR THE GUESSWORK:

Given Christian Bale’s recent statements, it’s safe to guess that WB is either going to have Joseph Gordon-Levitt as our beloved Dark Knight. When you consider how much he abhorred killing in Nolan’s version of the Bat, and how much death Superman caused in “Man of Steel” (directly and indirectly), my guess is that Batman refuses to see Superman as a hero. Heroes don’t kill, villains do. Killing doesn’t make them any better than the men they killed, regardless of intent. My guess is that we’ll see Batman look for Superman’s weaknesses, utilize them, and put him behind bars, only for Superman to whoop his ass in the process, with the two of them arguing back and forth about the merit of killing (or lack thereof, in Bats’ case).

However, this could also serve another purpose. Goyer’s no stranger to political commentary, and recent years in politics have shown humans to be more divided than ever (if you doubt me, go to CNN), and considering the iconic nature of these two heroes and their symbolism as Americans, it wouldn’t be much of a stretch to use them as representatives of the conflict beweeen liberals (Batman) and conservatives (Superman). While Batman was no stranger to collateral damage (see “The Dark Knight”), he did everything he could to minimize it, while Superman showed no hesitation, seeing it as an unfortunate consequence of conflict. More importantly (SPOILERS IN 3……2……1……GO) Superman KILLED Zod. He didn’t throw him into an undetermined hole, he straight-up snaps the dude’s neck in a fit of uncontrollable rage! Batman went out of his way to AVOID killing people, no matter who died at the criminals hands.

For this argument, I return to TDK. In this one, we see the Joker kill the love of Bruce’s life with a bomb. He had the Joker’s life in his hands later on, and he had two options: get his revenge and drop the bastard, or take the high road and let him live. He chose the latter, saying that killing wouldn’t make him any better. VIOLENCE can solve problems, but KILLING doesn’t. If you watched your parents bleed out on a dirty alleyway, you’d probably feel the same way. He controlled himself when he could have lost it, unlike his younger extra-terrestrial adversary. This is a very liberal attitude towards life, while Superman was rather conservative about it, demonstrating that threatening and taking the lives of innocents is the same thing as forfeiting your life. Zod killed hundreds, causing a fight where Superman killed hundreds more in the collateral damage, but it was Zod who started it, and Zod who would continue unless stopped by any means necessary- including death. Clark may feel terrible about it, haunted even (as he was in the comics), but there’s no way for Bruce to know that. This could cause the BVS film to climax on a monologue where Superman rants about his regret and the necessity for it, the personal cost of a violent life, and the horrors of war, making them both realize that fighting won’t solve anything, but working together will solve everything. 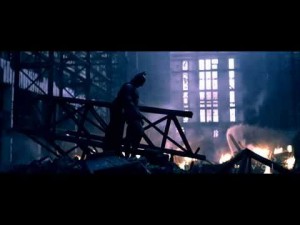 A turning point, beginning act 3 of “The Dark Knight”.

An aspiring filmmaker coming from a military family, my solitary life allowed me to gain an intimate knowledge of geekdom. I specialize on horror and military, but I am also knowledgeable on science fiction, fantasy, comic books and classic cartoons.
You might also like
Batmanbreakingcomics