previous
A PG13 At The Mountains of Madness
random
next
Think You'd Survive A Zombie Apolcalypse? Now's Your Chance To Prove It

Sons of Anarchy Teaser For Season 7 Unveiled. And It’s Awesome.

Rev up those motorcycles, folks, because at last we have a teaser for Season 7 of Sons of Anarchy!   Granted it’s only 20 seconds long but boy does it leave you wanting more.  Entitled “Hell Awaits”, the teaser shows Jax riding solo in the black of night.  As his face switches to a skull we’re left wondering if he’s the Reaper or if he dies.  Maybe both?

Big fans of the series will know that SOA creator Kurt Sutter is very open about being inspired by Shakespeare’s Hamlet, so the skull imagery is especially poetic.  Given the way Season 6 ended (I’m resisting the urge to post spoilers but seriously, you should know by now that there was a spectacularly gruesome murder) and the imagery in this teaser, there’s no doubt that Season 7 is going to be a bloody one.  No cast member is safe.  Although from the looks of them in the picture below, they don’t seem too worried. 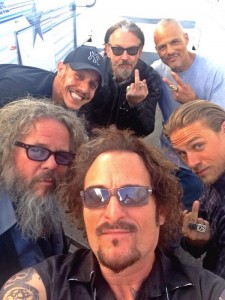 When asked how Season 7 compared to Game of Thrones’ now infamous “Red Wedding” scene in which pretty much everyone dies, Sutter informed us that Season 7 would make that look like a bedwetting scene.  Oh my.  Looks like we’re in for a rough ride.

I'm Lauren, also known as The Rock Fairy. I'm a music journalist and radio DJ mainly but I felt the need to get my inner geek on. I love all things Marvel, Batman and a whole host of other geekery which you'll find out from the stuff I write about. I can't give too much away can I?
You might also like
Game of thronesnews