A clever game marred by being too random for a game which appears to have a strategic bent.

If you dropped the wizards from Terry Pratchet’s Unseen University into Russell Crowe’s Gladiator then threw in a Dungeons and Dragons inspired menagerie of monsters, the game you’d be left with is Cheaty Mage.

Players take the part of wizards looking to score big by betting on the outcome of fights amongst fantasy creatures, including goblins, elves and demons. At the beginning of each round,  5 Fighter cards are laid out on the table in such a way that allows them to be numbered from one to five. Each wizard has a hand of betting slips ranging from one to five: the wizard selects one, two or three of these betting slips secretly depending on which Fighter(s) they believe will win this round (more on how this is determined later). This clever system means the other players in theory won’t know who you will be aiding in the coming round of play. 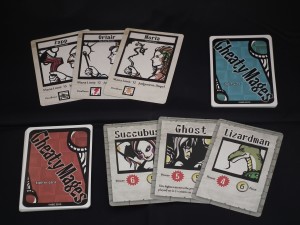 A selection of Judges and Fighters

Each Fighter card features two numbers. The first is the Power of the Fighter; the higher the Power the more likely the Fighter is to win the round. The second number is the prize money if that Fighter wins.

If the game was a straightforward “Biggest Guy Wins”, it would be pretty dull, so to liven things up each player has a handful of spells they can toss into the Arena to either aid or hinder the creatures duking it out within. Each players takes it in turn to play one card next to one Fighter; this continues until all players say ‘pass’, at which point the round is over.

So once all players have passed, the cards next to each Fighter are flipped and the total Power of the Fighter is calculated; the highest total wins! Any wizard that bet on the winner then receives winnings based on how many betting slips they used. If they bet on one Fighter, they get double the prize money printed on that Fighter. If they bet on two, they get the value on the Fighter card straight up, and if they bet on three they get the prize money halved. This adds a wonderful tactical edge to Cheaty Mages. Do you spread your bets and reduce your risk, but take a smaller prize at the end, or do you go all or nothing and risk it all on that Orc in the middle? 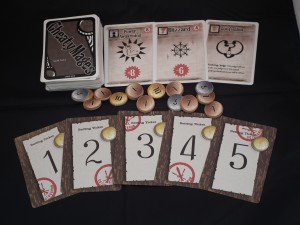 Spells come in three flavours. Direct spells are those that can be seen by all the players, and therefore get played face up next to the target; these generally have the effect of either increasing or decreasing the Power of the creature. Enchant spells are sneaky little incantations that no other players can see you cast, so these are placed facedown next to the target. These again will typically affect the Fighter’s Power. The last type are Support spells. These tend to have unusual effects, such as removing a spell from the target or forcing another player to discard a card.

At first I thought the use of known and unknown cards was a great way of building tension, that suspenseful ‘what if’ moment at the end of the round where each Fighter’s Power is calculated. After several play-throughs however I started to find this rather unbalanced. Enchants become far more powerful than Directs, as you don’t necessarily reveal you favoured creatures when using them; Support spells on the other hand are like lighting up a neon sign exclaiming ‘This is the one I want to win/lose this round’. Secret information is always far more useful than revealed information, and the fact that the spells are randomly drawn from a deck means that a guy with a handful of Enchants is going to have the drop on all the other players.

Another element I found unpalatable was the nature of the Support spells. Several of them had the ‘gotcha’ element about them; you don’t know which player is holding them, you don’t know which creatures other players have bet on, and then suddenly you’re a card down from everybody else as you’re forced to discard a spell, and the massive Direct spell you chucked on the Goblin to win the round has been dispelled, leaving you feeling cheated (pun not intended!). 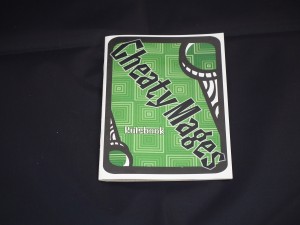 Even the rulebook uses the same artwork as the card backs. It gets a bit samey…

To add a final wrinkle to proceedings, each round is also presided over by a Judge. The Judge changes each round, and will have a variety of effects. Firstly, most Judges have a Mana limit. Each spell cast will have a Mana cost; if the cumulative Mana cost of all spells played against an individual creature exceed this Mana limit, the offender could have all its spells removed from play, or worse still, be ejected from the Arena altogether! Secondly, the Judge may limit the types of spell that can be played in a round, preventing Supports being used for example, or any spells marked as Forbidden. The Judges have a heavy influence on gameplay, as they open up a set of new options for the players. Playing massive spells with huge Mana costs can lead to creatures being ejected from the Arena if the Judge has a particularly low Mana limit, so even if it looks like you’re helping a particular creature out, you may in fact be simply trying to get the Judge’s attention and getting that creature ejected at the end of the round.

After three rounds of play, each with new sets of creature cards and a new Judge, the player with highest winnings at the end is the winner of the game. Since each round is fairly short, the game itself doesn’t take long. The simple set up and basic rule set also lend CM to the gateway game genre, making it ideal for introducing new players or as a filler between bigger games.

Now I have to be honest here. The first time I played CM, I enjoyed the idea of surreptitious mages waggling their fingers and casting spells without their fellow magic users figuring out what they were doing. But as I got into my second and third play throughs, a couple of elements started to niggle.

The disproportionate power level between Direct and Enchant spells meant the lucky hand was often the winning hand.

Another issue was with the scoring. If you’re unfortunate to have missed out on prize money on the first or second round, you’re really going to struggle in the third as your only option is going to be a single bet on one creature to try and win big. Astute players will realise that, and spread their betting to make sure they try and also bet on the same creature. This leads to a situation where even if you bet correctly, your opponents are also going to be getting prize money, keeping them in front. I don’t like it when a game leaves last place with little hope of winning when you’re only two thirds of the way through.

Finally the three round structure just didn’t add enough variety for me. Sure the Fighters and the Judge change, but I found the Judges a bit of a much of a muchness; whether they dispelled or ejected, the affected Fighter was very unlikely to win. 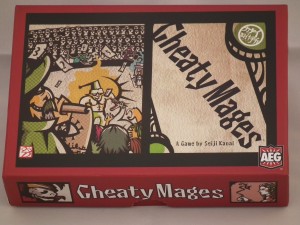 The box art is basic, but this kinda works in its favour

The artwork and feel of the game are both good. The bold lines and colours of the cards make the game look clean and well-presented, and the card stock is fairly robust so it’s not going to fall apart in minutes.

For me Cheaty Mages is one of those rare games where more play throughs actually lowers my enjoyment of the game as the strategies reveal themselves. Don’t get me wrong, the game is still pretty clever and has enough gameplay for a quick first game of the evening. Just don’t have too many players (3-4 is the sweet spot, any more and the turns become tedious and the effect of Judges far more difficult to play around) and be prepared to sit through the last third of the game with no hope of winning.

An avid board and card gamer, this displaced Cornishman has spent way too much time playing games and skulking around his local hobby shops. He later escaped to Swindon, the land of roundabouts, where he currently designs games whilst infecting those who stand still too long with his gaming lurgy.
More Goodness
Card GameMagewizards