Simple, inclusive and suited to multiple playthroughs, a great game for any collection.

Now you may not know this about me but I’m a bit of a table top gaming fan. I read magasines and blogs, listen to podcasts and even watch videos of people playing board, card and miniatures games. In recent months there’s been one title I’ve heard over and over again across all this media: Codenames. This party word game has been making a massive splash in the hobby gaming world, nominated numerous times for must-buy and convention bests by many industry moguls. So of course, I had to check what the fuss was all about and let you geeks know what I found out!

The aim of Codenames is to guess where all your team’s spys are whilst avoiding your opponent’s, or accidentally picking civilians (which end your turn) or the Assassin (which causes an instant loss). Mechanics wise, Codenames is incredibly straightforward. The game has a huge stack of cards with single words on them, and the players assemble 25 of these into a five by five grid; these represent spies in the field who are only known by the players by their ‘codenames’. One member of each team is then nominated as a Spymaster and given a Key which tells the players which of each of the words in the grid are blue spys, red spys, civilians or the dreaded assassin. 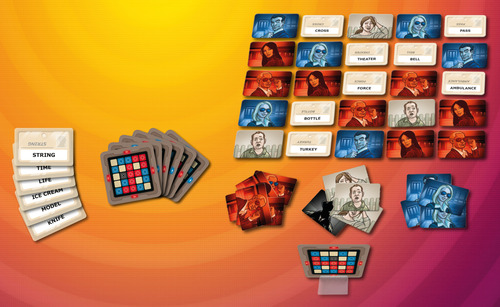 The rest of each team (blue and red) then become the ‘field operatives’. Each turn, the active team’s spymaster gives a single word clue, followed by a number. That team’s field operatives then guess which words they think best match the clue, up to the number the spymaster gave. For example, if the spymaster said “Trees:2”’ the field operatives may pick ‘Nut’ and ‘Bark’ from the gris of words on the table. If they get them right, the spymaster will cover the guessed words with their team’s coloured chits. The winner is the first team to find all their spies.

Simples! Well, not quite. The meat of the game is covered in the first half of the rulebook; the rest of the booklet is devoted to what is considered a ‘valid clue’. I adore the simple mechanics of Codenames; which can be picked up in minutes. However this over-explanation of the validity of a clue just feels a little clunky, especially if you have rules lawyers at the table who’ll be keeping tabs. It’s a minor gripe, and to be perfectly honest it didn’t come up past the second playthrough, but something to bear in mind.

Other than this little hiccup, Codenames feels like a wonderfully oiled and polished engine. Once the intricacies of clue validity is sorted, Codenames just runs with the solid efficiency of any great party game. Players are constantly engaged, both by the deductive reasoning needed to suss out your spymaster’s clues and by making sure your opponent’s haven’t given too much information away. Whilst the theme is lightly applied, the word-based party game angle makes Codenames perfect for hard core gamers, mixed level game nights and even the annual Christmas post-dinner game afternoon with the family. 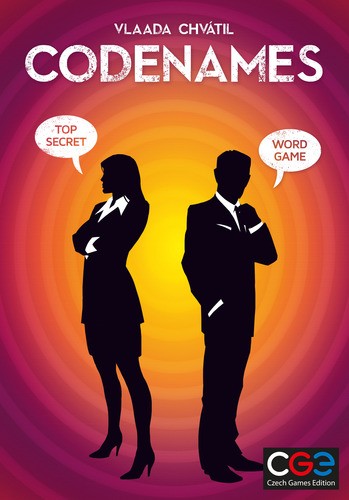 This game isn’t the prettiest to look at…

Something we did encounter was a touch of analysis paralysis, especially in the early turns. Whilst it would be safe to give single guess clues, this is a first class ticket to Loserville. However, in the pursuit of those multi-guess clues the spymasters may become overwhelmed by the need to make sure their field operatives don’t pick the wrong words, amongst the hundreds of different connections and connotations in the spy-word grid. Its not ‘really’ an issue as it comes down to the creativity of the spymasters and how well they know the other members of their team, plus Codenames comes with a sand timer which can be flipped by ANY player if they believe someone is taking too long to give a clue or make a guess.

The components are of a decent card stock, meaning they’ll take the shuffle battering the game will receive due to it’s replayability. There’s hundreds of double sided codename cards and keys, so no two games will ever be the same. The artwork is….OK. I know, I know, lazy writing but that’s all I can really say about it. It’s function and gets the theme of the game across, but it won’t blow you away.

Does this game live up to the hype? For me it’s a resounding YES! Codenames has a simple, easy to grasp ruleset and an inclusivity that makes it suitable for all levels of gamer. It’s also one of those rare games that despite having a short, filler-length playtimes, it can be played repeatedly in the same night without diminishing returns, especially if you change the spymasters each game. With it’s decent build quality, cheap price and endless combinations, Codenames is a perfect game for any collection.