Directed by James Cameron, Aliens is a cinematic experience like no other.  Building upon the original, Aliens expanded the universe and setting to create a war movie in space that stayed true to its horror origins.  Whilst many boardgames have replicated the feel of Aliens, there has only been one official boardgame adaptation, and that was released over thirty years ago.

One of the reasons that Aliens is such a classic film are the iconic moments, such as the multi-layered mess hall scene and the nerve-wracking sentry gun sequence.  From the retro-futuristic hardware to the memorable characters, all come together to create a film like no other.

It was therefore understandable that “Let’s rock!” was pretty much the universal reaction when Battlefront announced they were developing Aliens: Another Glorious Day in the Corps.  Best known for developing the World War 2 miniatures game Flames of War, Battlefront brought their twenty years’ worth of experience to create the ultimate Aliens experience.

With ‘Aliens: Another Glorious Day in the Corps’ due to be released later this year, Geek Pride took the opportunity to interviewer the game’s developer Phil Yates.

How did Battlefront become involved in developing Aliens: Another Glorious Day in the Corps?

Aliens has been one of the favourite movies of the boss, since it came out. When the opportunity to do a licensed game for it came up, there was never any doubt that we would do it. As you can imagine, that decision was greeted with cheers from most of the studio.

Aliens has a very specific mood and theme, how have you translated that into the game?

We didn’t really think about it in terms like that, rather we just tried to bring in the feeling of the film itself, a feeling of growing menace, then of being overwhelmed and a desperate struggle, and finally just sheer survival. There are two aspects to that; the first is game play and the second is the campaign.

In each game, you start in a fairly good position. And then the aliens start coming and the ammo starts dropping and marines start dying. By the end of the game, you’re really struggling and just happy to get out of it mostly intact.

The campaign follows the same sort of arc. Whereas in many campaigns characters get better as time passes, such as learning new skills, the arc in Aliens is downward. Your resources slowly run out as the alien threat ramps up. By the end, you are down to just a few characters, barely enough ammo, and even more problems. Just surviving is a victory worthy of a major celebration.

For those wanting a more optimistic arc, the expansions add the option of experience cards, allowing your marines to grow tougher as the fighting progresses. For those who just want a good old bug hunt, there are a bunch of challenging scenarios where the goal is simply to wipe out all of the aliens!

What have been the challenges in adapting such an iconic film and how did you overcome them?

As you suggested, one of the biggest challenges was staying true to the feel of the movie in game play, and the same challenge applied to the miniatures as well. Getting the characters right is a big challenge for any sculptor, considering the faces, poses, and equipment. Likewise, creating aliens that reflect the feeling of a film where they are mostly a hidden threat that flashes onto the screen in their full terrifying glory was an interesting challenge. Even the design and artwork of the gameboards took careful crafting to combine interesting gameplay and the feel of the film. 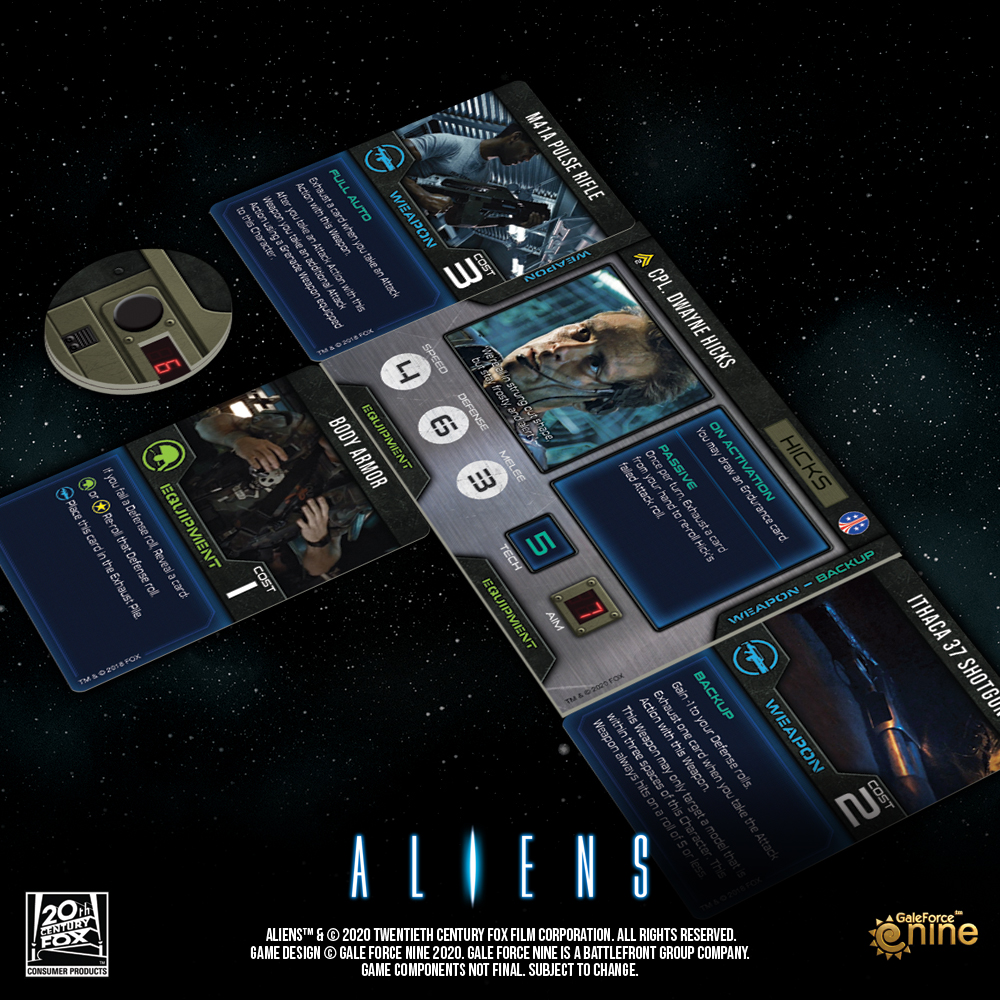 Will you be incorporating elements from the Director’s Cut and other sources, such as the Colonial Marines Technical Manual, or are you focussing only on the original release?

Definitely the wider story. We have sentry guns in one of the campaign games and several of the bug hunt scenarios, for instance. Likewise, you can drive the APC [Armoured Personnel Carrier], firing its weapons as you go. We tried to give the richest Aliens experience we could.

One of the most memorable aspects in Aliens are the motion trackers, how did you bring them into the game?

The motion trackers are the core mechanism in the game. Until your characters can actually see them, the aliens are just blips. You know that there’s something there. The big question is exactly how many somethings. As the game progresses, each player draws motion tracker cards adding more blips to the game board. These might appear in the expected place, or suddenly burst out of the ceiling or an unexpected maintenance tunnel. You can predict the sort of threat you’ll face, but when it actually comes, it’s never quite what you expect.

The motion tracker also features in the first campaign game where you are trying to find Newt. One of those blips is the one you’re looking for. Simple enough. The problem is that the rest definitely aren’t!

Are xenomorphs the sole enemy in the game, or will other antagonists be involved?

The game follows the story of the movie, with the expansions filling in more gaps. Since the only opposition was the aliens, that’s what the game is about. However, the alien queen expansion definitely makes those aliens a lot more scary – especially if one of the players takes on the role of the hive mind, adding intelligence to their blind instinct. One might consider Burke as an antagonist as well, although he’s on the player’s side.

What characters are available in the game and can players create their own marines?

All of the main characters from Aliens are in the game and the expansions, including Bishop, the synthetic ‘artificial person’ who has some quite unique characteristics. Since the game focuses on the movie, there is no system for creating your own custom marines, although the experience cards mentioned earlier do allow you to adapt them to your taste. This really isn’t a problem: with each character having a different style of gameplay, there’s plenty of options to choose from.

How will campaign rules differ to standalone play?

The campaign is a series of missions that you must complete. Unlike standalone games, some of the resources you use in one mission are no longer available for future missions. That means that you need to keep everyone alive and out of the clutches of the aliens, or undertake rescue missions to get them back, and rather than just getting one or two characters out alive to claim victory.

It’s pretty cool in that you can play the whole movie. You can even watch bits and then play the matching mission, then watch some more and play another mission!

What expansions do you have planned for the game?

There are two expansions: Ultimate Badasses, which adds additional characters and experience cards, and Get Away From Her, You B***h, which extends the story and adds the alien queen, power loader, APC, more game boards, and the ability to play as the hive mind.

Phil Yates, thank you very much.

Aliens: Another Glorious Day in the Corps will be released in October 2020 and can be ordered in advance through your friendly local gaming store or through most online retailers. 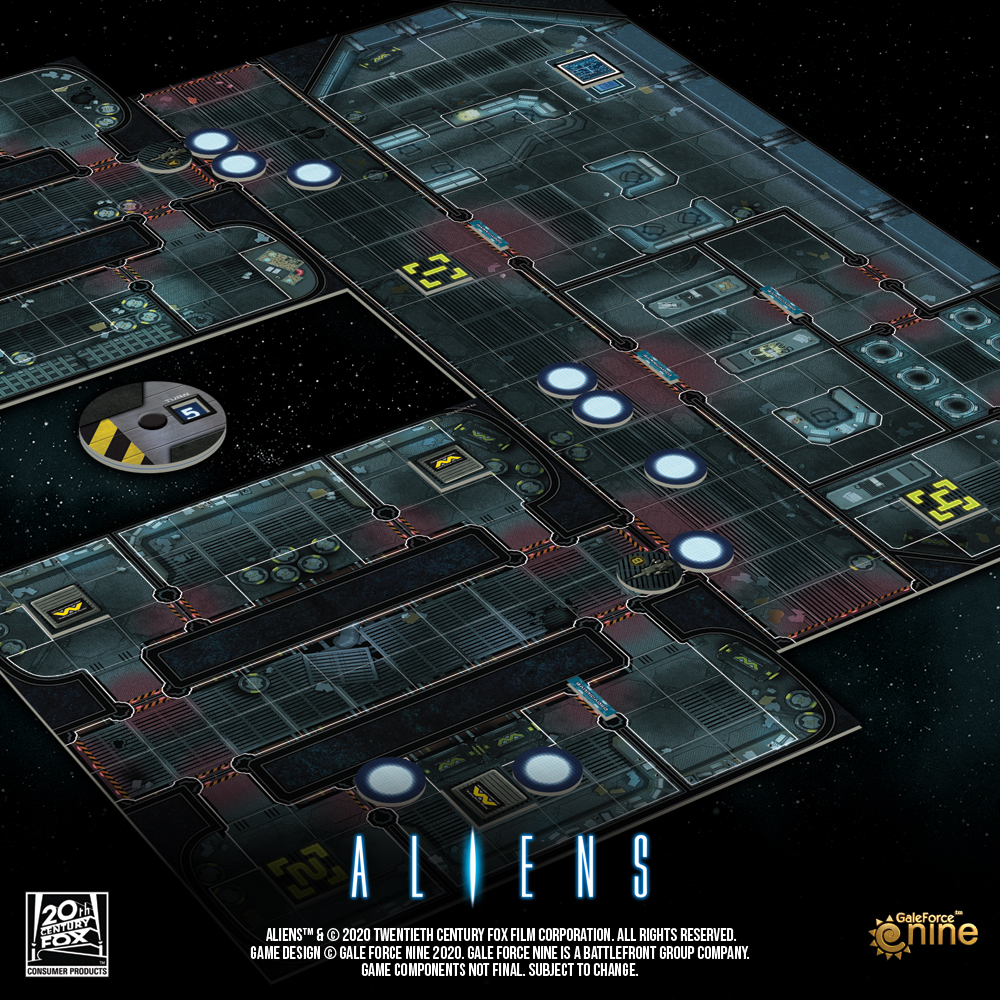 Science Fiction: the final frontier. These are the articles of the freelance journalist Peter Ray Allison. His continuing mission: to explore strange new realms of fiction, to seek out new genres and new visions of the future, to boldly geek where no one has geeked before.
More Goodness
aliensBattlefrontboard game