The complex rules make this game ideally for fans of Vampire: The Masquerade that play CCGs. Also ideally needs at least four players.

The fifth edition starter set contains everything needed to get started in Vampire: The Eternal Struggle, without needing to buy any extras. 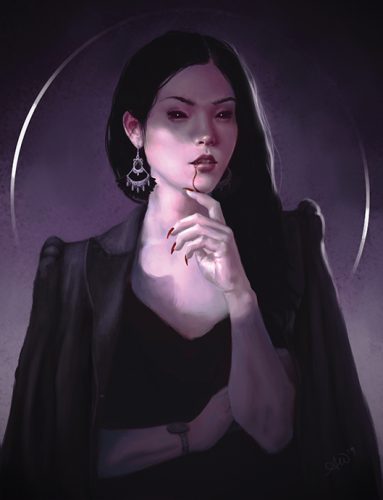 Vampire: The Eternal Struggle reflects the ancient war between vampire elders, called Methuselahs, as they seek to dominate and drain their opponents in an ongoing conflict spanning millennia.  The game recreates this conflict with each player taking on the role of a Methuselah, where they use their influence and minions to manipulate events in their favour.

The core aim of the game is focussed on reducing the blood pool of each player’s prey (the person on the left), whilst ensuring their predator (the person to their right) does not do the same to them.  As such, the game is best played with four or five players.  It is possible to play the game with only two or three players, but it can be a clumsy experience, due to the nature of the predator/prey mechanic.

This starter set comes complete with everything needed to play Vampire: The Eternal Struggle.  Included in the box are five starter decks, each reflecting a particular clan from Vampire: The Masquerade (Malkavian, Nosferatu, Toreador, Tremere and Venture).

Each clan has their own particular strengths and weakness, thus requiring a different strategy in order to be played effectively.  The accompanying strategy primer for each clan/deck helps new players to understand the game.

Instead of randomised card packs, we now have pre-configured starter decks.  Each deck comes in its own box for easy storage (although sleaving the cards will mean they no longer fit). 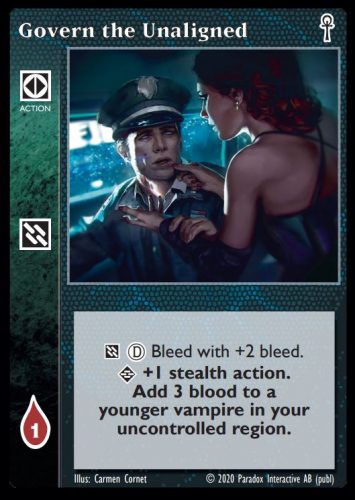 Rules wise, little has changed with the fifth edition of Vampire: The Eternal Struggle, thus cards from previous editions can be easily incorporated.  What Black Chantry have done is to clarify the rules, making the rulebook clearer and easier to read.

This is exemplified in how the rulebook has been laid out.  The basic rules form the core structure of Vampire: The Eternal Struggle, allowing the advanced rules in the sidebars to be included later.  Nonetheless, this remains a complex game, even at its most basic level.  Although Black Chantry have done their utmost to simplify the rules, it is helpful to watching videos explaining the game.  That said, the rules gradually become intuitive, evolving the game into a much more fluid experience.

Each round of Vampire: The Eternal Struggle is broken down into a series of phases: Unlock, Master (AKA Methelusah), Minion, Influence and Discard.  What was refreshing is that there is no draw phase, as a player draws new card each time they use or discard one.  This ensures players are always able to play their cards and prevents them from being starved of options.

It was great to see that the incorporation social interaction into Vampire: The Eternal Struggle with the voting mechanics.  Winning the game is not reliant on having the best cards, but on being able to negotiate with all the other players.

However, the predator/prey mechanics can be restrictive. A player’s prey will only ever be the person to their left, whilst the predator is always to their right.  Experienced players may wish to choose their seats careful.  With the focus of Vampire: The Eternal Struggle being on draining the blood pools, player elimination can lead to players sitting out the rest of the game and twiddling their thumbs.

The cards are densely packed with information, with symbols and a lot of text relevant to the game (as well as some background).  This can slow the game at times, especially for those unfamiliar with the cards.

Overall, Vampire: The Eternal Struggle is incredibly atmospheric, which is reflected in the fantastic gothic artwork.  The starter set is particularly excellent, as it functions just as much as a standalone box set, as it does a starter set.  The price may be more than similar starter sets, but there is a lot in this set and it includes enough for five players.

Ultimately, Vampire: The Eternal Struggle seems to be designed for the intersection between fans of fans Vampire: The Masquerade and collectible card games. 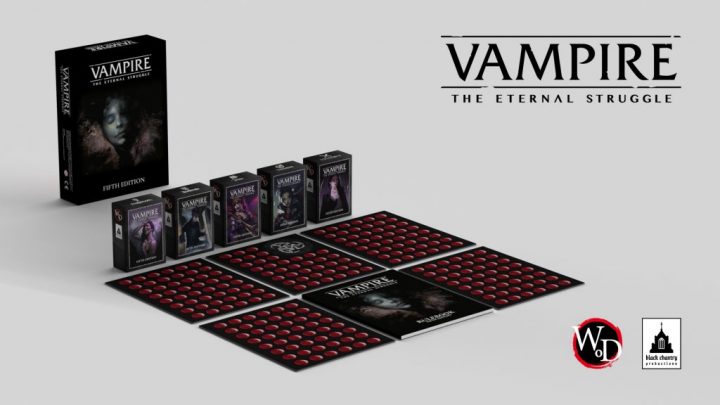