- Fun, Atmospheric Dungeon Hack
- Streamlined and Straighforward Rules Makes for a Fast-Paced and Engaging Game
- Won't Take Up Entire Floors With Miniatures and Floorplans
- Play Cooperatively with your Friends or as a Solo Game

- Not For Those Looking For a Deep Roleplay Experience

A must-buy if Santa left you some spending money or if you're looking for a dungeon diver that wont take over your entire spare room, Warhammer Quest: The Card Game is a fine addition to anyone's game collection. 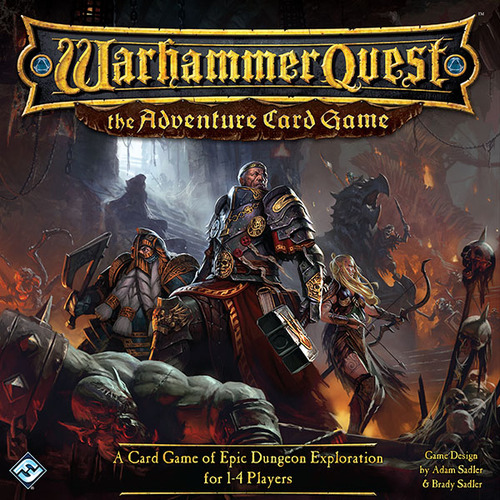 Anyone familiar with Games Workshop’s back catalogue will know that it houses a fair few long-forgotten gaming gems. Titles like Necromunda, Blood Bowl, and Gorkamorka still hold a cherished place in many an aging tabletop enthusiast’s heart but, for me, none hold as dear a place as Warhammer Quest. Released back in 1995, the original miniatures game was a lite version of the company’s successful Warhammer Fantasy Roleplay series, but with a more streamlined system that forewent the need for a Dungeon Master, replacing him or her with randomly generated adventures. Focused on amassing as large a pile of treasure as possible while destroying entire subterranean ecosystems, Warhammer Quest was a huge amount of fun and a great introduction to a fantastic hobby.

At first glance, Warhammer Quest: The Card Game appears to continue the title’s ethos of providing a lighter version of a more complex product, this time the behemoth that is Fantasy Flight Games‘ modern take on Warhammer Fantasy Roleplay, with which it shares some system elements and the Grimdark™ art style adopted by the current Warhammer games.

WQ: TCG is a cooperative adventure card game for 1 to 4 players in which you progress as one of four characters, performing actions and working together as a group of adventurers to obtain loot, kill nasties and, eventually, defeat the big bad Nemesis. Maybe. If it’s anywhere near as tough as the original you’ll more likely be Skaven food long before that… 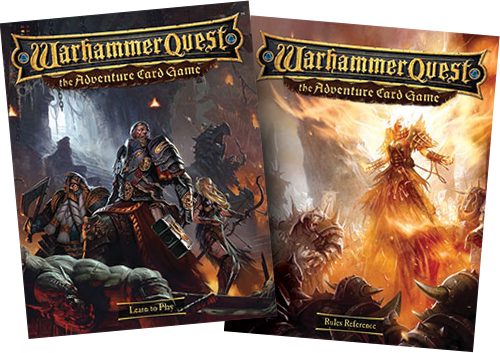 The box comes with everything you need to play, including some nice slim rule books, four character card sets, quest sheets,all the tokens you can eat, some nice custom dice, and more cards for enemies, locations, gear, all the nuts and bolts of your standard dungeon delve. The rules are very clearly presented and refreshingly comprehensive for an FFG game, with a tutorial game thrown in to get you going faster. The artwork is amazing, something that won’t come as a shock to any aficionados of Fantasy Flight’s other card games, and the all the bits and bobs do a great job of establishing the atmosphere of grim fantasy familiar to any Warhammer fans.

The Characters come in Ironbreaker, Waywatcher, Warrior Priest, and Bright Wizard flavours (or warrior, elf, cleric, and mage if you’re nasty) and each has a different play style which will need to be mastered and synergised with the other players if you are to snatch victory from the slobbering jaws of defeat. Here’s a quick breakdown of what you’ll be dealing with: 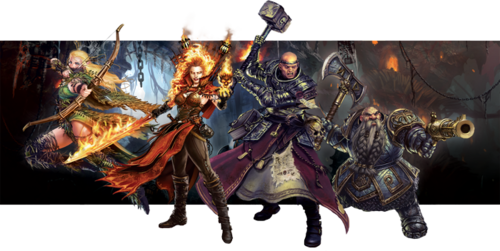 The Ironbreaker is the tank of the team, taking on multiple enemies and able to soak up more damage than his compatriots, Not so great on support and will eventually run out of steam without a healer backing him up.

Handy with a bow, the Waywatcher is the team’s ranged expert and specialises in taking out enemies with less risk to your flimsy elven body. A support character, the elf can’t take much in the way of damage but is great at easing the pressure off the team’s front line.

Ostensibly the healer of the party, the Warrior Priest also makes for a fairly heavy-hitter when it comes to…er…hitting, complementing the Ironbreaker’s ‘come one, come all’ attitude with the ability to do extra damage by calling upon his faith in Sigmar. Tough and healey, the Priest makes for a good all-rounder.

The Bright Wizard is the wild card of the game, a masochistic powder-keg whose jam is taking wounds to beef up her dice rolls, effectively burning herself out to further the mission. This is, of course, in the fine tradition of all the Warhammer world’s magic users, attempting to bend the volatile Winds of Magic to their whim and obtaining great power at a high cost. Fun and unpredictable, the Wizard is the most vulnerable and therefore dependent on her fellows to keep the giant wolves from the door. 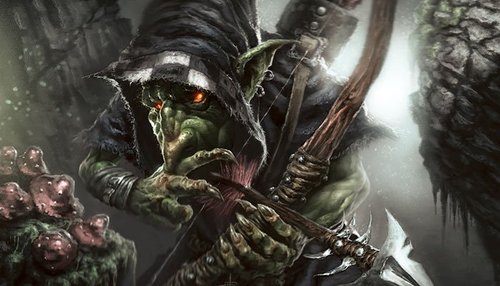 The card game uses an activate/exhaust system in which players resolve actions and encounter enemies throughout a series of fast-paced phases as they explore a dungeon and accumulate stuff. The phases are broken down thusly:

In the Hero Phase players activate a card from their play area to either Explore, Attack, Rest or Aid. The number of actions a player can take in a round can vary so it pays to consult your team about who is going to do what. Most of the options are fairly self-explanatory, but the Explore action is the meat of the game, revealing new parts of the dungeon and generating new beasties for the adventurers to face. 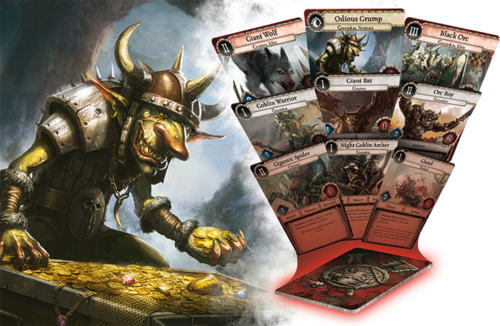 The Enemy Phase is where any monsters still breathing get to avenge their fallen comrades or sneak off back into the shadows to strike later. The game comes with a plethora of greenskins and the rat-like Skaven, each with different abilities and levels of challenge which the players will fight using a very straightforward combat system, keeping the action moving at a fair pace.

The part of the dungeon the players are currently in is determined by the Location card, drawn at the beginning of the game. These, as well as providing some atmospheric fluff, tell the players how many enemies they are fighting, how many are skulking in the shadows, and how many turns it will take to explore their surroundings. In Location Phase the players read the card’s special text and resolve its effect which can range from exhausting some of the party’s actions in the Desecrated Shrine to healing enemies in the Villainous Sanctum. 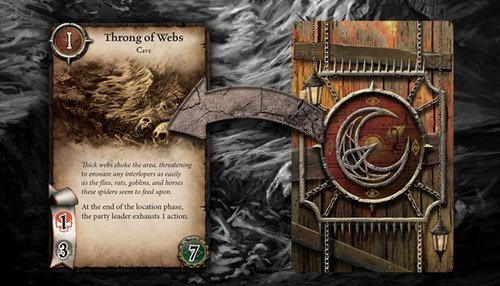 The game comes with six double-sided Quest Sheets which include the five-part campaign “An Uneasy Alliance” and a one-off “Lost in the Dark” delve quest which provides players with a shorter version of the main quest. All the quests come with full details for setup, rewards and penalties depending on whether the group won or lost the quest, and a gripping background story that connects them together across the campaign. 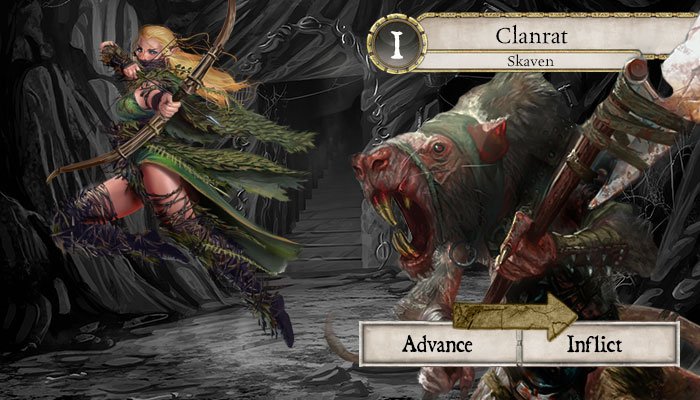 While systemically a quite different beast to its progenitor, I really enjoyed Warhammer Quest: The Card Game. Reminiscent of other coop dungeon crawls like the Descent series (in fact one of the creators, Adam Sadler was lead designer on the vaunted Second Edition as well as many of the expansions), WH:TCG provides a fun and enjoyably intense evening of short inter-linked quests that can be played alone or as part of a larger campaign over which players can progress their characters before taking on greater threats. The system is slickly designed for ease of play and the tutorial provides a convenient entry-point for new players while the campaign and advanced rules will challenge even the most experienced adventurer.

Foregoing the models and scenery of its stablemates, WQ:TCG manages to provide a comparable experience at a fraction of the cost, saving both money and shelf space. A must-buy if Santa left you some spending money or if you’re looking for a dungeon diver that wont take over your entire spare room, Warhammer Quest: The Card Game is a fine addition to anyone’s game collection.

It would make the old man proud.

Pick it up for an RRP of £29.99 use our store locator to find somewhere local.

Trapped in the past, Ben Fee finds himself leaping from life to life, putting things right that once went wrong, and hoping each time that his next leap will be the leap home..........
More Goodness
ben feeFantasy Flight GamesGames Workshop