by James Buckinghamon 02/04/2014
The Eurogamer Expo for me has become an annual pilgrimage to London to properly geek out in a gaming sense. I don’t get to do that very often, whereas for my inner movie geek I can do that at the cinema, for my comic geek I can spend a day in Forbidden Planet. Having kids, […] 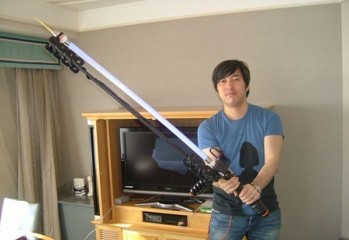 Suda51: Games matter, not the platform

by Stephen Breweron 21/12/2013
Goichi Suda, also known by his nickname Suda51, is the creator of cult titles such as No More Heroes and Killer 7.  In his latest interview he argued it is too soon to judge the new Playstation 4 and Xbox One as platforms, and argued that it’s the games that are the most important thing. He also suggested during the interview […]
The Geek Pride Cast
Tweets by @GeekPride1