previous
Read Only Memories, and why it's the most important game on Kickstarter right now
random
next
Christopher Evans Welch, original voice actor of Miles "Tails" Prower, dies in LA

After a few little teasers for the upcoming film, the first full-length trailer for The Amazing Spider-Man 2 was revealed earlier today. Set to hit the cinema in May 2014, the first look trailer is a bit of a beast, jam-packed with Spidey taking on a number of baddies and raising plenty of questions about what we can expect next Summer. So, let’s take a look at what’s in store for Marc Webb’s re-imagining of this comic book classic. 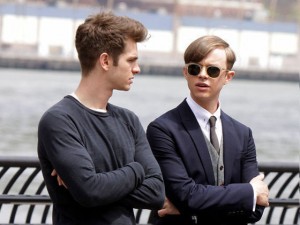 One of the key plot elements of the sequel will be the introduction of Harry Osborn, played by the fantastic Dennis DeHaan. A relative newcomer to the big screen, DeHaan has quickly become a prominent young actor appearing in recent successes such as Chronicle, Lawless and The Place Beyond the Pines.

To many, DeHaan’s casting as Harry reflects the way in which Webb’s Spider-Man movies are closer adaptations, with him appearing as a better match to the role than James Franco’s portrayal in the earlier films. With the character of Mary-Jane being cut from The Amazing Spider-Man 2 and her appearance delayed until the third film, this allows for a better focus on the development of Harry Osborn’s character and his relationship with Peter Parker.

In terms of villains for the upcoming sequel, Spidey’s had three big baddies thrown at him. Jamie Foxx appears as Electro and despite the character going through quite a re-design, I do rather enjoy the look they’ve gone for. We’ve also got The Rhino, played by the excellent Paul Giamatti and there’s a glimpse of the Green Goblin with a little mystery surrounding his role in the trailer. The first look trailer also offers us a sneak peek at suits for both The Vulture and Doctor Octopus, could we be seeing them in the third movie perhaps? Now, I bloody hated Doc Ock in Spider-Man 2, so let’s hope Marc Webb ups the stakes with that one. 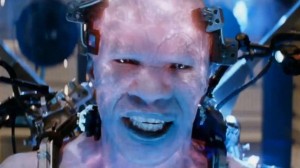 The decision to delay MJ’s introduction until the third film also allows more time for Peter Parker’s relationship with Gwen Stacy to develop. I’m definitely happy with this decision as I was very disappointed with Gwen’s portrayal in the Tobey Maguire films and her lack of presence overall. Also, I think there’s great chemistry between Andrew Garfield’s Peter Parker and Emma Stone’s character and allows for a more accurate portrayal of his funny personality. 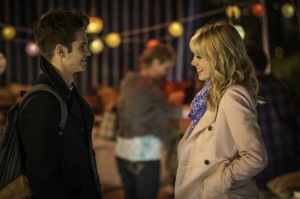 Now, whilst I do love Emma Stone and I’m happy she’s with us for a while longer, the development of Peter and Gwen’s relationship can only go so far. If you’re a fan of the comic books then you know exactly where I’m going with this and MJ’s introduction in the third film is a further hint and what might happen next year.

Overall, I’m pretty impressed with the first trailer for The Amazing Spider-Man 2. I was sceptical at first over Jamie Foxx’s Electro and using three of Spidey’s classic foes in one movie. However, after seeing this trailer my opinion has changed and I can’t wait to see what’s in store next Summer. I also think that the decision to delay MJ’s arrival was a great idea and feel that it will allow for better character development in the series. I’m a big Spider-Man fan and hated the first trilogy starring Tobey Maguire. Whilst Marc Webb’s reinvention was in no way perfect, I felt that it was a much better film adaptation of my favourite superhero series.

Keep posted for more news on the upcoming movie over the next few months and let’s hope the trailer gets your Spidey senses tingling! 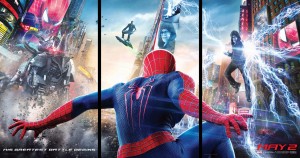 Click on the image to see the full version. Seriously, do it.

I'm an aspiring film journalist living in Chester. Into all kinds of geekery from N64 to Xbox, graphic novels, cosplay anime and more. I have an unhealthy obsession with Pokémon and the Legend of Zelda series. So much so that I have two Zelda tattoos and various Pokémon lurking all over my house. In my spare time when I'm not busy being a real person and working, I'm writing or making retro games jewellery. I'm also obsessed with pandas. They're fabulous.
You might also like
Andrew GarfieldbreakingElectro