Our Friends at the 99th Garrison will be appearing at the Comic Strip Weekend on the 22nd and 23rd of September in Liverpool. It looks like it is going to be a brilliant couple of days, so if you live in the area, or can travel then please check it out; and if you see the Empire there… tell them Geek Pride sent you!

More about the weekend from Comicconventions.co.uk below: 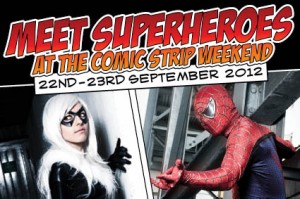 The great thing about this event is that Liverpool rarely actually has any comic related events, despite having two big chain comic shops there. So even small events like this are really great for locals. And what is brilliant for comic fans? Well, small events like this mean free sketches, and our regular readers will know that we love our sketches.

The event takes place in the Liverpool spaceport, it’s just a click off the main city and is very easy to reach either via public transport or by car.

So anyway, you’re probably more interested in who will be there and what will be going on. As I mentioned, this is a fairly low profile event, which means they don’t have hundreds of guests, they have two! But, that being said in my ex
perience low key events tend to give you the chance to really pick the brains of the guests. These family orientated events give a vibe like no other and are really worth checking out if you can, keeping in mind NICE is on the same weekend.

Anthony Williams, an artist who has worked on a large list of things, everything from GhostBusters to Batman. He also worked on 2000AD, so those looking for something to remind them of the recent Judge Dredd film are in for a treat, as he also worked on the supporting character, Judge Anderson In “Exorcise Duty”. He’s also worked on a few Elseworld one shots, including “The Superman Monster”. Which was one of my favourite Superman stories.

Accompanying Anthony Williams, is Andy Lanning. These two guests frequently worked together and between them have a near endless portfolio. Lanning has worked on everything from The Sleeze Brothers (Which is his own work) to Wonder Woman. As well as writing, Lanning has inked and pencilled various works.

Both Anthony and Lanning will be providing advice and will be showcasing their work, including original prints. They’re encouraging people to bring portfolios along to show them. As I mentioned, they’re also offering limited free small sketches.

The Spaceport’s main objective is a fun, educational family day out which means they’re running a workshop throughout the weekend. “The Science of Superheroes” these are hosted by Matt Dickinson who a lecturer at UCLan (A Lancashire University). The workshops look at the scientific side of super heroes, such as what Spider-Man’s web would be made of, and how possible it would be to fuse metal to your skeleton, thinking of Wolverine. (Maybe I’ll ask them about getting metal coated skin?).

There’s also going to be some people in costumes, a small crafting area where people can craft their own masks and gadgets as well as a face painting area.

On top of this, they’re running a competition Anthony said:

“This weekend will really capture the imagination and bring Comic Strip favourites alive to both adults and children. We all have a superhero whether it was a family member, friend or TV character – someone we look up to or admire.

Tell us who that someone is for you and you could win tickets to the Comic Strip Festival and have an original illustration signed for you. Parents can enter for their kids, or can nominate a superhero of their own!”

Entries should be tweeted to @merseyferries including your name, hometown, and a little bit about your superhero. Nominations must be received by midday Thursday 20th September. Mersey Ferries will pick one winner, who will receive a family ticket and a signed original illustration by Anthony Williams.

Tickets are at standard Spaceport price, which start as low as £4.50, full details here book in advance

From N.Ireland but now living in Manchester, England; Matt is the founder and CEO of Geek Pride. Interests: Photography, Music, Art, poetry, Military History, Model making and painting and of course gaming (table top and computer)
You might also like
breakingcomiconcosplay