Straight to the point: Warm Bodies is a recent adaptation of the book with the same name by Isaac Marion. It’s nice enough if you have never read the book, but if you have, save yourselves the trouble and skip it, lest you find yourselves muttering at the screen as the film progresses. 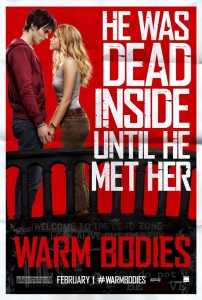 I admit I had never heard of Warm Bodies until the trailer came up on my radar a few months ago. Despite the premise of it -the love story between a dead man and a very much alive woman– it looked interesting and funny, something that is hard to associate with the zombie genre in general, so I gave the book a chance and was pleasantly surprised by it, so much so that I raved about it for a while, all the way to the cinema, with the friends I’d convinced to join me, because it would be AMAZING! Though amusing, Warm Bodies proved to have the same problem most movie adaptations face: the inability to accurately transfer the events that took place on paper to a different medium without twisting the story into something almost unrecognizable.

Seen as a stand alone movie with no connection to its literary roots, Warm Bodies is fun and unassuming. It doesn’t aim to change the world or make it a better place, even remotely, focusing instead on the love story between Julie and R (the little zombie that could and wanted to be better) but in doing so it misses its very essence. Played by Teresa Palmer and Nicholas Hoult, the two love birds are interesting and appealing, making you curious about where they are coming from and what they are aiming towards; unfortunately, for the most part, these questions go unanswered. While the book focused on giving as much background to the characters as possible -showing why they were the way they were, what made them tick- in the film adaptation we’re given the cliff notes, insufficient to get a real grasp of the characters.

True, not much could’ve been done with less than two hours of film, but then why even bother? Why turn something good that people liked into something entirely different and slap the same title on it in order to attract more viewers? To be honest, I felt a little cheated when I left the cinema, having had to stand there for 98 minutes and watch a book I came to love being stripped to the bones and flaunted before my eyes as nothing more than a meatless carcass. Perhaps it’s a harsh metaphor, but it does suit the context, doesn’t it?

We have villains (The Bonies) whose purpose is never explained, we have Dave Franco as Perry (a major part of the whole change that R goes through from corpse to living again) who is completely disregarded and whose part in sparking the healing process of humanity is not even mentioned, we have John Malkovich who isn’t used to his full potential, playing a man that’s anything but milk and honey in the book, but in the movie adaptation somehow becomes father of the year material… and the list could go on and on. The bottom line is that this movie desperately lacks any form of conflict. At first glance it seems like it’s there, but if you look deeper you’ll notice it’s nothing but a shallow attempt to make the movie seem more interesting than it is. Perhaps it was all about who they decided their target demographic was, and based on Nicholas Hoult’s choice as the lead actor (which is not to say he’s doing a bad job, he’s actually great, not to mention adorable as R) I’m guessing they thought it would consist of less readers and more teenage girls in need of a good romance between the living and the dead, but it was still disappointing to see so much potential wasted on giving people a happy ending when things were hardly as simple in the original source.

I suppose having people eaten on-screen would hardly be as appealing as a balcony scene mirroring Romeo and Juliet, right? Because that’s what Shakespeare was lacking. More zombies. 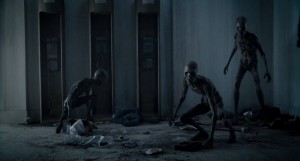 Despite my earlier rant, the movie isn’t bad. It just isn’t all that good. However, it all depends on why you’re going to see it, whether it is to feel like you’ve had the full Warm Bodies experience that includes both the book or the movie, or because you would like to have some fun with a zombie flick. If it’s the former, you might end up as disappointed as I was. If it’s the latter, then you might just have a blast. Even I found myself chuckling more than once and putting faces on the book characters was the added perk I always look forward when I’m watching one adaptation or another. All in all good, but not impressive.

If you liked Warm Bodies and disagree with me, the comment section below is for you, let me know what I’ve been missing, if you agree with me, by all means, use it just as well.

What's there to say about me? I love the sci-fi and fantasy genre when I read, but I am in no way limited to that alone. I do think Frank Herbert deserves a statue for his writing(if there is one, point me in that direction, please). I enjoy writing quite a lot, but I am also kinda lazy. If you want to make me happy give me books or Doctor Who collectibles. Or a real TARDIS, in which case I will love you forever.
You might also like
dave francojohn malkovichnicholas hoult