After last week’s rather tedious episode, I ended my write-up with the hopeful note that the return of The Governor would liven the show up a bit (Get it? Liven? Zombies?). Being the first legitimate human antagonist to the group, and a somewhat iconic character of the Comic books, I hoped that his inclusion would remove some of the navel-gazing that the show likes to indulge in, and get the story moving forward.

And I was wrong: the show’s writers just used this as an opportunity to continue to stare deep into their belly-buttons, hoping to find something of interest. However, this week, they managed to pull a very good episode with some back story. 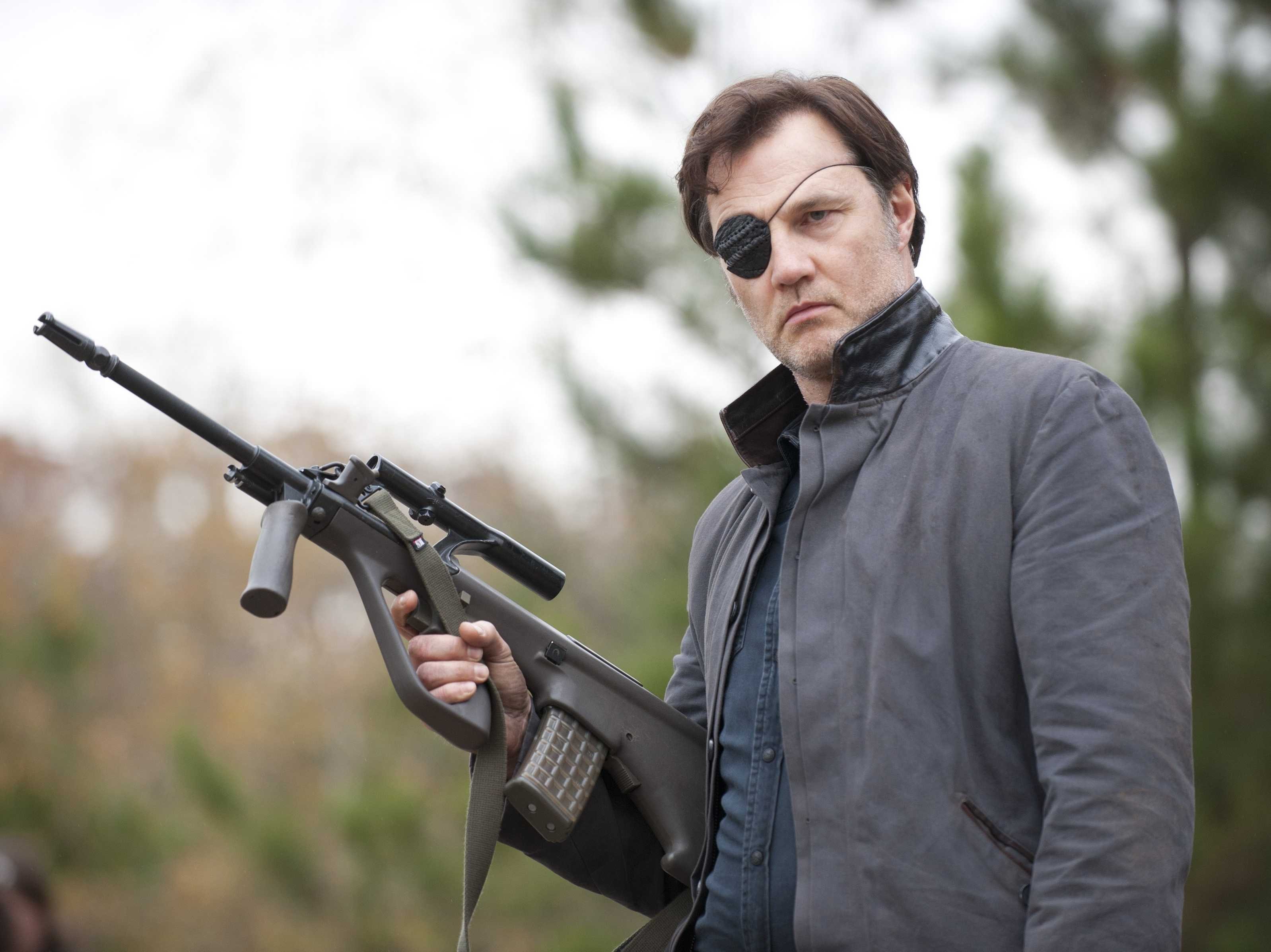 The episode starts where we last so The Governator, at the scene of his murder spree following the failure of his assault on Rickopolis. Driven away by his freaked-out Lieutenants, and seemingly broken by his failure to avenge his daughter’s second death, he loses the will to live, shown by his willingness to let a FLAMING ZOMBIE get within inches of him. He is saved by one of the Lieutenants, but is then abandoned by both, who leave him to his fate.

His fate being, apparently, a montage. Which is the least he deserves, the scoundrel. It starts with him burning Woodbury, the metaphor for the whole episode. His beard lengthens, he trudges, and he eventually finds a little girl who he can use as a surrogate for his daughter.

Megan lives with her mother, aunt, and grandfather in an apartment complex which no one has attempted to plunder, for some reason. The Governor is allowed to stay the night, but begins to get a little drawn into the family, who are hungry for human contact after somehow managing to avoid everyone around them and almost every Walker. It stretches credulity quite a bit, but I went with it.

As he gets drawn in, he reflects on his own lost family, on particularly his Zombie Daughter (My Zombie Daughter sounds like a kid’s book, by the way). He comes out of his shell a little, which includes going to find a Backgammon set for them. But their willingness to make him a part of the family is at odds with his desire to cling to the past, to the family he lost, and he chooses to leave rather than face that choice.

Before he gets to go, though, Lilly – who is Megan’s mother – begs him to go to the nearby Retirement Home to get more oxygen for her cancer-ridden father. The Governor agrees, unable to turn down the heartfelt and simple request, which is the beginning step of his oddly-flourishing, or returning, humanity.

He goes to the Retirement Home and he gets what he needed: standard side-quest, really. On his return, Lilly tends to his head wound, and then leaves Megan alone with the Governor whilst she goes to get healing ointment. This is the first time the two have been alone, the abandoned daughter and the grieving father, and they bond almost immediately, with the Governor’s parental instincts kicking in.

This marks a turning point for him, as he burns his old photo of his wife and daughter, leaving the past behind in ashes, where it may belong. We next see him unbearded (he should have trimmed, not eviscerated, those fine whiskers), with his hair shorter, and looking healthy. He has settled in, made himself part of the family.

However, we are also warned that his previous self has not gone altogether with a clever scene of him teaching Megan to play chess, whilst her mother and aunt see to the ailing old man: he talks about the King being the most important piece, that the pawns can all die, but the game won’t be over. Someone on the writing staff thought this was too subtle, though, so they made Megan draw an eye-patch on one of the Kings for THE HARD OF UNDERSTANDING.

Shortly after, Megan is informed that her Grandfather has died. They go into his room to mourn, to say goodbye, but apparently they’ve been so insulated that this is the first death they’ve seen, because they take no precautions with the corpse. The Governor sees the danger and, when the old man inevitably rises, he leaps into action by braining him with an oxygen tank. Lilly and Tara forgive him shortly after, but Megan is terrified of him now, and hides from him.

This rejection by Megan makes the Governor try to leave. But, again, he is stopped by Lilly, who convinces him to allow the three of them to go with him. They are a family now, and that means accepting Megan’s rejection and fear. Something the Governor actually understands.

Out on the road, the Governor helps them travel, and has sex with Lilly. Their vehicle dies, and then they are attacked by a herd. Ridiculously, Tara falls and twists her ankle, which is one of the most stupid tropes in existence, but there you go. Dropping their gear, they go to run, but Megan is frozen by fear. The Governor seems to break her terror with his panic at the danger, his concern for her, and they run, the Governor holding her tight.

Sadly, he falls into one of his own traps, his past coming to get him. And there are dangers down there, in the form of three Walkers. With Megan screaming, terrified, the Governor fights the Walkers off with his bare hands, and, covered with blood, promises Megan that he will never let anything happen to her. This metaphor is the excellent finale to the episode, perfectly topped with the cherry of one of his old Lieutenants arriving, shocked at what their trap has caught…

The flourishing / return of the Governor’s humanity is handled quite well in this episode, and shows that revealing character is just as important for a story as action. The problem for most of The Walking Dead since Season 2 has been that the writers haven’t had much more in their tank for the core group, or, at least, not as much as they thought they had: Carl, Rick, Carol, and Daryl have all changed as characters, grown, but the rest have been quite static, particularly in this season. This excellent handling of the Governor’s return to fatherhood, to being within a family, shows that the writers still have the chops for creating interesting characters, so it shows both promise and merely highlights the frustrations many have for the rest of the series. Hopefully, this will be the catalyst for the series to kick on, and reclaim the heights of Seasons 1 and 3.

Sean is an editor, writer, and podcast host at Geek Pride, as well as a novelist. His self-published works can be found at all good eBook stores.
You might also like
season 4the governorThe Walking Dead