Last month HBO gave us a tasty teaser from the upcoming sixth season of True Blood hitting the US next month. Well, the time has come for a full length trailer to give a better insight into what we can expect from the next series. That’s right, they’re finally showing us more than Bill going a bit mental with his ubervamp roar. 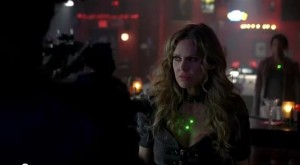 It looks like the vamps really are in trouble this season. After the actions of Bill and fellow Lilith worshippers last series, the humans have decided it’s time to reclaim the world from the vampires. This time, the vampires are actually scared.

Now that there’s an uprising, peoples true colours are really coming out. Bill’s definitely looking less crazy in a longer look at what’s to come, but he still thinks he’s god. Literally.

There’s plenty of flesh on show as usual, lots of topless Eric and Alcide with Jessica looking rather nomm this series as well. Apparently, just because everyone’s in danger and the world’s at war, it doesn’t mean everyone stops getting laid. There’s a glimpse of Sookie’s possible new love interest, well, we can see him on top of her anyway.

With the tagline of ‘No One Lives Forever’, let’s hope that’s it’s not a hint at the rumours of a major character departure mid-season. I won’t tell you who, just give it a quick google and be prepared for your heart to drop. Premiering on June 16th in the US, check out the latest trailer and satisfy your thirst.

I'm an aspiring film journalist living in Chester. Into all kinds of geekery from N64 to Xbox, graphic novels, cosplay anime and more. I have an unhealthy obsession with Pokémon and the Legend of Zelda series. So much so that I have two Zelda tattoos and various Pokémon lurking all over my house. In my spare time when I'm not busy being a real person and working, I'm writing or making retro games jewellery. I'm also obsessed with pandas. They're fabulous.
You might also like
breakinghbonew trailer