Available on Steam, Xbox and Playstation

An incredibly well presented game that gushes theme with an intriguing story that pulls you along. However, prepare for a difficult challenge (that unfortunately isn't helped by the clunky controls and 'sticky' behaviour of your human charge) and a save system that mars the tension created by the game mechanics.

The fear of the deep blue is one that a lot of people, myself included share. Drowning, sharks, the darkness swallowing you up as you sink down into the watery depths, it all evokes a sense of trepidation, a sense of being out of control and dying in painful, terror filled dread.

Have I set the scene? I hope so, because that’s exactly what Anoxemia is trying to accomplish! Anoxemia at it’s heart is a puzzle game, filled with traps, dangerous routes and the ever-present fear of drowning in the dark. But it’s a little more than that, and with this review I hope to dive (sorry!) a little deeper.

Anoxemia pits the protaganist as ATMA, a tiny probe with the sole purpose seems to be to save their tethered, pink-moustachioed human diver who has been cut off from his ship by forces unseen. Ostensibly you are on a mission to collect plants that show signs of … for analysis by your bosses. However, as you journey though you’ll find the mission isn’t all it seems… In terms of mechanics, ATMA is the element that the player fully controls. Initially equipped with a sonar function, ATMA can move and detect the various enemies littered across the ocean floor. These include tiny sensors that drain ATMA’s battery if hit, mines that explode it even brushed lightly, and even mini-subs that follow you around the level and skewer your human charge. ATMA also keeps a tab on your power and oxygen levels, which are basically timers that tick down and need constant recharging by the batteries and air tanks scattered throughout the levels. Later on, ATMA also picks up a couple of ‘weapons’ like a harpoon and an EMP that help you in protecting the human.

Suffice it to say, there are a lot of ways to die. And you’ll die. A lot. Whilst ATMA is immune to most enemies, the human you tow around is not. Unfortunately, pinpoint control is not a strong suite of this game. ATMA’s movement includes an acceleration and deceleration that can cause a great deal of consternation when trying to navigate some of the tighter gaps in the game. Couple this with the human’s movement (which tends to follow the shortest path to you, even if that path is through a naval mine) and his own acceleration/deceleration, and you’ll often find your little guy blearing into a laser grid or gently careening into a spike trap as you stop ATMA just in the nick of time. I can only think that this is designed to imitate the inertia one often feels underwater, but it adds a level of difficulty to an already tough game that makes me feel like I was fighting my controller as much as I was the game. This isn’t helped by the human’s ability to stick to even the smallest bits of scenery, especially infuriating when time is short.

Another element I found a bit hard to swallow was the double-whammy of a lack of checkpoints and the non-respawning chests that can provide life-saving oxygen and power as well as upgrades for ATMA like a stronger harpoon or more oxygen capacity. The game saves after each mission, including how much oxygen and power you had from the last one. So if you barely made it to the end of level 30 with seconds of O2 to spare, you’ll start mission 31 with only a minute of oxygen (the game will round up in this scenario). This happened to me on a number of occasions, which left me with two choices: grab as many chests as you can and hope they have oxygen in them, or back track a level or two and try to get through them quicker. The kicker is if I go down the chest route if I die I’ll need to reload the whole game to reset them as they don’t respawn between attempts. If I go down the back track route, I’m revisiting locations I was glad to get through in the first place. 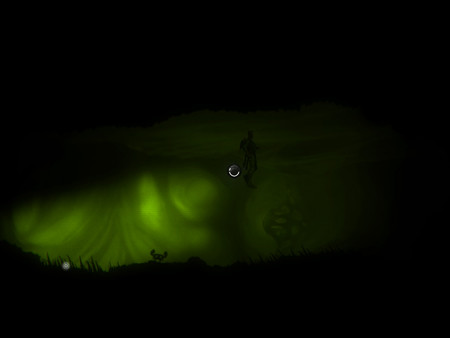 Things are starting to get serious…

At first, I thought the system was a great implementation of ramping up tension as you watch them count down to your death. However, random feast/famine distribution of these resources in each level coupled with the driving need to get each level done as soon as possible eventually made me start to dislike the pressure (especially as the human extoles ‘I need to collect as much oxygen as possible’ for the umpteenth time) as it started to feel unfair and to discourage exploration of the later levels.

Where Anoxemia really shines is in the atmosphere it portrays. The dark and brooding level designs that get grimmer as you progress, the sound track that cuts out during the stranger scenes of the game, the off-kilter text messages ATMA produces that make you think ‘OooohhhKaaayyy’ add up to sense of lingering dread and tension as you explore the levels. I especially loved the sudden ‘shock changes’ where the scenery suddenly changes to something much darker in theme. Suffice it to say this kept me playing as I wanted to unravel this mystery and find out exactly what was going on between ATMA and the human diver. Blood in the water

In summary, Anoxemia is an intriguing game and overall I must say I liked it; rich in theme but with a strange difficulty inconsistency compounded by a control system that is incredibly unforgiving. If you enjoy a challenge with a unique premise and have the patience (read: masochism) to stick at it, Anoxemia gives the ‘Dark Souls’ level satisfaction each time you finish a level. Just be prepared to fight some sticky controls.

An avid board and card gamer, this displaced Cornishman has spent way too much time playing games and skulking around his local hobby shops. He later escaped to Swindon, the land of roundabouts, where he currently designs games whilst infecting those who stand still too long with his gaming lurgy.
More Goodness
NewsReviews