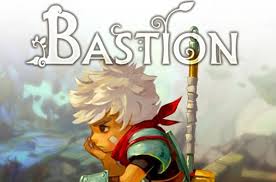 The reception for this independent game was quite outstanding, and with good reason. I started playing Supergiant Games’ first-ever game, and within fifteen minutes was enthralled with it. From Jen Zee’s (Street Fighter 3: Third Strike) beautiful art style, to Logan Cunningham’s great narrative style- whose voice in this game rates as high as Morgan Freeman’s narration in films. With more than 3,000 lines spoken it really does seem to live up to one of the games unique features called ‘dynamic narration’. 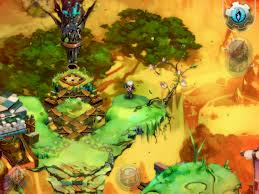 The storyline is unknown to the player to begin with: you wake up in the remnants of what was once your room and make your way through the first level trying to find the Bastion, a place where all the population should head to in case of disaster. 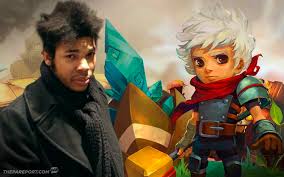 Rucks and The Kid

As Rucks (Logan Cunningham) delivered the story to me, I decided to go off on a tangent and start breaking barrels; I heard a voice, ‘but the kid just raged for a while. Now at this point I hadn’t even heard of the game’s ‘dynamic narration’ and I had to stop and wait for a while to see if Rucks would speak again. He didn’t, but I did get to listen to Bastion’s good musical score, which took me back to the days of old Legend of Zelda style of music.

The controls for the PC are quite intuitive, there isn’t anything groundbreaking here, WSAD to move, left-mouse button to attack, right-mouse button for second attack, etc. But for a game like this you don’t need to over-complicate things- if it ain’t broke don’t fix it. 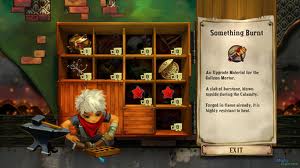 It has a nice leveling-up system; like most RPG’s, you gain experience by killing monsters you encounter on your journey which means you go up levels. For instance, the first level update is between ‘Aquirt Cider’ (+10 health) ‘Dreadrum’ (+10% critical hit chance) or ‘Fetching Fizz’ (Absorb stray fragments).