A solid turn-based tactical game with excellent customisation and a gripping story that will appeal to fans and newcomers alike.

The amount of detail can initially be overwhelming and there are some annoying issues with the cinematic views.

Battletech is the game that we have been waiting for; a genuine Battletech experience and a spiritual successor to the Crescent Hawk games.

Those awaiting the next XCOM will find more than enough to sate their yearnings, whilst at the same time not feeling like they are playing an XCOM derivative.

Battletech is the latest game from Harebrained Schemes, the developers behind the critically acclaimed Shadowrun trilogy.  Battletech is based upon the mech-themed board game of the same name, which follows the ongoing wars between competing interstellar dynasties that are fought using towering battlemechs.

Whilst the board game evoked the grandeur of colossal mechs warring against each other, a common complaint was that it often boiled down to endless series of dice-rolling and number-crunching.  Thankfully in the Battletech video game, much of these mechanics are undertaken by the computer.

Given that Battletech creator Jordan Weissman (interviewed here) is the founder of Harebrained Schemes, it should come as no surprise that Battletech is a faithful adaptation of the board game, retaining all the key elements that made the boardgame so unique.

There have been various video game adaptions during Battletech’s thirty-four-year history.  The MechAssault series were first-person shooters whilst the MechWarrior games were more akin to a mech simulator.  Meanwhile, MechCommander delivered the epic-scale real-time strategy of the games, whilst The Crescent Hawk games were turn-based tactical roleplaying games. 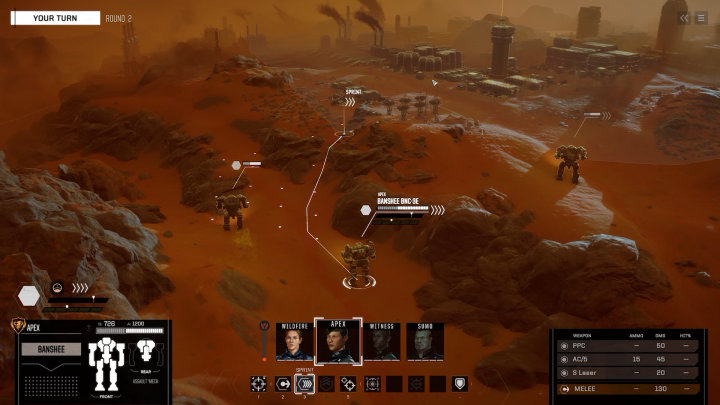 It is these latter games that Battletech is closest to, with the player leading a mercenary company of four mechs (known as a lance), through a series of turn-based missions.  In between these missions, players need to manage resources, repair damage and choose the next contract for their mercenary company.

It is in this regard that Battletech has been compared to the XCOM, but the similarities end there.  Whilst XCOM units have endless resources – grenades and ammunition are seemingly infinite – everything in Battletech comes with a cost.  Firing energy weapons generates heat (which can lead to a mech overheating), missiles and ballistic weapons use ammunition that needs to be resupplied, whilst armour needs to be repaired and replaced, which agains costs money.

Furthermore, there is no such thing as a flawless mission in Battletech.  Given the size of the mechs, cover is not an option, except in terms of the environment.  Every time a mech steps out to fire at an enemy mech, it is leaving itself exposed to incoming fire.

Battletech is all about attrition, balancing the cost of shooting an enemy mech with the benefits it will bring.  This is further reinforced when it comes to salvage – recovering resources afterwards – a downed but lightly damaged enemy mech can be salvaged and repaired by the player to use in the future.

There is saying in Battletech that “meat is cheap, but metal is expensive”, and that is just as true in the video game.  The player may lose a pilot who has been gaining experience through several missions, but they can be replaced.  If a mech is destroyed, or so damaged that it needs to be repaired over several weeks, then the game could well be over as the player will find themselves fielding a smaller force.  Death will not lead to game over, but bankruptcy will. 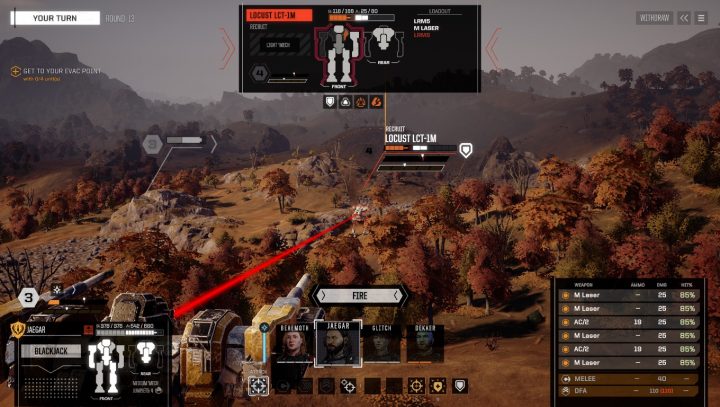 Each mission in Battletech takes approximately half an hour, as the player’s mechs stride into position, searching for the enemy and finding the optimum position from which to attack (whilst the enemy does the same).  There have been some complaints that this can take too long, but there is something to be said for Battletech’s building of suspense – when the crunch comes it feels akin to an epic battle between titans.

However, this also where Battletech’s flaws appear.  Often, after orders are given, the game will enter a cinematic mode, following the mech as it completes it orders.   Generally, it looks amazing, with the camera shaking as the mech strides past, but it is not uncommon for the view to be obscured by environmental features, such as buildings or mountains, leaving the player wondering if the mech was hit or not.

That being said, this is a relatively minor complaint, considering what is an otherwise incredibly satisfying game.  Unlike other strategy games, where the story is perhaps the weakest point, Battletech delivers an epic tale that fits within the existing Battletech setting, yet at the same time being an intensely personal story that the player becomes invested in.  Alongside this, the accompanying artwork is amazing, and whilst it is not CGI, the story more than compensates for this.

Fans of the Battletech board game will be delighted to find that the mech customisation has been retained, allowing players to tweak each mech to suit their preference.  Whilst it may not encompass the detail that early MechWarrior games allowed – to the point of choosing engine size – there is sufficient detail here to satisfy the most avid Battletech fan.