Crypt of the NecroDancer – Review

A fantastic RPG and Roguelike with a unique premise. Buy it!

I’d heard a lot of good things about Crypt of the NecroDancer before I got to play it, and had seen a Let’s Play that intrigued me enough to give it a go. I am so, so glad that I chose to do so now!

Crypt of the NecroDancer is a Roguelike RPG much in the vain of The Binding of Isaac, one of my favourite games of recent years. You start out with one character and one limited set of weapons and items, and unlock more characters, zones, and items by playing through the starting area. The game is tough, meaning you will often fail during your first runs, but Crypt gets around this a little by providing a resource you gain from each playthrough to unlock more items: Diamonds. So even if you fail at the boss of Zone 1, you can still go back to the lobby and unlock upgrades or new items for the next run. In this fashion, the game takes away some of the frustration inherent in Roguelike games, and allows you to feel as though you are progressing with each run.

What makes Crypt of the NecroDancer really stand out is the rhythm game element: to move, attack, or use items, you must time your key presses to match the beat of a song. It may sound awkward, and can take a few minutes to get used to, but once it clicks the premise is fantastic. You get bonuses to gold and damage with certain weapons for matching the beat well, but are punished for missing a beat. Though doing so can be tactically advantageous with some enemies…

Crypt of the NecroDancer even has support for mods and for loading your own music. So if you have some death metal you want to dungeon dive to, or want to see how the game works alongside Rihanna, the games inner workings can process any song you load into it and make it available alongside your adventuring.

The enemies in the starting zone are simple but tough, and there is a well-designed but short walkthrough that teaches you how to anticipate enemy movements and when to attack. The enemies progress quickly even within the same zone, so you can still be caught out, but almost none of them are really unfair. Even the mini-bosses mostly have predictable patterns.

Apart from the dragons. I spent the first five hours or so just giving up whenever I ran across a dragon, until I finally learned the patterns required to kill them. And that would be one of the larger criticisms of the game: that some minibosses and other enemies as the game progresses have more difficult patterns and techniques required with little indication of what they are. It’ll be fine, though, once you git gud. 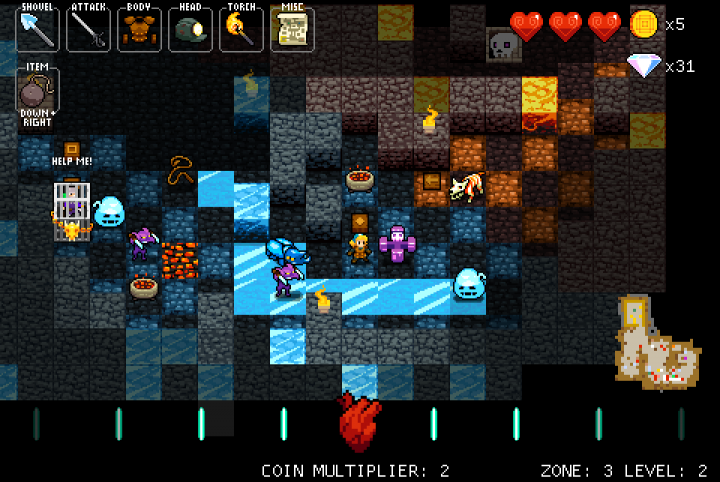 The weapon you hold also makes a big difference to the difficulty of the game. Finding a weapon with forward range, such as a spear or bow, can make the game much more manageable, whereas upgrades on the starting dagger make things awkward.. There is a good range of weapons available, improving the randomness and replayability of the game, The crossbow, though, requires reloading. This wasn’t explained anywhere, and I died a few times because my character wouldn’t attack.

Another petty grievance, but that’s all I really have against the game. It is gorgeously designed, the characters I’ve unlocked thus far as all interesting and unique, the gameplay and main premise are stellar, and the soundtrack is amazing. Brace Yourselves Games have produced a tiny gem, a classic. Simply put, anyone who enjoys Roguelikes or rhythm games will love Crypt of the NecroDancer. Buy it now on Steam.