The restricted situational awareness due to the lack of radar/etc means that enemies can surprise you when the camera is pointed elsewhere.

Dark Future: Blood Red States is satisfyingly visceral experience, which succeeds in bringing the classic table-top game to life in a way that could never have been achieved before.

One of the first things players will realise when playing Dark Future: Blood Red States is that, despite the countless beweaponed vehicles they will undoubtedly face, is that this is not a driving game.  Instead, Dark Future: Blood Red States is best described as a tactical car combat simulation, where the game’s focus is more on force projection and positioning than on actually driving the car.  It is for this reason that the game is so unique.

Based on the Games Workshop boardgame of the same name, Auroch Digital have resurrected this classic game of vehicular combat as video game.  Unlike many of the other offerings from Games Workshop, Dark Future is not set in their Warhammer universe, but a dystopian vision of America, where sanctioned operatives – militarised police forces – take on crazed gang-cults across the blighted highways of this new America.

Rather than recreating the board game experience by having a turn-based system, Auroch Digital have distilled the essence of the original board game into their adaptation.  Dark Future: Blood Red States offers a real-time simulation of tactical car combat. 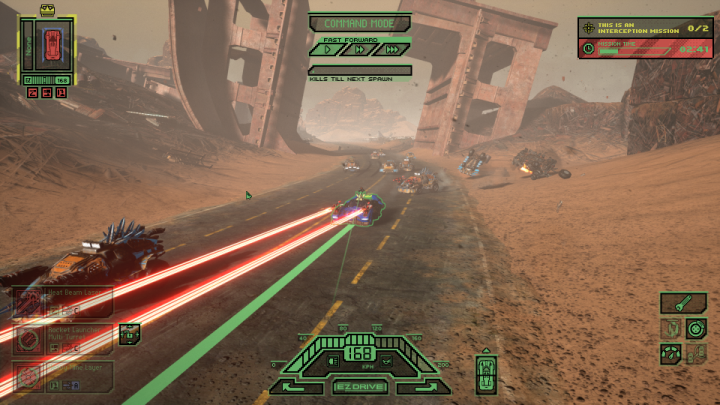 This real-time element allows Dark Future: Blood Red States to become a far more dynamic experience, as each car’s relative position to each other are a constantly changing variable, forcing players to constantly revise their strategies.  That said, movement is constrained by the cars remaining within the four lanes of highway, barring the occasional moments when a car is forced off-road.  This narrowing of focus makes for a tighter gameplay experience, and whilst it limits some tactical options it does force players to think more creatively.

Due to the speed of the cars, orders can be given in a command mode, allowing players to slow the game down to a tenth of the original speed in order for them to issue commands.  This slowing, rather than pausing, of the game adds a frisson of tension as players can find themselves frantically ordering manoeuvres before the moment passes.

The game can be broken down into two halves, with the first being the core tactical car combat and the other being resource management, between each mission.  This latter element allows players to invest in upgrades, refuel the car and hire operatives to join you on missions, as well as choosing missions.

However, it is these missions that form the bulk of the game, which has the player’s interceptor cruising through the blighted landscape of America.  These landscapes are refreshingly varied, from bridge-mounted motorways to routes through narrow canyons.  Along with this are a variety of weather effects that affect visibility. 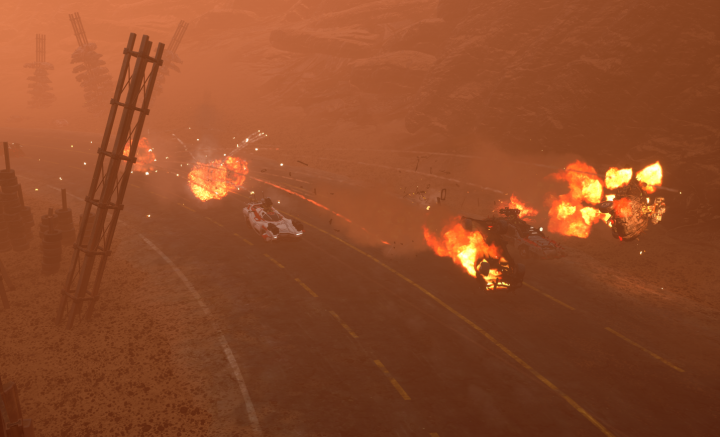 The types of missions on offer are limited by the scope of the game, but vary from objective-based missions, such as escort and blockade runs, to pure combat missions.  Each of these missions form part of an ongoing career for a variety of sanction operatives, which the players can choose from.  The overall narrative progresses through a series of z-mails (email to you and I), which is where the humour shines through.

As much as Dark Future: Blood Red States is dystopian, it is a vision is based on eighties paranoia.  This retro-futuristic feel permeates the entire game, with the menus and loading screens rendered in the style of 80’s 8-bit graphics.

Dark Future: Blood Red States is not a game that players could continuously play, as there is a danger that the tight focus of the gameplay can become monotonous.  That said, what Dark Future: Blood Red States does, namely tactical car combat, it does really well.  The game’s playability is extended with the introduction of new perks and equipment as the players progress, as well as some missions having so-called “mutators”, where specific attacks can do more damage.

Dark Future: Blood Red States is ideally played as a game that players dip in and out of, or as a short break.  With each mission lasting no longer than ten minutes, this makes them a compact experience that does not overstay its welcome.