previous
5G - Should we? Shouldn't we?
random
next
Phoenix Point – one year on
Video Games & Tech
2 likes

+ Fast paced combat
+ Smooth gameplay locked at a solid 30 fps
+ Variety of enemies to tackle in a plethora of settings
+ Rewarding selection of unlockables and easter eggs
+ Weapon mods allow for variation in combat
+ I could listen to that soundtrack all day...

Doom Eternal is a fantastic successor to its predecessor, and Panic Button have done a fantastic job to port it over to Nintendo Switch. There's plenty of plot to engage with, and more than enough demons to slay, so I can definitely say that if you're looking for some action on the go and have yet to experience this because you only have a Nintendo Switch, Doom Eternal is your weapon of choice.

PRELUDE TO THE ONSLAUGHT

Doom Eternal was released for consoles back in March, but it wasn’t until the 30th of November that it was confirmed that the Nintendo Switch owners would get to add the further adventures of the Doom Slayer on the 8th of December. This announcement was also accompanied by the news that the developers had decided that game would only be available digitally, available through the Nintendo eShop as well as through digital codes available from retailers.

Now, going into this I knew from experience that the team responsible for fitting the gloriously glory experience onto the handheld – Panic Button – were no strangers to porting big titles to the Nintendo Switch. They were responsible for handling the Doom 2016 game to the console, and from then on had a healthy relationship with Bethesda bringing over the Wolfenstein II titles as well as Doom 3: BFG Edition. 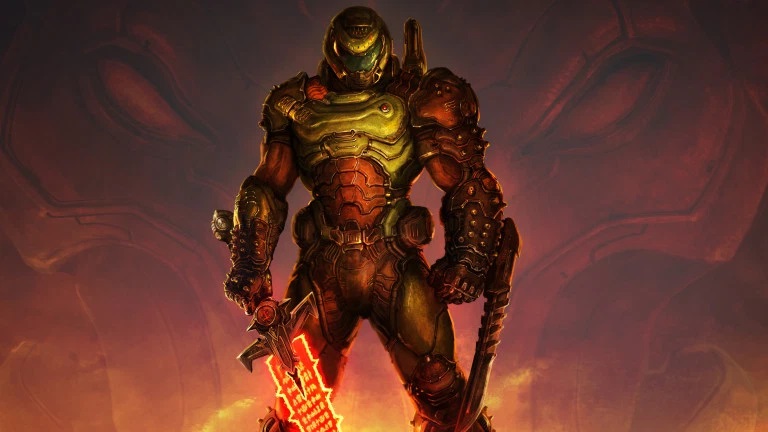 THE STORY: ONE MAN’S CRUSADE AGAINS THE SWARMS OF HELL

Now, when you think of the Doom series, plot isn’t exactly the first thing that comes to mind. Hell, one of the iconic scenes in Doom 2016 is when the Slayer is starts receiving exposition at the start of the game after donning their iconic armour…and before Samuel Hayden can take his first breath after introducing himself, the Slayer pushes away the communicating screen in front of him to make his way to the nearest door so he can start ripping and tearing through the hordes of demonic entities which have taken over the base.

Doom Slayer has no time for plot. He cares only to rip and tear until it is done.

However, Doom Eternal is surprisingly plot-heavy considering the game that came before it. Immediately, you are dropped into a worst-case scenario; Earth has lost and demonic forces have taken over the planet, scarring the very face of the Earth with runes embedded into the very surface. The Slayer is momentarily resting above the carnage in his own station, establishing coordinates and gearing up before embodying the principle of ‘push forward combat’ id Software associate with the series by throwing himself into a citadel to take on wave after wave of enemy before finally tearing off the head of someone in a crown who you gather was someone pretty important.

“There is only one dominant life form in this universe and it carries a steel-barrelled sword of vengeance.”

All explanations for what on Earth is going on can be found in the collectible codex entries scattered around the levels, and bursts of ARC Broadcasts can be heard to give you an idea of just how damned humanity is. However, there’s enough given in the story taking place around you to fill out enough the gaps to get a grasp on what exactly is going on. The cutscenes seem remarkably slow-paced considering the fast, action driven gameplay that Doom is known for. The codex entries thankfully give a wealth of lore for you to dig into whilst you explore your personal command centre in-between levels, which itself has a wealth of lore and easter eggs of its own for you to unlock and discover as you plan your next move. Will you revisit a level to unlock more secrets, or plough ahead into the next chapter of this epic? Will you experiment with that new weapon you just discovered, or will you show off that new shiny armour you unlocked?

This Doom Slayer still has no time for plot, but that still doesn’t stand in the way of this chronicle id Software appear to have scripted for this entry. 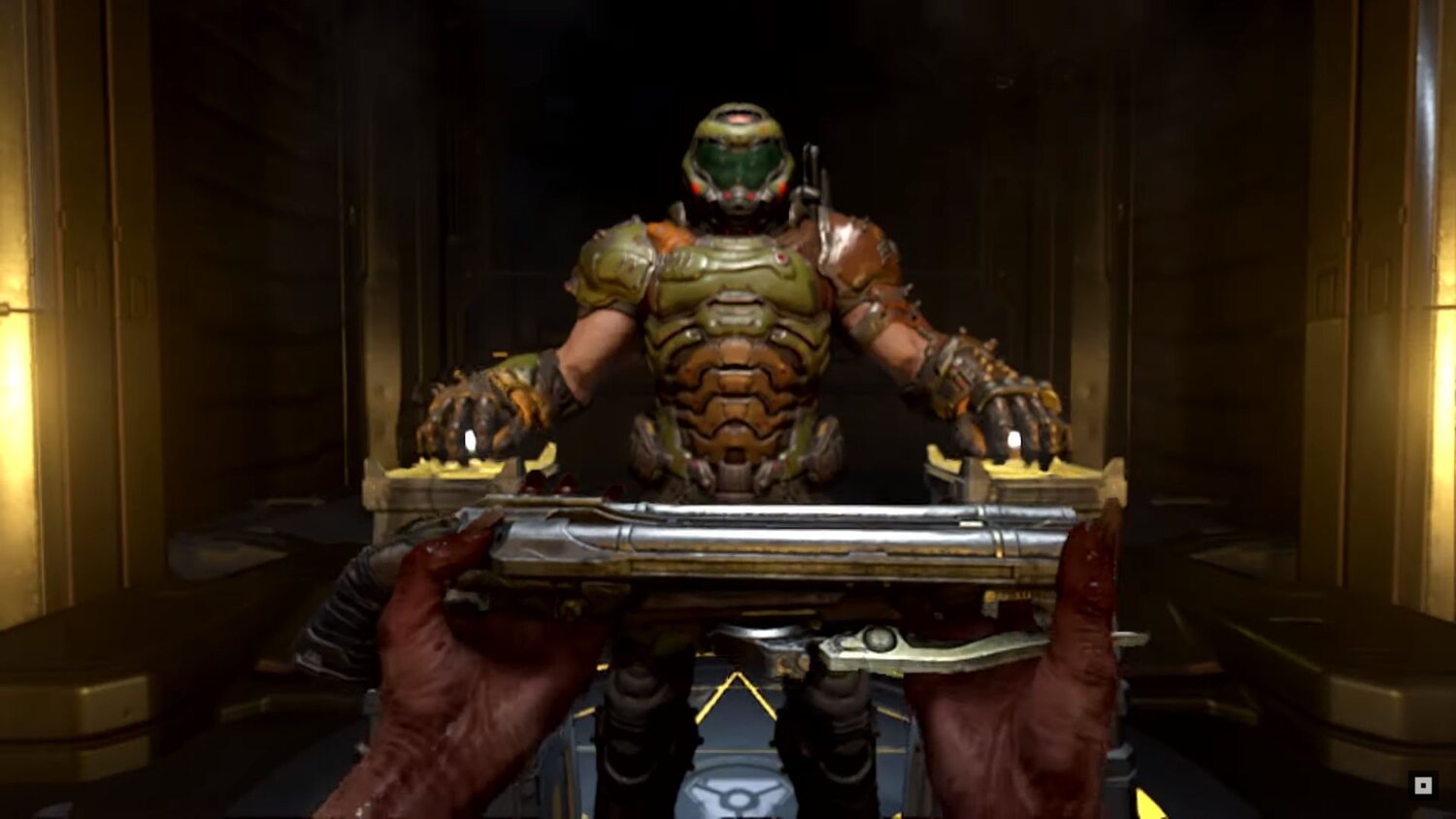 GAMEPLAY: ONE HELL OF A GOOD TIME

Like I mentioned before, the principle to the id Software entries to the Doom franchise have revolved around ‘push forward combat’. Despite the renewed emphasis on telling a dimension-spanning story which takes you from ruined hellscapes to abandoned citadels, mechanised factories to celestial establishments, you can still be damned sure that at the heart of it all is going to be the adrenaline-fuelled combat that the series is known for.

You start your crusade against the demonic tide with your trusty Combat Shotgun, and as you delve into the depths of the campaign you uncover a plethora of new and familiar items to add to your arsenal. Each new addition provides a new way to rip and teat through the stages and various combat arenas scattered throughout the levels, and ammo can be found scattering the ground or by running a chainsaw through lesser demons. Glory Kills are a returning feature, allowing you to finish off minions in almost darkly comedic manners – never have I felt such satisfaction from bopping a demonic mook so hard on the head it moves down to where the lungs should be. A new addition is shoulder mounted weaponry, allowing you to add a grenade launcher, to take care of groups of inconveniences, or the Flame Belch, which you’re encouraged to unload on groups of demons to spew out armour for you. 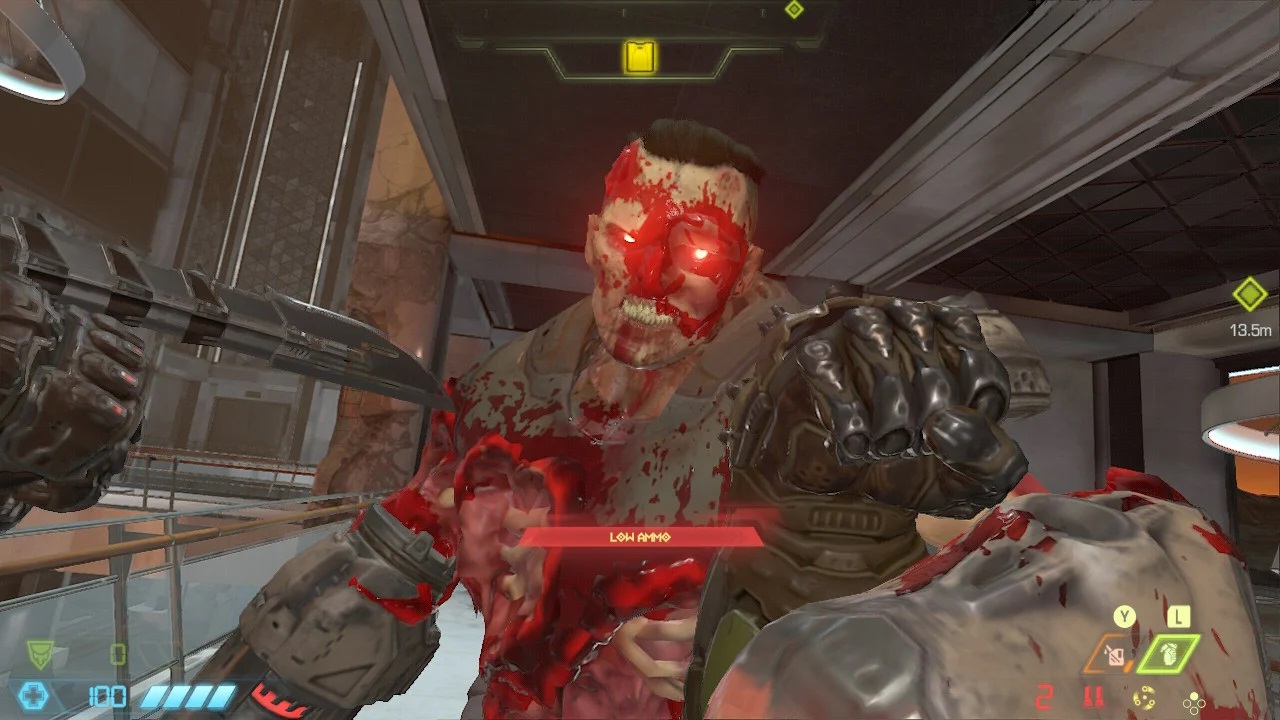 Weapons are also provided with modifications which can be upgraded as you proceed through the campaign. Do you prefer your shotgun to come with a cache of sticky bombs, or have the ability to run through your supply of ammunition without pausing to reload? Do you want your machine gun to come equipped with a sniper scope for precise shots, or unload a barrage of micro-missiles to stagger demon groups? It all depends on your playstyle, and how you want to tackle the variety of demons that stand in your way.

To help space out the collectibles and the gameplay, there are a fair few areas which contain elements of platforming to make the world feel expansive an this can be both a benefit and a hinderance to players. By giving you mobility through horizontal bars you can leap from, as well as a double jump and chargeable dash for manoeuvrability, the environments are now rife with opportunities for secrets to be hidden in every corner of the map. However getting these secrets can be slightly frustrating, especially if you are sure that you’re just simply missing the timing of a vital manoeuvre over a chasm and not missing an important step.

Additionally, a little to it’s detriment, the Nintendo Switch is not built for such a reliance of pressing in the Right Stick (R3) for those critical Glory Kills or Wall Clambering. It was suggested that I might find it easier on a Switch Pro Controller, but if you’re without you may find yourself frustrated as your thumb mis-hits the stick and you’re sent spiralling down into the flaming pit for the third time.

It should be noted that much like other Doom games you can link your experiences to your Bethesda.net account. Whilst it thankfully isn’t mandatory (like it was until a patch came in for Doom, Doom II and Doom III), it does open up the opportunity for customising your home screen experience.  They have weekly challenges to encourage replayability, allowing you to unlock more and more small pieces of content to decorate your avatar and Doom Eternal homescreen. Whilst it may seem a little inconvenient, it’s nice to note that the interaction here isn’t locked behind a Nintendo Online subscription.

THE PERFORMANCE: A REAL DEAL WITH THE DEVIL

To my mind, what has been achieved joins the port of The Witcher 3 in standing as a testament to the sheer technological wizardry which must be undertaken to fit such ambitious third-party games onto such a compact piece of hardware.

Playing through the opening of Doom Eternal on the Switch is a smooth experience, with the framerate locked at 30 frames per second, making use of much lower graphical settings and dynamic 720p resolution scaling. Locking the game to 30 fps does help tremendously as there’s no chugging and stuttering as you traverse through the levels, and the loading screens are noticeably faster than the port of its predecessor. As you wade your way through hell and tear through the various environments, you can see the damage your weapons do to the demonic forces that stand in your way – every shotgun blast which takes out a chunks out of a Zombie, every spray of gore as you slice through an Imp with a chainsaw, you still see every moment as they reel from the impact.

However, you can’t gush about how smoothly it runs and not talk about how it looks. Some of the scenic views look downright awe-inspiring (from the distant colossal figures you will never interact with, their dead corpses part of the environment, to the Titans actively lumbering through the destroyed cities as you scurry beneath their notice)…but there are times when you look a little too closely, and notice that it definitely looks a little rougher around the edges. It is a significant downgrade from the PC, PS4 and Xbox One versions, and very noticable once you stand still and examine the environment around you. That being said, it is still one of the smoothest games I have played in a very long while, and the ‘push forward combat’ principle actually goes a long way to disguise this graphical change. As you find yourself constantly on the move to avoid incoming fire, moving fluidly from one enemy to the next as you empty your ammo supplies, you don’t really pay attention to how many polygons are on the screen.

Plus, with the heavy metal from Mick Gordon and Chad Mossholder for blood-pumping soundtrack that puts you in exactly the right mood to rip and tear everything in front of you, you don’t exactly want to stop to analyse every little thing.

Doom Eternal is a fantastic addition to the Switch’s library, and at 18 GB it isn’t exactly a huge drain on your Switch’s memory banks either. Whilst I do prefer my collections to be physical, I have no qualms in having this particular bad boy sitting in my digital library. If you haven’t purchased a copy already and only own a Switch, I thoroughly recommend giving this latest instalment a go. With The Ancient Gods DLC still to come, and tons of multiplayer action to keep you entertained outside of the main campaign, there’s a lot more slaying to be had on the horizon…