Final Fantasy has always been, for me, the leader in the JRPG crowd. Maybe not at the forefront of innovation, but in terms of story, characters, environment, and especially the music, it has remained at the top. With each iteration they build on the strengths of the previous game, whilst looking at what failures the title had and, in theory, finding a remedy for it. Some would look at the difference in Final Fantasy XIII and XIII-2 as a prime example of this; XIII was infamous for it’s corridor-esque areas (something that I didn’t mind at all – see my previous article here) and, following the ensuing backlash, XIII-2 had a larger, open-world feel throughout the game, especially considering the different time periods. Whilst this is a good example indeed, I believe the perfect example would be Final Fantasy XIV. 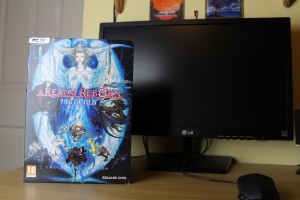 FFXIV Collectors Edition Box, in comparison to my 21.5 inch monitor

Having launched back in 2010, it was immediately met with widely negative reviews, citing the UI and gameplay as relatively broken and a chore to use. The game was constantly being patched throughout it’s initial release months, but not enough work could be done whilst the servers were still in constant use, realising the scope of repairs that needed to be undertaken far exceeded what they first thought. They announced that the servers would be closed whilst they built the game up from scratch; a game we would later call Final Fantasy XIV: A Realm Reborn, or 2.0. 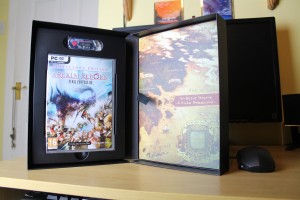 The Game, Authenticator and Art Book on Display

Whilst this quick overview doesn’t immediately relate to the Collectors Edition, bear with me. When most Developers would have left the initial product as the be all and end all, Square-Enix refused this iteration of the widely popular series to bring negative views to the franchise as a whole, so they spent an extra two years polishing the game, widely reworking all mechanics, including gameplay, graphics engine and the UI. With the copious amounts of extra money needed to fund this development, and with the state of Square-Enix at the time, this was truly a make-or-break situation for the Japanese Giant. So, upon months of Alpha and Beta testing, and incredibly positive hands-on sessions, the company announced the game’s release date, followed by two editions: The Standard Edition, containing the game and 30days game time, and the Collectors Edition, a love letter to the community that stood by the company and wanted to fully experience the fruits of their labour. 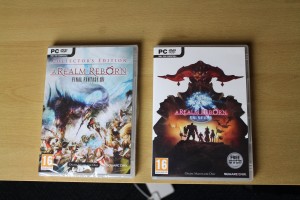 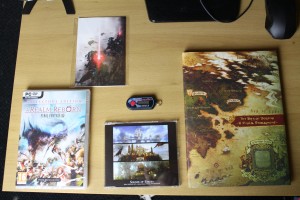