Straight to the Point – This kickstarter success story is a superb yet simple roguelike game with its intense tactical combat and random adventures making it well worth its remarkably cheap price of seven pounds.

Crewman Christoff is dead, cornered in a corridor by the gunnery room and torn to pieces by two Mantis warriors who are now one flimsy bulkhead away from my precious O2 generators. Their rampage has started a fire which is now spreading out of control through the engine room while the Mantis cruiser which beamed these two monstrosities aboard readies its beam cannons to fire upon my vessel.

Things do not look good, either the Mantis will kill my remaining crew; the ship will be blown to bits, the ship will burn up from the inside or everyone will die from asphyxiation due to lack of oxygen.

It’s the Mantis cruiser which gets me in the end, its beam cannons breaking down my shields and removing the last few hull points of my ship which slowly breaks apart as the last members of my crew die from decompression.

This is not an unusual description of one of my many play throughs of FTL: Faster than light, a fiendishly difficult yet addictive game which I best describe as a Crisis Management sim in space.

Your mission is straightforward; as the captain of a Federation starship you must travel, or more accurately flee as fast as possible from a Rebel fleet, across the galaxy to deliver crucial intelligence to your commanders. The game itself is fairly light on narrative story, instead relying on the random encounters you have along the way to make its own storyline for you.

The game is short and focused, each journey will not probably last more than an hour at a time. However with ‘Permadeath’ at the core of the game, if you die its game over and because you can’t save the game at any point, each battle takes on a sense of urgency and desperation that extends its appeal. This is quite a refreshing change compared to the usual hand holding of many games as one mistake could mean the loss of a vital crew member or even your entire ship but when you successfully bring it back from the brink of defeat the feeling is euphoric. 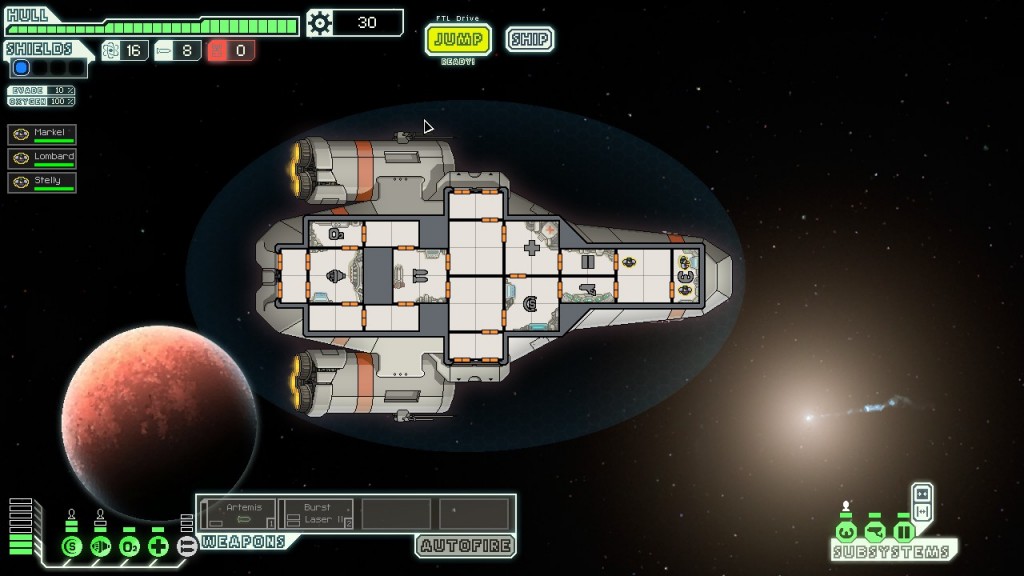 Your ship is viewed from a top-down 2D perspective, you begin only with the most basic of vessels but multiple new ship types can be unlocked by completing missions in game, each with their own strengths and weaknesses. You start with three crew members but more can be recruited from the various galactic races but expect to lose some to random events or enemy action. These crew members can be selected and ordered to work in the specific rooms where your four primary systems (weapons, shields, engines and thrusters) are housed or repair damage/repel borders as a battle develops so the crew quickly take shape with each fulfilling the roles of a classic science fiction star ship such as pilot, gunnery officer, chief engineer or security officer.

To traverse the galaxy you must journey along a branching path of nine different systems, when you enter a system you must travel from one side to another via a series of randomly generated jump beacons which normally have some kind of encounter awaiting you. These encounters vary from saving space stations under attack, exploring deserted colonies and battles with any number of rebels, pirates or slavers. 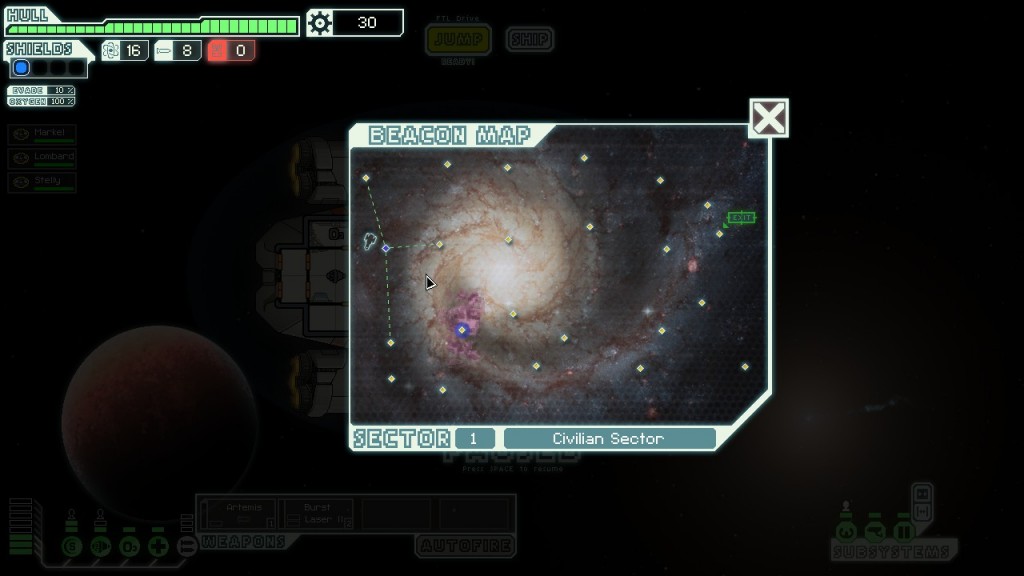 After each encounter you may receive rewards, this takes the form of fuel which is used for each FTL jump and running out of fuel is always an ongoing concern, missiles which are useful for some of the more powerful weaponry in the game or ‘scrap’ which is the games currency that can be used either to upgrade your ship or to purchase items, crew or weapons from vendors you meet along your travels.

Obviously travelling to as many encounters as possible nets you more rewards, however the rebel fleet are always in pursuit, represented by an expanding red line within each sector which if it catches up with you means a difficult and often fatal fight against a vastly superior rebel ship. It presents an intriguing risk versus reward element as there is not enough time to explore every system and find every encounter so it pays to plan ahead. Taking a risk and finding that hidden supply cache in a far flung corner of the system is incredibly rewarding although it can go the other way and leave you stranded to be blown to oblivion by the pursuing rebels.