[box_light]After another runaway success with Borderlands 2, Gearbox manages keep up the form with its first portion of additional content.[/box_light] 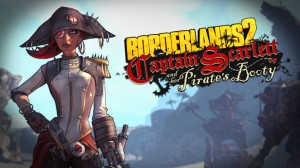 Captain Scarlett and Her Pirate’s Booty

I have been playing a lot of Borderlands 2 recently. A whole lot. After investing so much time into the deliciously crazy world of Pandora, I would have been more excited than Face McShooty anticipating a shotgun to the head at the chance of spending more time there. And all of a sudden, Gearbox announces and releases it’s first piece of DLC in the same week. This first portion is a good old fashioned chunk of pirate themed goodness, revolving around lost treasure, and the nefarious Captain Scarlett’s quest to find it. It introduces a brand new location, the desert of Oasis, new vehicles, characters, quests and more.

Now, I’ll get the bad news out of the way first. The main campaign is nothing really to write home about. The main story is fairly short, and pretty much involves searching for parts of a key to open the secret vault of Captain Blade’s treasure, and that’s about it. It is a fairly linear line of 10 or so quests, with a simple format of go here-do this, receive key item, rinse and repeat. Whereas this may be perfectly fine for any other RPG or adventure game plot, this is Borderlands; a series renowned for its superb writing, unique quests and outlandish characters, and unfortunately, I found the main story quite linear and uninspired, compared to previous form. Fortunately however, the main quest line is only one side of the coin. 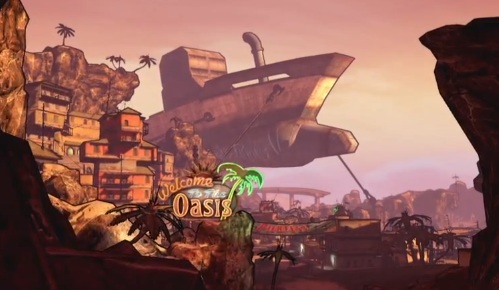 In most other areas of the content, the same high standards had thankfully been kept; and in terms of characterisation there are some brilliant new faces to run into. While the Pirate Captain Scarlett herself was passable as an obviously untrustworthy yet necessary companion, there are still other genuinely entertaining characters. My favourite being Shade, the last living resident of Oasis itself; who has clearly gone insane after his entire town died and turned into an arid desert, and so has rigged dead bodies with cassette recorders and megaphones all around the town and acts out their personalities.

Similarly, whereas the main questline may be quite generic, this is thankfully not the case with the side quests, which once again show that not all sidequests have to be filler and that they can be plenty of entertainment in their own right. Sure, there will always be a few “kill 10 these, pick up 10 of that” quests, but even the writing for these is comedic, and gives you motivation to complete them. For example, one such quest asks you to go and collect some fruit for a character, however the reason being; “Scurvy is caused by vitamin C deficiency. You can counteract it by drinking orange juice every so often. Don’t say video games never taught you anything”. A fantastic piece of writing that somehow manages to break the 4th wall, and keep within he pirate theme of the game at the same time. 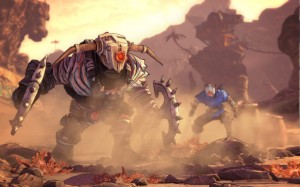 Speaking of the theme, Oasis itself is fairly large, so again, even though the main story is fairly short there will still be plenty to keep you occupied. However, it is yet again set in a barren wasteland, and it is beginning to get ever so slightly boring. Sure, Pandora is meant to be a harsh environment, but we have already seen in the main game that there are oceans on Pandora, and plenty of other environments, was it too much to ask to set it somewhere unique, rather than the same old dusty, dry desert we have seen in two main games and plenty of DLC? Perhaps Gearbox was trying to avoid more stereotypical piratical themed settings, but it didn’t really work for me.

Nonetheless, there are plenty of landmarks to keep you busy, from giant ship-graveyards, to dried up oil rigs and pirate villages, there is still plenty to explore and lots to see. To help you in your travels, early on in the game you are given your very own sand skiff to sail the seven dried up seas, which was very enjoyable to use. Despite its lack of speed, there’s nothing quite like sailing in a boat-shaped hovercraft, firing volleys of rockets at other pirate ships in the middle of a sea of sand. Gearbox could have just re used the existing vehicle options from the main campaign, but it is a fun way to get around, and it’s addition is a great mark of commitment by Gearbox, and gives players a bit more value for their money.

Going along with this is the introduction of “Seraph” weapons, a new weapons class intended to be a bridge between blue and orange quality weapons in the game. However, they are mainly post-game content, requiring the defeat of a powerful post-game raid boss to start collecting the Seraph Crystals needed to buy them, so if you are soloing, don’t expect to see any Seraph weapons any time soon.

Captain Scarlett And Her Pirate’s Booty is a worthy purchase, a piece of additional content that gives plenty of value for money, and enjoys more of the quality writing and characterization the series is renowned for,  just held back slightly by a mediocre main plot and all-too familiar landscape.