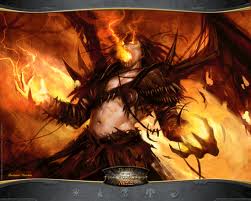 I look forward to the annual iteration of this game. Many of us end up moving from place to place throughout the course of our studies, careers, and life transitions. We often leave friends and gaming groups behind. My group of friends were avid Magic players when the first version of Duel of the Planeswalkers was released. Through Xbox Live we were able to keep in touch and maintain the feeling of playing games around the dinner table. None of us were MTG pros. We played Magic as a social activity where not a little bit of intoxication was involved.

Stainless Games has always attempted to capture the essence of the casual Magic play experience. I feel DotP is distinct from the Magic Online experience in this way. It’s a game for new and casual Magic players to have a good time. The community surrounding the game has consistently suggested improvements and the developers have listened. I have played every edition of this game and this is certainly the best one.

I think it’s really all about the little things. Simple and elegant changes have significantly improved the play experience. Including a graveyard count being one of my favorites. Some conditions require this knowledge and the slightly annoying activity of counting each of the cards in an opponents graveyard interrupts the gameplay. The ‘attack with all’ option during combat is extremely convenient. Even if you want to attack with n-x creatures it’s still a great feature. You simply click on the creatures you want to stay at your wizard’s tower and let the rest march off to victory.

The deck editor has also been revamped and with great effect. Being able to tailor the exact amount of land while preserving the choice for an automatic 40% breakdown is really nice. So if you wanted to keep only one- and two-drops and seriously reduce your land, that can be done now. One of the few gripes I have is the 60 card minimum. I think a 40 card minimum would be in order but I suppose they are saving something for 2015. I’d also like to see a common pool of cards between all decks so that you can design your own deck from scratch (though that might be asking too much). 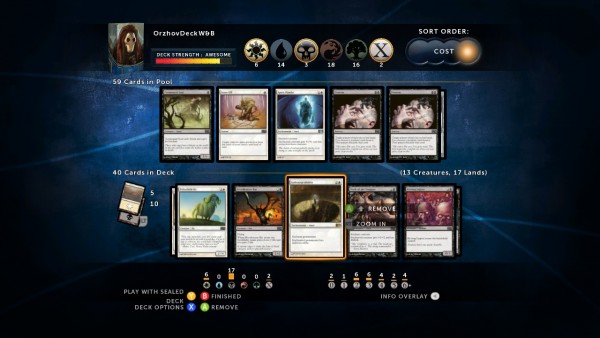 A new addition is the sealed deck format. It’s a great introduction to limited-play for new Magic players. However, it is only an introduction unless you want to hand over some cash for new packs. The campaign section is really great and will introduce new players to some of Magic’s most loved blocks. The design of each block-level teaches magic strategy without being condescending. In fact, one part of the game that most impressed me was the quality of the tutorial. It really does a wonderful job of teaching Magic to noobs with a very clear, concise voice over. I would also recommend working through the challenges to a new player especially after the basic mechanics are mastered. It’s a good exercise in the type of opportunities you need to train your eyes to see. When playing against people these are the types of strategies one would need to employ.

If you are an experienced Magic player, then you will likely find these challenges to be beyond easy. I would have to say these were some of the easiest challenges in the series so far.

Another small improvement is the AI option for 2HG and the random deck select. Sometimes you just want to play a pick-up and don’t care much for the deck. Especially if you’re a completionist like me and you have to unlock all the cards (without buying unlocks). I haven’t played too much PvP but when I did things seemed to run very smoothly. It should also be noted that my experience is with the Steam version of the game and not the XBL version. Below are some preliminary strategy suggestions for playing Magic: DotP 2014.

One of the best encounters to grind on is Skirsdag Cultists in the Innistrad block. There’s virtually an answer to every kind of threat for each of the decks. All you need to do is get an opening hand with a creature answer and hold on to it to take care of the demon creature. After that, all you have to deal with are 1/1s. You can grind for card unlocks, personas, titles, and achievements. I would recommend that you not play through the entire game with one deck until you unlock the personas that relate to favourite colour.

I figured out that the favourite colour data is determined by the number of spells you cast of that colour. If you play with only one colour then you’ll be stuck playing the other colours for a longer time before you can get them favourited. So once you get one colour favourited, move on to the next.

One of the best decks overall is the white weenie soldier-ball. It’s fast, reliable, and solidly performs in all of the formats available. A really fun deck is the Sliver deck. This might just be a matter of pure nostalgia for me (I’ve been playing since Revised). I haven’t unlocked all the cards for it yet but it’s going to be interesting to see what other decks will foat up my favourites list. 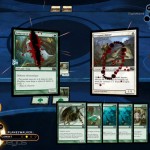 I did notice that most/all of the decks were very creature heavy. This requires the preservation of mana-ramps during deck-editing so be mindful of that. In multi-coloured decks there are no dual or multi-lands – there are tutor-lands, however. I’m guessing there’s something difficult on the game design side of including these lands. You do get to choose which combination of lands you tap when you play spells though. Also, the default is always to allow you to play the maximum number of spells in your hand.

All in all, I really enjoyed the game and I’m still enjoying it. The pricing is a steal for any version you get. Stainless has really succeeded in pulling out another solid iteration of this game. Their commitment to the fanbase is praiseworthy and the fruits of the forum discussions really show in the finished product. If you are a brand noob looking to get into MTG or a seasoned Timmy , then I would strongly recommend Magic: Duel of the Planeswalkers 2014 to you.