Great use of hand-drawn animation, an interesting story and a game which isn't afraid to poke fun at itself.

If we can be thankful to touch screen mobile devices for anything, besides providing a great way to avoid uncomfortable silences in social situations, then one of those things will be the return of the point and click adventure to mainstream video games.

The iPhone has joined digital platforms like Xbox Live Arcade in allowing a new generation to experience a genre which many older players hold dear to their hearts but some parts of the industry thought was dead forever. Memoria isn’t a mobile game but it is a game which helps to represent an emerging renaissance. A triple-A quality title with first class visuals to boot. 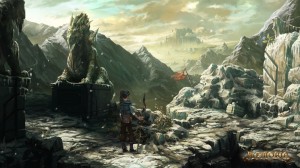 Memoria is based  in the world of The Dark Eye, an highly popular German role playing game which has previously been adapted into several Fantasy RPG’s and adventure titles for the PC as well as the forthcoming The Dark Eye: Demonicon for the PS3 and Xbox 360.

The story follows a young thief named Geron who needs to awaken an ancient power to release his girlfriend Nuri of a cruel curse which transformed her into a crow. The key to this power lies within a cryptic riddle and the experiences of Sadja, a princess-turned-warrior from a far removed and disgraced royal family.  The plot plays out through a series of events and flashbacks and players assume control of several of the game’s characters during the 7-10 hour adventure.

The first thing you are likely to notice about Memoria is that the animation on display here is nothing short of phenomenal. The almost entirely hand drawn art uses a combination of cell shading and pastel effects to create some truly gorgeous scenes, many of which are a sight to behold. The mountainous vistas and forests have real discernible depth whilst the characters and lighting act as a reminder of just how good 2D animation can be.

The unfortunate side effect of this is that Memoria’s system requirements are uncharacteristically high. The high quality visuals make this an experience best enjoyed at high resolutions and with the effect slider ramped up to the top but doing so is likely to degrade performance to nearly unplayable levels on anything lower than a mid-range gaming rig.

During our testing, the game didn’t trouble an AMD FX powered system with a 2GB Radeon HD 7870 card but did slow to a crawl on an i3 laptop with 512MB dedicated graphics when running on anything above the lowest presets. Developers Daedalic Studios have used the popular Visionaire engine to it’s full potential but in doing so may have restricted their audience only to those with a good enough PC. 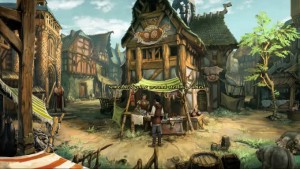 Unfortunately most of Memoria’s dialogue is slightly bland and forgettable

Garon and Sadja’s stories are interesting and although the game remains the standard point and click scripted fare, it is easy to become emotionally involved and feel the plight of the lead characters, especially Nuri who easily exhibits the best voice acting talent featured here. Whilst acceptable, much of the other voice acting is not without it’s faults and the dialogue can occasionally come across as wooden, although never to  a degree where it stars to heavily impede any enjoyment of the game.

The most serious problem with the narrative is that none of the dialogue or writing is particularly memorable. For a title developed within an existing and popular franchise, Memoria is impressively self-referential. Occasional jokes are made towards gaming culture and one of the Steam achievements in particular is likely to raise a smile. However none of the characters exhibit the kind of charisma that fans of Monkey Island’s Guybush Threepwood or Broken Sword’s George Stobbart have come to cherish throughout the years.

For such a streamlined and focused title, Memoria’s puzzles design also leaves much to be desired. A lot of the puzzles are slightly obscure in nature and it’s likely that only the most hardened of puzzle fans will get through the entire story without resorting to Google at least once. There are also several sections where the story seems to lose all pacing and the forward path is non-obvious although clues and the ability to skip certain sections are offered if the player appears to be stuck in one section for an extended length of time.

At £16.99 from Steam or £15.49 from the Mac App Store in the UK, Memoria isn’t particularly cheap and the questionable quality of the writing and voice acting limits replayability and any nostalgic appeal. However, despite a few narrative problems, the awe inspiring visuals and solid sense of style are enough to make this a game worthy of attention. Memoria is proof that, at least in terms of visuals, point and click has come on a long way since Grim Fandango and The Day of the Tentacle. It is now hopefully just a case of patiently waiting for the writing to catch up.