Borderlands 2’s second round of DLC was just as much of a surprise announcement as the first, but is quality beginning to be sacrificed for speedy releases?

As any newbie Vault Hunter knows, Pandora is all about the guns. No game since the first Borderlands has put so much life and downright…personality into their game’s weapons. And no more is this seen than in Gearbox’s second round of DLC for Borderlands 2; Mr Torgue’s Campaign of Carnage. Featuring the titular Mr Torgue, CEO of his namesake company, one glance at this huge, muscled, mullet-wearing wall of pure testosterone and CAPITAL LETTERS, anyone can clearly see why Torgue weapons are the BIGGEST, the LOUDEST and the most downright EXPLODERY weapons on Pandora. With this new DLC, Vault hunters can travel to Torgue’s “Badass Crater of Badassitude” and it’s surrounding locations, to take part in a gladiator-style competition to become the “number one ranked badass on Pandora”, and win the right to open a newly found vault in the crater itself. Also included in the DLC are replayable arena-style battles and races, which can be played to earn “Torgue Tokens”, specialised currency that can be used to purchase Torgue weapons from specialized vending machines. And yes, they can even be used to purchase legendaries. 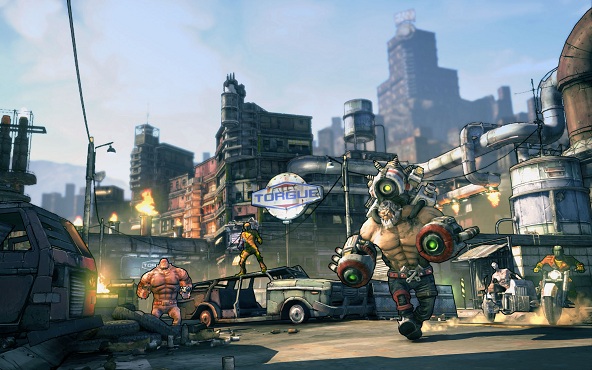 In terms of actual content; the DLC itself is of a similar length to Captain Scarlett, though if possible, I found the main story to be even more linear, which for anyone who read the review for Captain Scarlett, will know was a big disappointment. There is still plenty of entertainment to be had, and players will get their money’s worth, but the overall quality is not up to the usual standard. The basic format of the tournament is do something to “annoy the competition”, travel to new area to fight the competition, rise a level, and repeat five times or so, with very little surprises along the way. Even the side quests this time round are much more repetitive as well; a large portion simply involve playing exactly the same arena fights on higher difficulties to earn tokens, and it is actually fun to get stuck into a melee against lots of other bandits at the same time in an arena environment, the fights can get very intense, but they are always one round long, unlike the two arenas from the main game, so it can get repetitive and boring quickly, as the difficulty never changes drastically. Even the other quests are fairly generic compared to the usual borderlands fare; there are a lot of simple fetch quests, and even the majority of the questgivers are characters from the main game as well.

This brings me to my next point; the characters. The eponymous Mr Torgue is easily enough personality for any sane individual. Obsessed with EXPLOSIONS and TESTOSTERONE, he could quite easily feature in a Powerthirst commercial.  He consistently shouts everything at the top of his lungs; he makes random announcements over the PA system questioning player’s badassness if they aren’t “MADE OF METAL, GASOLINE OR BACON”, and seemingly does not care about trivial things like someone breaking into his arena or other competitors getting one over on him, as long as things are EXPLODING. I certainly loved listening to all the random things he shouted as I made my way through the game, and I looked forward to hearing what he was going to say next, but he is a very intense character, even more so than Tiny Tina, if such a thing is even possible, and he did begin to grate on me slightly towards the end. So if the ever-so-slightly eccentric Tina drove you crazy last time, Torgue in one place is likely to completely push you over the edge. 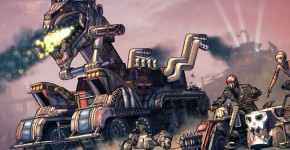 Unfortunately, as much as I loved Mr Torgue, he is by and large the only new character that is introduced. There are a few other new faces, mainly competitors in the tournament that are introduced shortly before you take care of them in an arena fight, but they are by-and-large bit parts. You do get a trainer and sponsor for your fights, which does lend a little authenticity to the gladiator style theme, as your sponsor occasionally gives you a running commentary, but these are familiar faces, and while it was pleasant to see some of my favourite characters again; a bit more originality wouldn’t have gone amiss.
As far as the environment goes, I was pleasantly surprised at the variety I was presented with. I thought it was a waste to base Captain Scarlett in the same old arid dustbowl we have seen for a long while now, especially after Gearbox seemed to take pains to make the environment in Borderlands 2 much more varied, and although Mr Torgue’s is still a little heavy on the brown, Gearbox have made a real effort to jazz up the setting. The “Badass Crater of Badassitude” serves as the central hub, and is dominated by a huge arena complete with spotlights and outlying villages, but other locations also include a race track, a whole dilapidated city and a lava-filled foundry, among others. Gearbox clearly doesn’t want to overdo it with the futuristic cities or green highlands on a planet that’s supposed to be a wasteland, which is fair enough, but they have at least made a real compromise here. 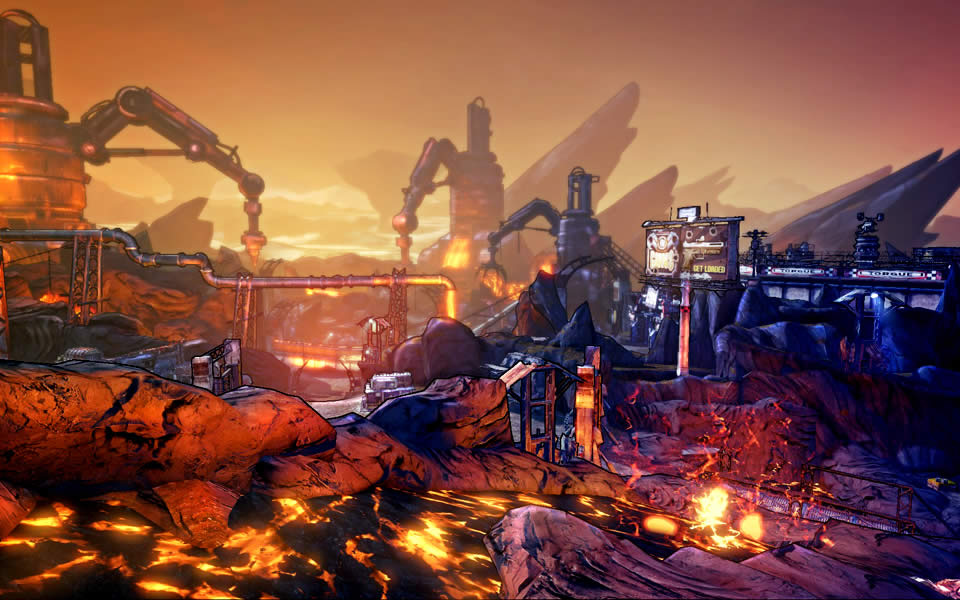 One downside that plenty of players seem to be complaining about already, however, is the lack of new vehicles to enjoy, as well. This wouldn’t be so great of a problem by itself, except that many of the new enemies actually ride tandem motorbikes that seem to have been designed perfectly for two players, so why Gearbox decided not to make this an option for players as well is anybody’s guess, and disappointing for fans who enjoyed the added bonus of sailing round in a sand-skiff in Captain Scarlett and Her Pirate’s Booty.
Mr Torgue’s Campaign of Carnage is another mixed bag, then. Mr Torgue is one of my favourite characters I have encountered in a long time. His manly, explosive and downright ridiculous writing is comedic gold, and I would happily pay good money just to listen to him more. The environment is also varied and fun to explore, some aspects of the arena gameplay are enjoyable, and being able to purchase legendary weapons will be tempting for some players. However, the latter still requires a lot of farming, and the DLC as a whole is let down by a very basic and very short main storyline. This, with the lack of any other new characters, less innovative sidequests and no new vehicles or other such treats for players, means that many players might not get their money’s worth.