OFF is a surreal indie RPG made by Mortis Ghost using RPGMaker 2003.

You control the Batter, a baseball guy on a mission to purify the world. The world is series of Zones connected by The Nothingness, which you must travel through, solving puzzles and fighting spectres.

You control the Batter on an overhead brightly coloured map. Your characters, including the Batter, level up as you progress, gaining XP in Pokemon-style turn based combat, solving block and switch puzzles and mazes, and acquiring allies to assist in battle. In contrast to the basic graphics and stark colours, there is a complex soundtrack and bizarre, philosophical dialogue. 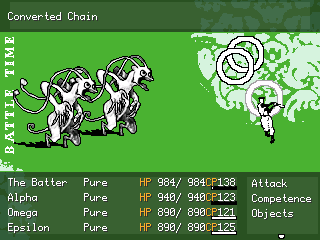 The setting is jarring and full of weirdness – the world has four elements (meat, smoke, plastic and metal) all of which are harvested and extracted in strange and sometimes disturbing ways. In Zone 1 we encounter the farms where cows are slaughtered to extract their metal, and sail down the meat canals to the meat fountains of Alma. 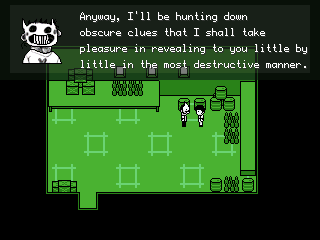 The villains are creepy, scary and sometimes sweary, and often do not seem as evil as they may have been made out! I don’t want to include any spoilers, but the Batter is often criticised in the game for his violence towards the Spectres, creatures whose nature we are not certain of at the start. The Zone 2 boss fight with Japhet proved difficult and emotional, involving me in a way I did not expect, surprising me with the depth of plot and the convincing dialogue.

With such an alien world it’s easy to feel isolated in the game, enhanced by the NPCs who speak directly to you, the player, rather than the Batter you are controlling.

The puzzles and battles increase in difficulty and I’m ashamed to admit I did resort to a walkthrough, but only as I sometimes got bored solving puzzles and losing fights when I just wanted to progress the story and learn more about the crazy world. The mechanics of the game can get repetitive, but the engaging world and intriguing plot easily outweigh this issue.

OFF is a brilliant little game, with surprising depth and plot, and is far weirder than the French-ness of its creator would account for! In a lot of ways it seems to be quite self-referential, dealing with the nature of games and including lots of little elements that subvert the expectations of the genre. Even knowing how it makes me sound I would consider this a post-modern game, and one for gamers, not for the younger kids. A big bonus for me is that it is a free homebrew game which can run fine on even my oldest laptop. Despite its simplicity this is not a quick, casual game, and even with walkthroughs provides many hours of fun.

I'm Mel, currently living in Sheffield, but originally from the other side of the Pennines. I'm a lifelong gamer, RPing from a worryingly early age, and basically raised as a geek - I don't think I ever had another option! Any spare money I have gets spent on comics, photo gear or lucha masks, and any spare time I have, when not gaming with friends, is wasted on Sims, Minecraft and trashy movies.
More Goodness
Reviews