It would be fair to say that I’m a big Ace Attorney fan. I own all five of the games which have been released in the UK. I have watched the film modelled on the first game. I have bought a DS system only to play the game I’m about to review.

This review should perhaps be viewed in that vein. Some of the things I’m about to say, I say because I have played 5 of the series’ games. I know it well. I love it.

And that’s why I was a little disappointed with Phoenix Wright: Ace Attorney –  Dual Destinies. 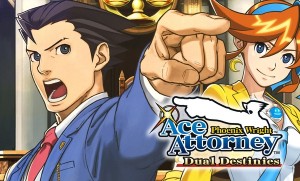 PP:AC-DD (which seems like a pharmaceutical sorting code now that I’ve typed it out) opens with the murder of a police detective killed in an explosion at the courthouse, a very dramatic opening. We find that, after the events of Apollo Justice: Ace Attorney, Phoenix has sought, and been allowed to regain, his status as an Attorney. This is immediately called into use when an innocent young friend of new Attorney Athena Cykes is accused of the bombing.

From there, more innocent people are blamed for ridiculous reasons, and alternately Phoenix, Apollo and Athena must defend them using their unique powers, whether it be the Psyche Lock, Apollo’s wristband or Athena’s ‘Analytical Psychology’, where one must point out unusual emotions in a witness’ testimony.

Aside from that new addition, the gameplay is much as in previous games. Your experience is split into two phases: an ‘Investigation’ phase where you gather evidence and a ‘Court’ phase, where you press witnesses and point out inconsistencies in their testimony. The investigations have a 3D aspect now, seeing as this is the 3DS, whereby some evidence can only be found or inspected properly at a certain angle. 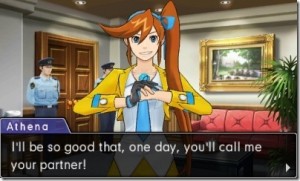 The new visuals are excellent. The character models are now 3D, and some of the backdrops are as well, which really makes the game jump from the screen. It also provides the opportunity for visual gags. The 3D also allows multiple camera angles, which lets us feel more like we’re actually in the court with Phoenix et al. In addition, many of the cut scenes are animated, which allows us to hear how ridiculously badass the Judge’s voice is. Seriously, it’s over the top for the character.

Another added feature is a sort of Attorney bullet time which comes up at the critical moment in a case. This is essentially a multiple-choice quiz about the case, but it’s presented in a pretty badass way. I like that the player is now involved in the most critical deductions of the case. This is a good step forward.

In addition, some of the writing really pops. I laughed regularly at the situations, quips and puns. Athena was interesting enough to breathe new life into the game, and her introduction allowed funny dialogue to unfold between the three Attorneys and Trucy, Phoenix’s adopted daughter, and with Detective Fulbright, the new Gumshoe stand-in.

Sadly, the game is predictable. Maybe the writers and producers knew that they would likely be hitting a new audience with the 3DS, a new generation of gamers, and so they felt they should stick with some trusted tropes. Or maybe they have just run out of ideas. But the harsh and over-the-top prosecutor, the blameless female defendants, the case from years ago which now becomes important, the limited number of suspects… all of this has been seen before. We’re investigating murders mostly, with the matters of the bombings – an opportunity for real expansion – mostly overlooked.

On top of this, the ‘kooky’ case is another pastiche on Japanese culture, which is kind of the series’ thing but is a little tired by this point. That said, the defendant in that case is one of the funniest, so perhaps I shall let it slide. 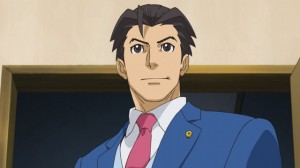 Another poor aspect of the writing is the decision to hang three of the Turnabouts on one connected case. To do this, the case needs to be really strong and interesting. But this connected case is pretty shallow and a bit dull. It doesn’t require much that hasn’t been done before in that game, let alone previous ones.

Not only that, but the gameplay is quite lacking. Much of Dual Destinies is reading, with the Attorneys and Prosecutors arguing back and forth. And whilst this makes sense – Phoenix is an Attorney with decades of experience at this point – it doesn’t make for a brilliant game. There are points where I expected the player to be involved – like rebuilding a statue, which is something we have done in prior games – but these just skipped away.

Like with many games recently, I got the feeling Dual Destinies would rather not involve the player altogether.

This feeling was enhanced by how easy Dual Destinies is. In the previous games, particularly towards the end, I’ve torn my hair out trying to work through which evidence to present. In Dual Destinies, you get more evidence, and it’s more varied, but the pertinent details are just too obvious. You can often connect everything well before the trial, something helped not only how few people are involved in each case but the decision to have opening scenes flat-out tell you who the killer is in the first two cases. It was only in the 3rd – and towards the end of the 5th – case that I really experienced any difficulty, or any real surprise at how the case unfolded.

I’d still recommend that people pick up Dual Destinies. Those who haven’t played the series before will find an interesting and amusing game available for quite cheap (it’s £20 from Nintendo’s 3DS eShop). Those who have, will find just enough in the game to enjoy it overall, but too little to really think it hits the heights of either the first game or Trials and Tribulations.