It’s not easy being a side-scrolling 2D platformer these days. Development costs are getting larger, end product retail costs are increasing and everyone understandably now expects more from their games than ever before.

Since the original Little Big Planet in 2008, Sony’s first party studios have been at the head of a campaign to prove the continuing relevance of what was becoming a dying genre. Puppeteer from Japan Studio is the latest new IP to use a combination of slick visuals, slightly unique mechanics and comedy in the hope of joining the ranks of Sackboy and Rayman. Unfortunately though, it seems like something just went wrong along the way. 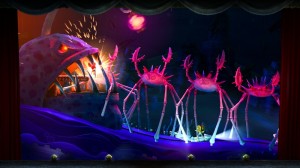 Levels take place across multiple worlds including a castle, on a pirate ship, and under the sea.

A slightly bizarre combination of Japanese game design fused with British humour and style, Puppeteer is the brainchild of Gavin Moore who is most known for his work on the Siren survival horror series and the PS2 Grand Theft Auto clone; The Getaway.

Puppeteer follows the story of Kutaro, a young boy who’s soul is kidnapped from Earth and embodied within a puppet by an evil self-imposed king of the Moon. After failing to impress the Moon Bear King, Kutaro’s head is ripped off leaving him to find substitute heads throughout the approximately 10 hour adventure.

These substitute heads take different forms and each enables different abilities as well as providing Kutaro’s life line. Kutaro’s head will fly off in the event of an enemy attack, leaving him with no choice but to pursue it across the screen. A small number of heads can be stacked up in reserve but becoming completely headless means losing a life.

If a lot of that sounds like it could be a bit dark for an ‘E for Everyone’ family adventure then that’s because it probably is. Aside from retrieving his head so that he can return to Earth, Kutaro is duty bound with freeing the souls of other kidnapped children enslaved by the Moon Bear King and ending the furry bastard’s reign of terror once and for all.

Japan Studio do a fantastic job at restoring the Disney effect through some innovative and incredible use of art direction that cannot fail to impress when seeing the game for the first time. The entire story takes place on a theatrical stage and the characters and scenery are drawn with a paper effect in some of the most original video game artwork since Okami.

Just as in a real theatre, curtains rise and fall and some fantastic use of lighting along with jeers and gasps from the virtual audience add to the effect.  The characters will address the audience as the game proceeds and can fly off the stage towards the screen in scenes that can be especially dazzling if you’re one of the few people with a Stereoscopic 3D TV. 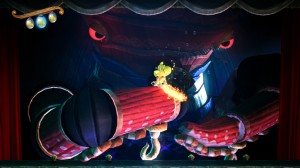 The theatre and paper setting also allow Kutaro to travel vertically and diagonally by cutting through parts of the scenery after he discovers a pair of magical scissors early in the story.

The right analogue stick controls a companion reminiscent of Zelda’s Navi that can be used to unveil hidden parts of a level or solve puzzles. Additional powers are earned as the game progresses such as bombs and hooks that are also used to interact with the stage or destroy one of the bosses that conveniently show up at the end of each stage.

It’s this familiarity that is Puppeteer’s biggest problem. Proceed through a level, collect some new heads, win a boss fight, learn a new skill and repeat. That remains the formula throughout the entire campaign and it doesn’t take long for it to become tiresome. New heads and power ups are useful for a very brief period before moving on to the next one and the whole story just feels like one long chore.

The humor on which the game seems to pride itself also isn’t anything particularly special. It’s all very British and the pantomime motif is appealing at first but cutscenes soon become long and dull and the constant narration can start to grate to the point where you just don’t want to hear it any longer.

The occasional pop culture references to the likes of The Wizard of Oz and Resident Evil can raise a smile as can some of the more tongue-in-cheek characters such as a King Triton who just can’t stop eating his aquatic subjects but these become lost in a mass of what is just mostly inane nonsense. 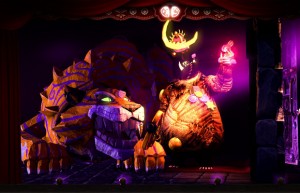 Despite it’s flaws, Puppeteer is still one of the best looking exclusives on the PS3 and with full 3D TV support.

It doesn’t help that the game is almost frustratingly difficult in parts. The controls are nowhere near as simple and responsive as they should be and the game is extremely unforgiving of mistakes. The difficulty level is also seems to spike at times and players may find that they will struggle on one section only to then breeze through the next act without any hiccup.

When heads are lost, players only have a short amount of time to reclaim them before they disappear but during some boss fights this is inexcusably made impossible by the heads just immediately flying off-screen.

Lose all of your heads and you’ll be forced to sit through an awful revival animation that I actually never want to see again for the rest of my life. Lose all of your lives and you’ll need to start the whole level all over again. It doesn’t leave you feeling like you want to persevere though, it just leaves you feeling cheated by poor game design.

On the whole, Puppeteer is not without it’s strong points but it is still a mostly uninspiring paint by numbers affair held together by some impressive visuals and a sleek layer of polish. It is a game without any real sense of identity. It takes a collection of old tropes such as pirates, races and magic and just tries to mash them together in the vain hope of creating something charming.

Puppeteer lacks the fun and broad approachability of New Super Mario Bros or Rayman Origins but also fails to invoke the imagination, creativity and dark humour of LIMBO.

It is always good to see a new IP and the visuals and presentation alone are worthy of credit but those looking for a good side-scrolling platformer are likely to find much better elsewhere.