NPC AI continues to be able to do things players cannot.
You may break your controller.

Dark Souls 2. What can one say about the incredibly popular sequel to one of the greatest games ever, aside from, ‘Arrggh, I hate you’. Well, you could say, ‘Hey, there’s more?’ because the second instalment of the game’s Lost Crowns DLC was released this week, to the furious howls of delight/fury of fans such as myself. 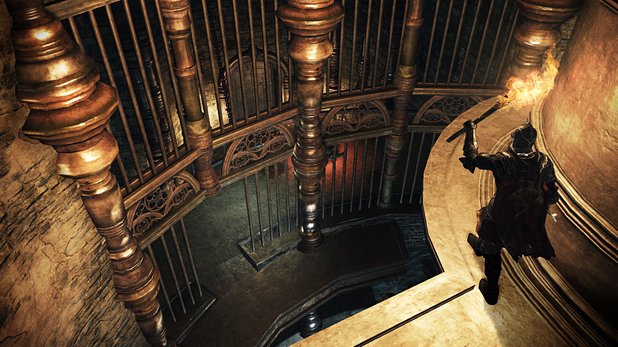 For those who aren’t aware, From Software are fleshing out the lore and story of the vanilla game by providing new adventures in ruined kingdoms other than Drangleic. In Crown of the Sunken King, players delved into the poisonous depths of Shulva, a heavily-Mayan inspired city of ziggurats and poison. And in Crown of the Iron King, we visit the world of the Old Iron King – a figure who anyone who played Dark Souls 2 will probably know as the lava Balrog – which is a realm of three huge towers that creak and crumble into the heavens.

Dark Souls was known for its intricate level design, with unlocked shortcuts being the tangible rewards for progress, something which some felt was lacking in the design of Dark Souls 2’s levels. Those disappointed fellows and fellettes would have been delighted with the first batch of DLC, with its hidden switches and traps, and they will be crying with joy at Crown of the Iron King.

At first, it is a journey down, following the crenulations of an ash-covered waste reminiscent of the Kiln of the First Flame from Dark Souls – something which should surprise no-one who has completed Dark Souls 2 in New Game+. You face aggressive hollowed soldiers, possessed armour, and men who have a bit too much affection for barrels, all of which are bolstered by whispering Ashen Idols. But it is when you find a certain item that the level comes to life: stationary platforms raise and lower, and new paths are opened up, meaning that I’m still finding items and shortcuts in my third playthrough.

One unique aspect which Crown of the Old Iron King brings to Dark Souls 2 is scarcity, in the form of a consumable item called the Smelter Wedge. These shards of a popular/incredibly cruel boss are the only way to kill the Ashen Idols, and you only get six from the beginning, whereas there are eleven Idols to trouble you. This puts an interesting tactical spin on your journey, and also adds another level of terror, as you never know which turn will cause a healing horror to leap from the ash.

The bosses, of which there are three, are for the most part interesting and varied. Yahtzee of Zero Punctuation’s criticism of ‘A Dude In Armour’ still stands, but two of the three bosses provide varied and kidney-bustingly tough experiences. I attempted the bosses solo and managed to do two out of three in this fashion, eventually giving up and summoning NPCs for the third boss whose glorious Nippon steel cut my poor character to pieces every time. Can you call this bullet time when bullets haven’t been invented yet?

The NPCs are another way in which this DLC stands out: there are multiple invaders who all have some of the best AI I’ve seen, being far more clever than many players I’ve fought. The standout moment was when one NPC invader ran behind some enemies, healed, and then waited until I thought they weren’t going to attack to run up and one-shot backstab me. The icing on the cake was that they mocked my failure. It was brutal, and glorious.

Fans of the original Dark Souls will find plenty to love in both of the DLC episodes so far, but will love Crown of the Old Iron King more, particularly with a famous Greatsword making an appearance. Fans of Dark Souls 2 will find an expanded lore, interesting enemies, and a different way to slowly go Hollow as you die over and over and over and over…