An incredibly pleasant surprise, that improves pretty much everything about UFO: Enemy Unknown, adds some beautiful graphics, ever so slightly refined game mechanics. Buy it if you loved the original game, buy it if you love the new X-Com. Just don't let the interface scare you off.

Wargaming and table top role playing has a long and proud tradition for community storytelling. After all, it is the human element, the emotions poured into these sets of statistics and random dice rolls that separate these games from being spreadsheets. This translated nicely in the early era of gaming, which effectively looked like spreadsheets, and so often you would get games such as the original Rogue (and it’s legions of spiritual successors) Civilisation, and particularly the original X-Com: UFO defence. 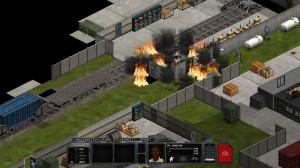 The standard end to most Xenonaut lives…

X-Com: UFO Defence (or UFO: Enemy Unknown if you’re a devious non-american) was a game that cultivated a massive following by virtue of balancing giving the player vast swathes of control and customisation, yet making them feel oppressed and powerless in the face of an enemy they initially know nothing about. It is about picking battles, being absolutely petrified and hoping fortune is in your favour, and it was an absolutely brilliant game for what is now known as emergent storytelling.

That was the standard narrative of UFO: Enemy Unknown, and it’s an atmosphere that spiritual successor Xenonauts aims to replicate, to the tiniest detail. For fans of the original X-Com, the review ends at this point. It is UFO: Enemy Unknown, set in the late 1970s with updated graphics and a slightly better interface. Buy it.

For the uninitiated, Xenonauts is a hybrid management sim/tactical RPG, set in a grim alternate Earth right at the peak of the Cold War. Alien activity begins to expand across the planet and so, to protect the earth from invasion, Xenonauts is formed, a multi-national military group dedicated to protecting earth from these attacks. There’s something always very legitimately unnerving about cold-war era sci-fi, and Xenonauts milks that for all it is worth. 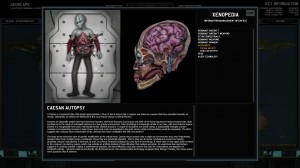 The detail in this game is intricate, even at times when you wish it wasn’t

The atmosphere at times is terrifying, with the thudding, militaristic soundtrack and the particular delight the flavour text seems to have in explaining the grotesque and macabre results of the laboratory’s autopsies and interrogations.

The game is as open and non-linear as it gets. Once you choose your base location, you’re left to your own devices with regard to basically all aspects of base management. There is a tutorial, but this is limited to a brief explanation of each of the mechanics of the game, and a little objective at the bottom right, one that can be ignored at will. That is the limits of hand-holding and linear progression the game holds.

The game touts itself somewhat ludicrously as a “Strategic Planetary Defence Simulator”, which plays itself in three main ways. The main screen is the “Geoscape”, which displays the world map and allows you to see UFO activity within your radar range, send out drop ships and fighter jets to intercept them in an Infinite Space-esque mini-game. Aesthetically it maintains the cold war bunker aesthetic, with the giant atlas bordered by various faceless workers and architecture elements. It is cold, unnerving and a great set up for the other game elements.

On top of this we have the base building mechanics. Your first base is set up with all the basic facilities you need although there’s still plenty of room for expansion. 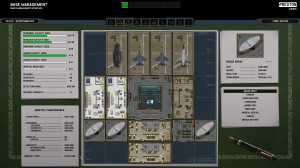 Home is where the fighter jets are…

Your basic facilities cover the standard basic buildings seen in strategy games,including living quarters, radar stations and hangers for both your transport aircraft and your fleet of fighters. All the buildings have customisable elements (well, with the exception of the Radar), but the three most used will be the barracks/transport craft screens and the laboratory. The barracks and transport screens show all the soldiers you have at your disposal, their statistics, the rather nice high definition full portraits as well as their respective loadouts. All the characters are randomly generated, although you can follow the good old roguelike tradition of naming them whatever you like, to add to the heartache when they die.

On the subject of death, the “ground combat” mechanic is the real meat of the game, where the game most resembles the original UFO: Enemy Unknown for better and worse. Your characters have a certain amount of time units per round based on various character stats and the weight of their weapons, allowing them to move a certain amount, fire their weapons, meddle with anything in their backpacks, or some combination of all three. The missions are varied in scope, difficulty and location, though mostly revolve around murdering all the slimy things before they laser the torso out of your eight brave men and women. Much like UFO, the game is very deliberately paced, with tense atmospheric music and the cloying fog of war making every step a risk in case an alien catches you unaware and sneaks in a quick volley, ending their trip before it has even begun. There are a lot of neat nuances to the ground combat, in particular the psychology system where some soldiers are more prone to panicking and fleeing the battlefield. All because some wuss ended up being in the way of his buddy’s machine gun fire and just happened to be turned into a living piece of Leerdammer. 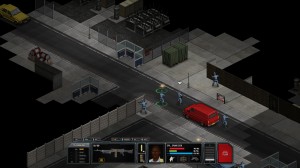 Every player’s game ends up filled with these great moments, where they came back from losing half the squad to raid theenemy UFO successfully, as well as the more common moments where everything that could possibly go wrong does. Like a stray light machine gun round hitting a propane tank, flash frying a good half dozen aliens and Xenonauts alike. The rewards though come in the form of a lot of different alien resources, which allows for the excellent and expansive research system to flesh itself out.

There is a fly on the ointment however with this game and that would come in the form of the interface. Most strategy games are fairly standardised in terms of standard controls. Xenonauts, on the other hand uses a slightly more intuitive form of the archaic control scheme from UFO: Enemy Unknown, where holding right click makes you turn around (which costs time units), the left mouse button doing everything, so a stray click may cause your hapless squad member to walk around in circles, wasting your turn. On top of this, there is the appalling climbing mechanics, where the simple task of climbing a flight of stairs involves moving to the foot of the stairs then changing the elevation, hoping your soldier is still in focus then clicking again to move up. Given the vast updates and improvements Goldhawk Interactive made to the game, it’s a tiny but conspicuous issue. 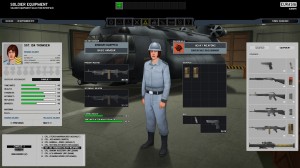 It has been five years since the game first began development, and many things have changed in the interim. Chief among which is the release of a fully fledged strategy game under the X-Com name, Firaxis’ X-Com: Enemy Unknown. The comparisions between the two games are as inevitable as they are pointless. X-Com is a big budget, blockbuster of a strategy game, streamlining the game as much as possible to make for a very intuitive experience, while Xenonauts has done its level best to maintain everything that made the original X-Com the milestone it was. I have played a lot of both for the purpose of this review, and honestly I’ll be playing a lot more of both, they both offer so much to discover, such atmosphere and such genuine freedom not only to pursue a goal, but to create one for yourself. As of writing, Xenonauts has just left the Early Access program on Steam, and for the sheer amount of content, of joy, of tension, of game you get, the game is one of the bargains of the year.