Rich world which blends cyberpunk, magic and fantasy.
Engrossing story from the creator of Shadowrun.

The best example of a digital version of a pen and paper role playing game yet.

Shadowrun Returns is a distinctly old-school styled RPG based on the pen and paper role-playing game. The setting for Shadowrun is essentially a mixture of cyberpunk and the fantasy trappings normally associated with Lord of the Rings.

The year is 2054 and due to an event referred to as ‘The Awakening’ there has been a resurgence of magic, awakening long dormant creatures and the appearance of other races: dwarves, elves, orcs, trolls, all referred to as ‘metahumans’. In this world technology and magic collide, with mega-corporations vying for more control and influence and trampling over those beneath them.

You play the part of a shadowrunner, a mercenary living in the shadows of this new world taking on jobs from anyone who will pay. When the powerful or the desperate need a job done, you get it done… by any means necessary.

After choosing your race from the several available, with different bonuses being available for various races -trolls are tougher, elves are more charismatic- it’s time to pick an archetype, of which there are several, but these are only a starting point.

Some of these will be familiar, but they are also somewhat different due to the world of Shadowrun, so while a mage may specialise in spellcasting they also carry a gun. Other classes include Deckers (hackers) who specialise in tech, hacking computers and jacking into the Matrix, Riggers who utilise drones for scouting and combat and can control machines, Shamans who use fetishes to summon spirits, Street Samurai warriors with cybernetics, firearms and melee weapons and Physical Adepts who use magic to boost their impressive close combat skills to survive. 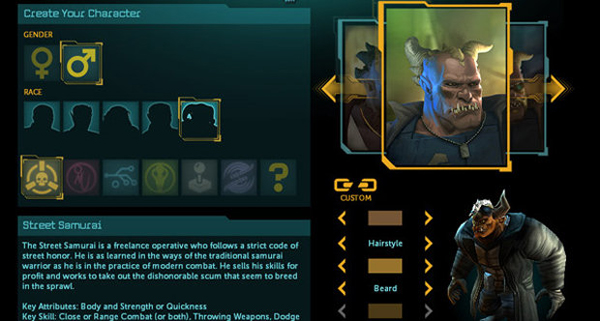 These archetypes distinguish a player’s initial skill set, these skills can then be boosted by earning Karma- the game’s experience points. Each of the several attributes has a corresponding skill set, and these attributes will have to be increased to gain access to higher level skills. This prevents characters maxing out one particular skill early on. Etiquette determines the demeanour in which your character talks and can open up otherwise unavailable options when talking to certain characters.

The setting is a rich world which has been crafted over two decades. As well as guns and magic there are also cybernetics which provide different boosts at a cost of both credit and Essence- life energy. Characters start with 6 Essence and different cybernetics will cost a different amount of Essence with characters being unable to go below 1.

The world of Shadowrun Returns is presented in an endearingly-painted 2D isometric view; whilst this isn’t the most intricately detailed or visually stunning game, the environments of future Seattle are atmospheric and it doesn’t take long to get sucked into the story, titled ‘Deadman’s Switch’, which has you investigating a friend’s death at the hands of a serial killer referred to as ‘The Ripper’ as you walk the rainswept streets.

From the start it’s obvious that Shadowrun creator Jordan Weisman and the rest of the Harebrained Schemes team have been more focussed on making an authentic Shadowrun game than making something flashy, in part as an apology for the awful FPS released a few years back. 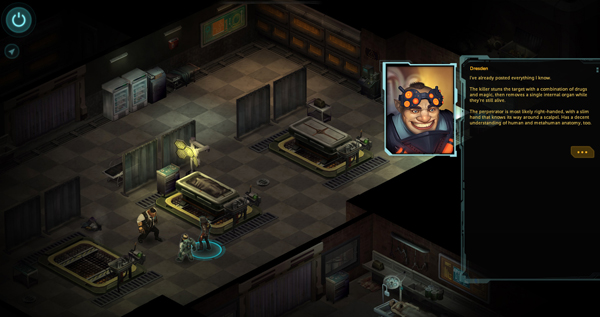 The music composed by Marshall Parker and Sam Powell -who worked on the SNES and Sega Megadrive game- adds a further dimension to the atmosphere.

This is a text-based game- new locations are introduced with evocative descriptions and talking to citizens, vendors and others on the streets will bring up an impressively rendered portrait along with dialogue options which can lead to clues or other interesting information.

There are occasional side quests and different approaches to certain events but the story is essentially linear in nature and those expecting an epic 50+ hour adventure will be disappointed as the story here will only last you 10 or so hours.

Moving through the world is real time, combat is turn based. Your character, and any others with you, take it in turns to use their action points to perform actions whether this is movement, casting a spell, using an ability, etc, before the enemy take their turn.

As for those wondering about Deckers, the world of the Matrix couldn’t be created in the same scale as would really be necessary, but to their credit Harebrained Schemes have managed to fit in some cool stuff for Deckers to do. There aren’t loads of opportunities to jack in, but when a player does the alternate world of the Matrix manifests with an avatar representing the player’s character as they enter the realm of cyberspace, where they’ll encounter Intruder Countermeasures (IC) which attack the player, and have to use programs with various effects and deploy Expert System Programmes (ESP) which are in essence creatures summoned within the Matrix to fight on the player’s behalf. Players have to be wary of overstaying their welcome though, as this may set off alarms both within the Matrix and the ‘meat world’.

Deckers’ abilities within The Matrix are determined by their decking skill and ESP subskill, along with their equipped cyberdeck, much the same as skills affect combat in the ‘meat world’. Action within the Matrix shifts back and forth with the ‘meat world’ so players can protect their Decker’s body from real world threats. 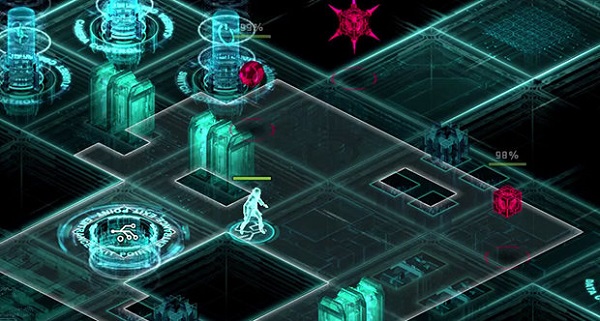 The world of the Deckers

There’s little in the way of looting, which may seem odd for an RPG, but characters are expected to find gear via dealing with shady merchants or using contacts rather than stealing from the dead.

Whilst combat itself is engrossing, especially when facing several enemies, there’s an anonymity to the other shadowrunners you can hire as you progress into the game. Aside from a few exceptions like Jake Armitage (who long time fans will recognise from the SNES game back in the day) and a few other characters, you don’t really interact with the hired guns who make up your party so there’s little reason to waste resources on them if they bleed out on a run.

Another problem is the game has no any time save function, only autosaving at the start of a new mission/chapter. This -whilst in keeping with the game’s oldschool approach- does lead to frustration and prevents re-doing missions a different way and experimenting with combat approaches.

The etiquette dialogue system doesn’t come in to play often but when it does, it does give you an empowering feeling when you manage to talk your way out of a potentially volatile situation or convince someone that they should give you something for free. 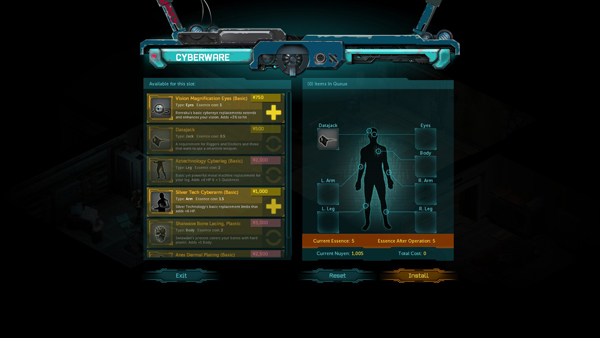 Cybernetics are available for a price

Shadowrun Returns also comes with a pretty extensive editor package, which allows techhead fans to create their own missions and campaigns which others can then play. It’s this aspect which really does lend the game essentially endless appeal. There’s already a large online community for Shadowrun, and with editor tutorials already popping up all over- Shadowrun Identity is just one site- fans can contribute to an epic campaign based on stories from the sourcebooks and novels and there’s already people working on the SNES and Megadrive games being recreated in the editor.

It’s this aspect that really taps into the idea of what Shadowrun has always been about: crafting your own story within the established world.

The only reason this game exists is because passionate fans paid for it, and the world of Shadowrun quickly becomes absorbing as you find yourself talking to intimidating and impatient trolls, who also happen to be detectives looking into your friend’s death, and dealing with elvish BTL (Better Than Life) dealers and various other characters.

Gamers oblivious to Shadowrun won’t be completely lost as the world is introduced in stages, although this game -quite literally in this case- wasn’t made for them, it was made for the people who already know these streets, and the few niggling problems are easily outweighed by the continuation of the Shadowrun world on a modern gaming platform and the best digital version of a pen and paper role playing game yet.

Don’t trust anybody, watch your back and never, ever, cut a deal with a dragon. Welcome to the sprawl.

Andy Haigh started writing to counteract the brain atrophying effects of Retail Hell, now it's an addiction. Andy is an unrepentant sequential art absorbist and comics are one of his passions. Other interests include Film, Music, Science Fiction and Horror novels and quality TV like Game of Thrones. He can talk about these at great length if only someone would listen. He lives a somewhat hermit like life in The Shire, spends too much time on social media and is still waiting to go on an adventure.
More Goodness
Reviews