Premium Japanese beer brand Asahi is bringing their super-slow motion video booth to an event near you!  On Thursday I got to spend some time trying out this pint glass shaped video booth that brings together the fun of slow motion video and marries it with the Japanese craze for purinto kurabu (print club) booths. 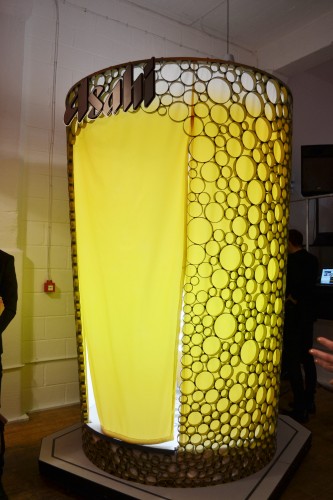 The booth, which can fit 4 people and took over 300 hours to create, has a couple of cool effects that contribute towards making each video unique. Firstly the booth shoots a jet of malt-infused condensation at you, this is supposed to give you the feeling of being inside a pint of beer. Its second and best effect is that it shoots ping pong balls at you, 100 ping pong balls to be precise, from a secret trapdoor. These I have been told are supposed to mirror the bubbles in a glass of beer. When the video has been taken, it is sent to you so you can post it on social media using the hashtag #AsahiSlowMo.

Asahi UK brand manager Samantha Catford, said: “We wanted to create an experience that’s fun, exciting, shareable but also one that conveys the crisp and refreshing qualities of Asahi Super Dry. The result is a world-first: a branded super slow-mo booth which takes the photo booth concept to the next level while linking to the brand’s unique qualities and reputation for innovation.”

After its unveiling the Asahi Slow-Mo Booth will begin a tour of venues and events all over the UK. I did ask at which events the booth will be appearing at and if there was any potential for the booth to be turning up at any conventions such as hyper japan etc. I was told that there it was something they were looking into, but nothing was finalised as of yet.