Starbound: To Infinity And Beyond

I’ve never played Terraria. And while I enjoy Minecraft, I’ve always been fairly casual about it, never one of those people building themselves replicas of the USS Enterprise. And when Starbound was released I genuinely had no intention of buying it. Then, as is so often the case with me, a friend suggested it might be a laugh to play together and I was suckered into an £11.99 purchase of an Early Access game. Which sounds like a bad plan. Especially considering that the last game I bought on early access was Godus, Peter Molyneux’s latest project that he claimed would “re-revolutionise the god game genre”. It was a massive disappointment and simply left me frustrated and without a clue as to what the hell I was supposed to be doing. Also, I’d never bought Terraria despite many people raving about it because, to me, it simply looked like a worse Minecraft. Minecraft is simple enough as it is, why would I go for a downgraded version. So, to summarise: bad history of Early Access, low opinion of related game and impulse buy. What a great way to enter a game.

But Starbound has gone above and beyond the call of duty. I cannot express how much this game has exceeded itself in my expectations. The essence of the game is this – take all the best bits of Minecraft, throw away the frustration, add in a sci-fi setting and inject the game with a truckload of character and intriguing backstory. Then you leap into this world and begin exploring to your heart’s content. There’s no problem of losing gear as, when you die, you respawn with all your equipment but instead incur a “pixel” cost, pixels being the in-game money necessary for higher level items. So no more edging around lava trying to get to that diamond sword hovering just out of reach. And speaking of diamonds, you won’t want to kill yourself trying to get enough for them to be useful. Starbound makes diamonds rare enough that they’re still of great value but not so rare that you can search endlessly without finding any. Though, that said, I currently have absolutely no idea what to do with them. But never mind, cos I’ve got copper trousers and crimson-lensed flight goggles that make me feel like Cyclops. And while you may see a fair amount of people with these goggles running around, you may not see so many with circlets on their heads. Because the copper helmet can only be upgraded into the Hatchling’s Circlet if, like me, you’re a member of the Avian race. Oh yeah, Starbound has races. 6 to be precise.

Quick rundown. Avian (Bird-People), Glitch (Robots), Apex (Ape-People), Floran (Flower-People), Hylotl (Fish-People) and Human. There is also a seventh race, the Novakid (Light-People) who have not yet been released. Each race has a unique backstory and though they don’t seem to possess any kind of racial abilities, not as yet anyway, there are items that are unique to certain races and your race can shape the look of crafted items, such as my goggles turning into the Circlet. So while it may not have a huge effect on how the game actually runs for you, it does provide a certain aesthetic appeal that lends itself to the well developed and somewhat surprisingly dark backstories that each of Starbound’s races possess. And aesthetics is something that Starbound does very well 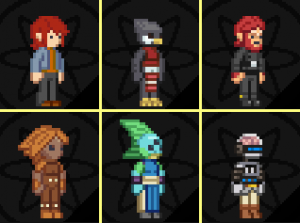 The procedurally generated worlds of the game, which make for near endless exploration, look incredible, lurid neon shades painting a landscape interrupted by strange looking trees and rocky outcrops. The world below ground is wildly diverse, ranging from slime to sand and all manners of oddness in between. One cave I found myself dropping into lakes of poison, 10 minutes later I was trudging through a sewer complex. And this is what it really comes down to. In all this beautiful diversity, there is one constant. The whole universe wants you to die. Every little dip in the ground, every wonderfully colourful puddle and every single damn one of the multitude of LSD fantasy looking Pokemon rejects that make up the worlds’ native inhabitants. I’ve spent a lot of time dying on Starbound.

But, to be perfectly honest, I don’t care. The fact of the matter is that Starbound rocks. This 2D world is beautifully rendered and thought out with intriguing backstory, great gameplay and a level of playability that is simply incredible. And death by death, cave by cave, it’s fascinating to see the worlds of Starbound expand as the game ever improves and your character grows ever stronger, building a world for themselves that is limited, clichéd as it may be, by your imagination alone.