previous
If you try one game this week, make it Broforce!
random
next
Check out the first 13 minutes of South Park: The Stick of Truth!
Video Games & Tech
1 like

I’m a little bit of a self-confessed Assassin’s Creed fanboy (you may spot this when my review of Assassin’s Creed: Liberation HD hits the site in a week or so), and I’ve followed the series since it’s inception, right the way up to Black Flag… including some of the mobile outings. So when I heard Ubisoft were releasing an Assassin’s Creed board game, it kinda caught my attention.

Announced on Thursday this week, Assassin’s Creed: Arena is the lovechild of Ubisoft and Cryptozoic Entertainment – the guys behind Adventure Time: Card Wars and The Walking Dead Board Game, among others.

Set in Constantinople, the game is made for 2-4 players, and is what Ubisoft describe as a “strategic game of cat-and-mouse” in a bid to get as many assassinations as possible. You can take on specific targets, or other players to gain more Victory Points. You can play as some of the Templars from Assassin’s Creed: Revelations, such as Shahkulu (the Renegade), Odai Dunqas (the Guardian), Oksana Razin (the Vanguard) and Anacletos (the Gladiator).

In terms of the target audience for the game, it’s directed towards ages 15+, mainly because there’s a lot of rules involved, so younger players may not grasp them very easily. 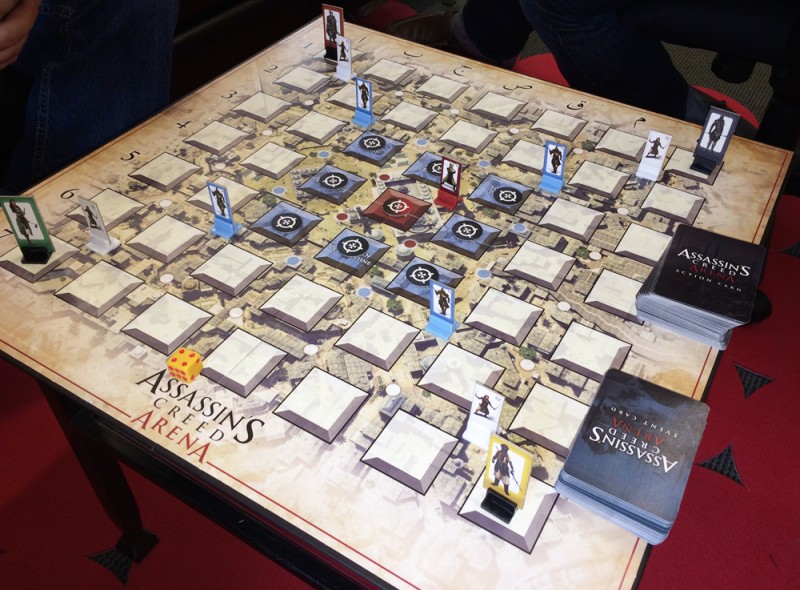 Setting up the board

This excerpt from Ubisoft’s blog gives us an idea about how the game plays:

To start each turn, an Event card is drawn. Sometimes this card will affect the entire board. Sometimes it will be just for you. Sometimes it will be an ongoing card that affects all players until the next ongoing card is drawn. After following all the specifications of the Event card, you’ll take your turn. You have three basic options: Move, Hide or Attack. In your hand you’ll have Action cards that tell you how many spaces you can move, or how many damage points you can deal in an attack. You can also hide where you are and draw a few extra cards. You do not have to move and attack in every turn.

You can use one card to move and if you land on a space with a target or another player on it, you have the chance to attack (unless there is a guard nearby, but I’ll get more into that in a minute). If there is no guard and you land on a target space, you can use as many attack cards as you need to kill your target and claim your Victory Points. See below for the PvP aspect of the game. 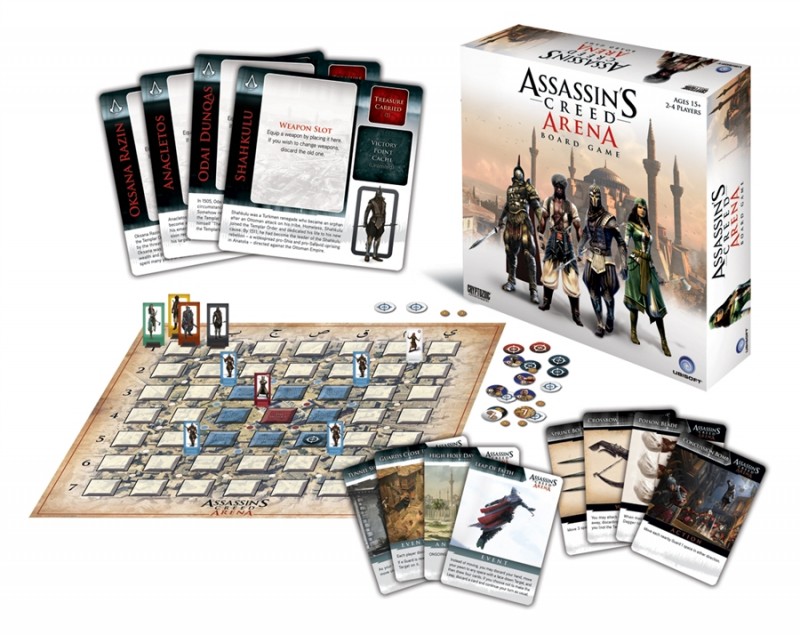 The game will retail for around $50 (that’s about £30), and will be available from 26th February. You can go and preorder it now from the official store over at Cryptozoic Entertainment, and you can read about the ins and outs of the game in much more detail over at Ubisoft’s blog.