So, you saw 2011’s Brannagh-directed Thor movie, yes? If yes, and you’re female you prettymuch swooned over Chris Hemsworth in the title role (some guys would too of course!)… and if you were a guy, you thought it was pretty cool (admit it… you want the armour and everything right? Yeah you do!) 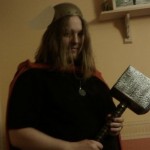 This was me prior to the costume finishing… but even with it finished I looked like a pillock!

Ok so maybe I was – and this was me in a completely terrible Thor costume for a friend’s birthday, looking like a total prat. But… there are some clever/insane people over at Hackaday.com that decided they weren’t going to stand for some cheap plastic knock-off, and wanted a proper Mjölnir replica.

This is where Caleb Kraft comes in… and this guy is truly dedicated. He’s the Senior Editor & Manager over at Hackaday, and has done some impressive builds in his time – from a Portal gun complete with a spinning, levitating companion cube to hacking the forthcoming Oculus Rift gaming peripheral.

Now Thor’s hammer is the stuff of legend – only he can wield it (even The Hulk can’t pick it up… much to my amusement in The Avengers), he can spin it around and propel himself great distances as though he’s flying and he can also use it to conduct and direct lightning.

Of course using it to fly isn’t really going to be possible, but conducting “lightning”? Well there may be something in that… and if there’s anyone that’s going to manage it, it’s Caleb. Firstoff… just check out the guy I’m talking about: 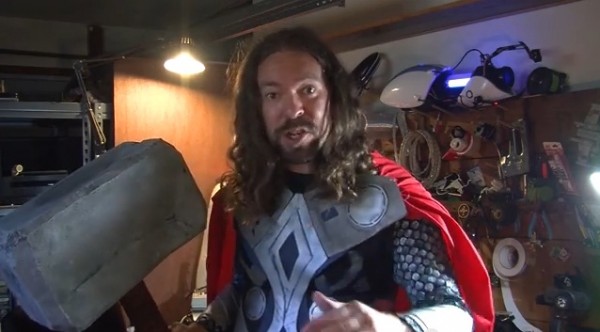 Caleb Kraft from Hackaday – looks a little mental, but the guy knows his stuff!

See what I mean? This guy is dedicated – and even has a great home-made Thor outfit that looks pretty decent if I’m honest… to quote Natalie Portman from the movie – “It’s a good look!”

Now when I mentioned lightning… of course I didn’t mean actual lightning – however Caleb has made his Mjölnir capable of discharging 80,000 volts of electricity! (see what I mean about insane?)

Anyway here’s the man himself showing you his work:

It’s definitely impressive (and frickin’ huge!), and if you’re interested in creating your very own Thunder God-worthy weapon, then head over to Hackaday to see how he made it!

Now I’m gonna go and get into costume, and ask all my local pet shops for a horse.

Movie and videogame geek, basketball player, guitarist, waffle connoisseur & expert in being a slacking bastard. You'll find me gaming on PS4 as "SpasmicPuppy" most of the time... I'm addicted to Destiny.
You might also like
breakingBuildChris Hemsworth