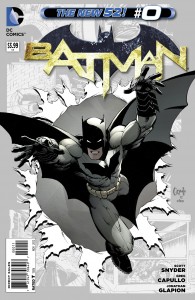 Less an origin story and more a slice-of-life for Bruce and Alfred, the Gordons, Tim, Dick, and Jason, mere weeks before Bruce dons the cowl.  Whilst the inevitable similarities to Batman Begins made me yawn, and Alfred didn’t have the deadpan humour I’ve come to love, Bruce’s exploits pre-Bat were entertaining enough.  Where this issue really shines is in the Robins’ stories:  genius hacktivist Tim is shown to be arrogant and cocky when dispensing his own special brand of justice, much like his nemesis Damien (whose story is covered in Batman & Robin #0); Jason’s outrage at a murder reminds us why he’s a good guy at heart; and Dick is… well, he’s a cocky motormouth, but we love him.  The thing about these backstories is they’re not just straight-up origins, or the backstory of a side character, or an adventure they had before the comic started.  Each little snippet actually makes you go, “Oooooh, that explains a lot…” which I like.  Gold star, Snyder. 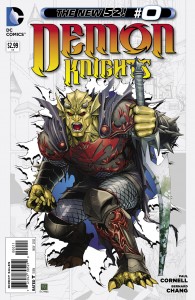 Fun fact:  I totally sat behind Paul Cornell at Kapow! last year, in the DC New 52 panel.  Good times.  Anyway, this issue delves into exactly how Jason of Norwich (who would later change his name to the much-sexier Jason Blood) managed to get bonded for all eternity to the demon Etrigan.  It’s a tale of the inescapability of fate, the darkness present in the human mind, and why Merlin is such a dick.  Despite going into some pretty dark places -Hell, for one- it never feels like it’s taking itself too seriously; just like a real fairy tale, it lets you enjoy the story without trying to coerce you into a dialogue about good and evil.  Sometimes demons are heroes.  Deal with it. 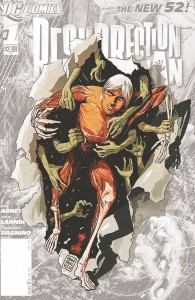 Taking a different stance on the Issue 0 concept, this issue takes place after #12, but with an extended flashback to the birth of Resurrection Man which manages to not only explain his origin, but also solve all Mitch’s problems and thus round off the recently-cancelled series.  Not that it’s definitely over for good- a demonic hint at “plans” for Mitch, plus his newly-revealed connection to Team 7, an elite squad which un-coincidentally has its debut released this week, and I suspect we’ll be seeing more of Mitch.  The loss of such a well-written and original series hurts, but you can’t kill Resurrection Man. 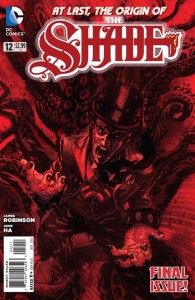 I’ve been incredibly fond of The Shade ever since his brief but charming appearance in Blackest Night, and I was disappointed when the ‘Shade’ we were promised in Justice League Dark turned out to be Shade, the Changing Man, and not The Shade.  And then I found his 12-issue miniseries, and all was right with the world again.  The miniseries has tackled gods, satanic/illuminati/masonic-style cults, Dickens, opium dens, the highs and lows of immortality, and evil old men.  True to this month’s theme, the final issue is an origin story, written as a retrospective from Dickie from the safety of his home, after all his adventures are over.  It’s more than an origin issue, however, it seems as though he’s managed to find answers from his encounter with the gods, and can now come to terms with everything and enjoy his life with Hope.  It’s a surprisingly touching end to a beautiful series.

The other DC comics

If calling Uncanny X-Men #31 a waste of money hurt me, this is killing me.  But sadly, Zero Month isn’t really doing it for me.  Some of the issues have been brilliant, most weren’t.  I think this is probably a personal thing for me, since I despise origin stories (especially ones that have been repeated more often than the word “baby” in a pop song- looking right at you, Batman) and a whole month of origin stories is making me want to gently massage my eyeballs with sand.  None of the issues -with the exception of Resurrection Man- have improved upon those that came before, and I think this whole exercise has not been a great move on DC’s part.  That said, there are some good offerings- Gail Simone writes an innocent and idealistic story for Batgirl, with just the right amount of menace beneath the surface, and Grifter has some gorgeous artwork courtesy of Scott Clark.  On the whole, however, disappointingly sub-par.

(My fun-filled ‘ALSO’ section will now sound tinged with hollow desperation, for which I apologise)

Guy Gardner- Sexiest Man of the Year, every year!  Find out why in Green Lantern Corps #0!

A vast improvement since its first issue: Before Watchmen : Comedian #3!

At the time of character creation, Laura Maier made the mistake of putting all her points in charm. While this was probably an unwise decision, it's served her well so far. Her power animal is the platypus.
You might also like
Batmanbreakingcomic books