“Don’t touch Lola”. Marvel’s Agents of S.H.I.E.L.D is ramping up the action quotient pretty quickly when it comes to series starting in the fall, and now we have a full, glorious trailer clocking-in at just under the 3 minute mark to make you drool further.

When previously we only saw quick glimpses of the characters and a sparse amount of action, this new trailer gives us a little bit more of both.

We see Agent Ward’s (Brett Dalton) induction into S.H.I.E.L.D and his shock at Coulson’s (Clark Gregg) re-appearance, as well as Agents Fitz & Simmons (Iain De Caestecker & Elizabeth Henstridge respectively, and no, she’s no relation to Natasha) in the field doing what they do best, along with Melinda May (Ming-Na Wen) kicking some ass Black Widow-style. An interesting addition to the team is Skye (Chloe Bennet) who initially wants to subvert Shield’s efforts, thinking they’re the bad guys.

What I’m really happy about is the superhero we saw in the teaser trailer is none other than Whedonverse favourite J. August Richards (Gunn from Angel, to the uninitiated), who I always saw as a really underrated actor from his time in Angel. With his appearance I’m really hoping we get a few more of Joss’ buddies involved… what I wouldn’t give for Nathan Fillion or Alan Tudyk to make a cameo appearance somewhere! 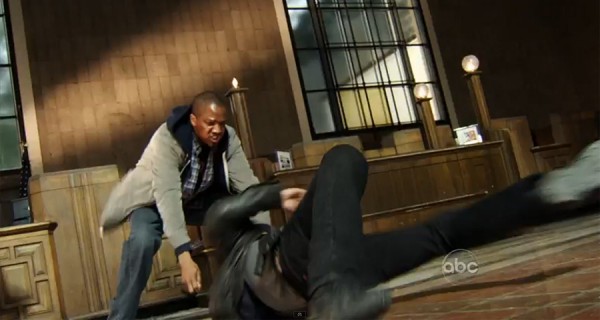 The trailer itself looks great, and appears to shift from the dramatic to humourous with ease, much like The Avengers. There’s some good lines in there too, like when Agent Ward is questioned as to what the name “Strategic Homeland Intervention Enforcement and Logistics Division” means to him, and his reply is “It means that someone really wanted our initials to spell out shield”.

I was excited about a primetime Marvel TV series, but also dubious it would end up being too cheesy when compared to shows like Fringe. Now I know taking impressions from a near 3-minute trailer isn’t going to give us all the information that we need, but after watching it I’m happy to say it looks like Marvel have delivered a lighthearted action series that may pack a punch.

Movie and videogame geek, basketball player, guitarist, waffle connoisseur & expert in being a slacking bastard. You'll find me gaming on PS4 as "SpasmicPuppy" most of the time... I'm addicted to Destiny.
You might also like
Agents of SHIELDAlan TudykAngel