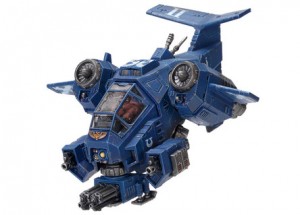 AND IM NOT HAPPY!

After a long leave of  absence from the world of WH40k, myself and a few fellow geeks decided to jump back in, build armies and fight to the death!   Not an easy task when you haven’t played in 20 years and the last rule set you looked at was the first ever one, but we struggled on, did it and fun is being had by all; painting, learning the rules and making fun of peoples  camp space marines, with pointy finger (I will name him EDWARDO!)

So why so annoyed Matt, whats up? You ok Champ?

NO I AM NOT! Things were going so well but today, GW released some new FAQs for their 6th edition rule set and I can no longer use my Stormtalon Gunships or StormRaven in my army!

Q: Land Speeder Storms, Stormraven Gunships and Stormtalon Gunships are all listed as Space Marine vehicles in the Reference section. Does this mean that every Space Marine Chapter now has

A: No – you may only select units and vehicles that are available in the army list section of your Codex. The one exception is the Stormtalon (as its rules were featured in White Dwarf), but it is only available to armies chosen from Codex: Space Marines.

But wait a minute Matt, Wolves can’t fly, you could never use them in the first place?

Not technically true, yes in 5th edition you couldn’t use them at all; the Storm Raven, for example,  was only in the blood Angel and Grey Knight Codex. I accepted that and was happy playing by the rules as set.. BUT then GW started gearing up to some new releases: the storm talon being one of them and of course the new 6th edition .

It is here where things start to get annoying for me. I reaaaaalllly wanted  flyers and with the release of the flyers edition of WD and the 6th edition rules I suddenly had my chance, thanks to typical GW ambiguities… YES!

So I now have 3 flyers and a nice happy grin on my face… well until today, when I suddenly have 3 expensive models that I can only use in my army IF they are an attachment of another army, which means having to choose another HQ and troop unit… umm WTF!

I can’t be the only person out there who saw these ambiguities and thought, “nice, we can use flyers now,” Then went out and bought some? The rules are the rules BUT get them right in the first place or at least state: “SW, CAN NOT USE THIS UNIT”, instead of leaving it open to interpretation, so suckers like me will spend their hard earned cash on units they can not use in the army they want to use them in!

In the end, I don’t play tournaments and the guys I play with, despite ribbing me about the fact I have 3 useless models now will be fine with me using them, but that’s not the point; the rules should have stated flatly, who can and cannot use flyers from the start.

With all the above said…I am still technically a noob at all this, despite being one of the first kids to have the Rogue Trader back in the 80s. So if someone can find me a line in the new 6th edition or the WD that states I couldn’t use these models then I will retract my rant, BUT I don’t think it is there and I think it is intentional, so chumps like me buy more stuff!

You know what? I’m going to use my flyers anyway, AND I’m going to paint them in the same colours as my Space Marine chapter.. HA!

Here are the blasted FAQs for the new 6th edition rules that were released.

From N.Ireland but now living in Manchester, England; Matt is the founder and CEO of Geek Pride. Interests: Photography, Music, Art, poetry, Military History, Model making and painting and of course gaming (table top and computer)
You might also like
Games WorkshopGWnews